‘Deep state.’ ‘Resistance.’ ‘Permanent Political class.’ Call it whatever you want, is that group using their position to help their friends and hate their rivals?

It’s no secret that the party that wants to put MORE power and money into the hands of the government bureaucracy, wrapping the nation in more and more red tape is in their best interest. From their perspective, that’s job security and professional advancement. Departments get bigger and managers get the prestige that comes with overseeing larger and larger departments or budgets.

For public servants to personally hold that bias is unsurprising, but for them to act on it to subvert the public will by replacing the checks and balances with expressions of their own political will? That’s crossing a line.

Unfortunately for the American voting public, that line is one they are becoming increasingly comfortable with crossing.

For example, some politicians in Joe Biden’s home state were careful not to do anything to hurt his chances of winning … even if that meant exposing allegations of political corruption and illicit foreign influence involving Joe Biden himself.

Last summer, federal officials in Delaware investigating Hunter Biden faced a dilemma. The probe had reached a point where prosecutors could have sought search warrants and issued a flurry of grand jury subpoenas. Some officials involved in the case wanted to do just that. Others urged caution. They advised Delaware’s U.S. Attorney, David Weiss, to avoid taking any actions that could alert the public to the existence of the case in the middle of a presidential election.

“To his credit, he listened,” said a person involved in the discussions, reported here for the first time. Weiss decided to wait, averting the possibility that the investigation would become a months-long campaign issue.

…The probe, which is focused on possible tax law violations, has also examined Hunter Biden’s business dealings with foreign interests — a topic that has animated Biden detractors — and its existence first came to light amid a controversy about the leak of Hunter Biden’s laptop files. Since then, the case has become a political football: Some critics have suggested that the Trump administration’s political agenda influenced a parallel federal probe that scrutinized Hunter Biden in Pittsburgh, while some Republicans have called for the appointment of a special prosecutor to shield Weiss’s investigation from the influence of the Biden administration.– Politico

Politico’s glowing description of the impartiality of the players involved would be easier to take at face value if it weren’t for stories like this: 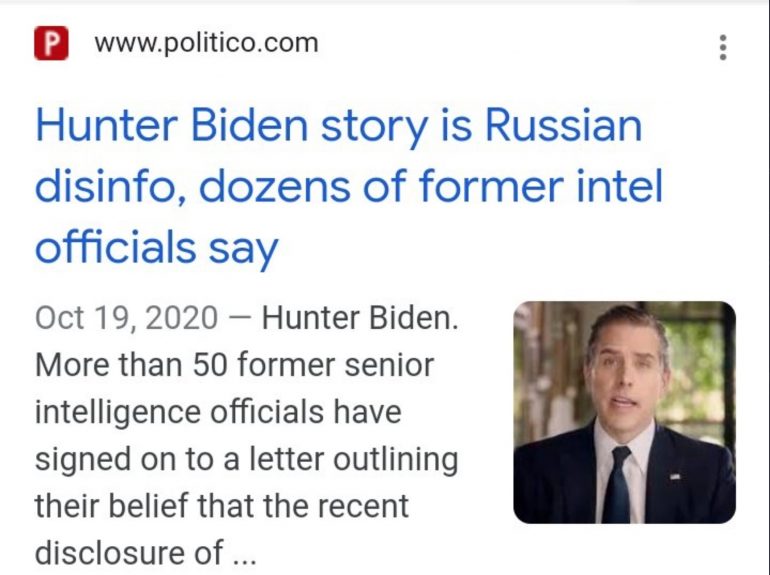 Not every journalist has their heads so far up this Administration’s collective backside they could see daylight at the other end.

These two didn’t seem quite so impressed as Politico by that so-called ‘restraint’. 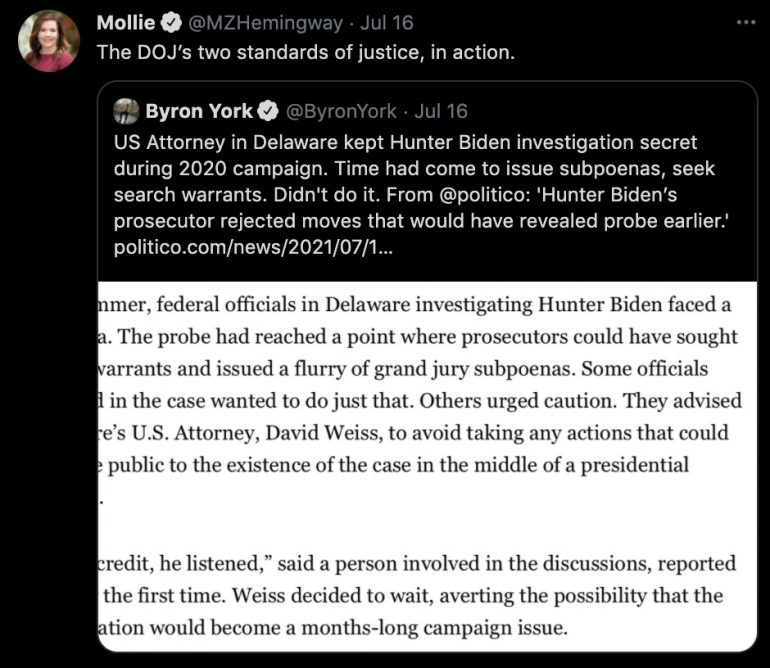 Maybe it’s because they remember how Democrats leveraged unfounded allegations against Trump (and his son) during the 2018 midterms though endless allegations about Russian Collusion, and a Mueller investigation that knew within weeks or months at the most that the allegations against the President came by way of informants paid by his political rivals, and were entirely motivated by political animus. And when that gavel changed hands, Pelosi used power to her advantage, to unleash all hell against Trump’s Administration.