Between a couple of collisions and a catastrophic fire, Congress took an interest in finding out the current battle-readiness of the US Navy. What they found was troubling.

In the words of one unnamed active-duty lieutenant that they interviewed, ‘sometimes I think we care more about whether we have enough diversity officers than if we’ll survive a fight with the Chinese navy. It’s criminal. They think my only value is as a black woman. But you cut our ship open with a missile and we’ll all bleed the same color.’

What did they find? Something changed in the navy with the end of the Cold War. Other departments were prioritized as desert warfare became the main concern for a couple of decades. The navy was ‘last to the trough’ when it came for funding. As a result, they are lagging behind where they should be in funding.

But something else happened with that extended period of warfare that left the navy component out. There was a shift in attitude. A shift of priorities. A shift in culture.

Suddenly, being battle-ready wasn’t so critical to what the people who mattered considered ‘success’ as progressing to that next rank. It created a culture ripe for those attracted to the life of a careerist.

Here are some of the issues that were raised in their 20+ page report.

The opening paragraphs set out what the intent of this report was to discover. 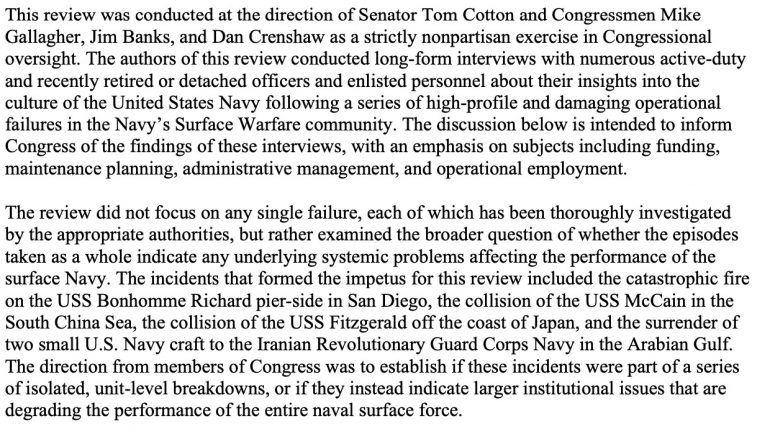 It wasn’t intended to be partisan. It wasn’t about blame-shifting. It was about identifying areas of weakness and offering corrections to make the navy better optimized to achieve the purpose for which it was designed — namely, be the kind of lethal fighting force that keeps our enemies awake at night.

They found some problems. Big ones. 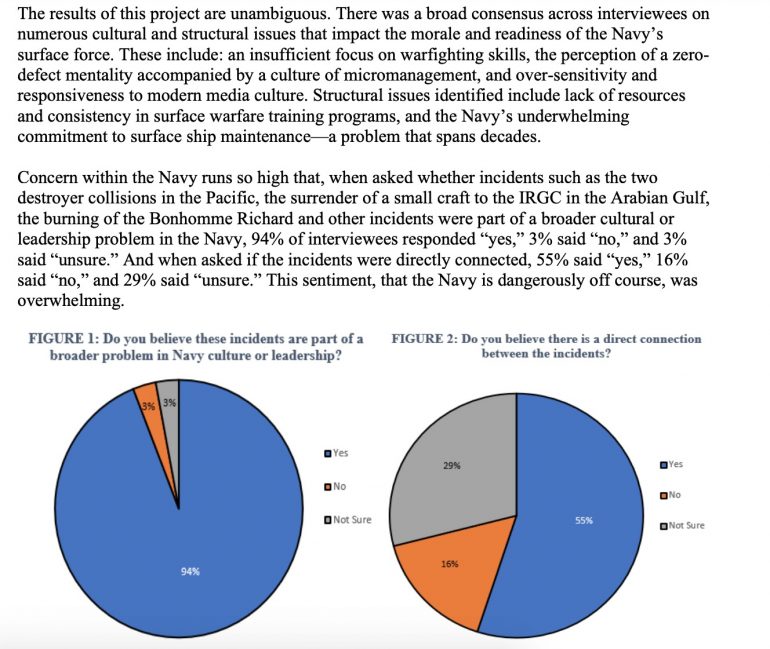 Because they are so concerned with peacetime duties, and all kinds of makework training demanded by this or that level of leadership, government or whichever, when time crunches force hard choices, it’s the battle-readiness that is glossed over so that boxes for the other administrative requirements checked off.

As a result, the navy has not been developing the kind of skilled ship-handlers they require. Worse still, the culture of micromanagement has not created a culture of independent leadership.

‘…lack sufficient resiliency…’ and ‘…unprepared for the difficulties in combat…’ have never been the sorts of terms used to describe the world’s premier fighting force. Perhaps this ‘…deemphasized persistent exposure to adversity…’ is not the sort of culture that serves the navy’s objectives well.

When asked, they are quick to affirm that they are up to speed on the latest social training, but when it comes to education more military in nature, they suggest there is a long way still to go.

‘What are the things the Chinese are concerned about? What are the things the Iranians are concerned about? [The] Intel folks know that, but like there’s no general education about, ‘what are the wars we could fight, and how do we understand the context of these so we get in combat.’ WE can have both the cultural and political understanding as well as the warfighting implications. And to me, if we’re focused on the front-line warfighting, we should know the worst we’re going into and what the greater context is. There’s none of that right now’ While this lack of attention on likely adversaries could well be a local problem rather than service-wide, it was a theme that manifested throughout the interview process.

There are all kinds of ‘non-combat curricula’ that while they may be worthwhile or noble in their intent, they consume valuable training resources. As a result, the report continues, ‘both Congress and Navy leaders risk sending them into battle less prepared and less focused than their opponents’.

This new class of peacetime leaders tends to be zero-risk because the culture of the leaders above them have a risk-averse bias that rewards the play-it-safe captains who shy away from high-risk-high-reward decisions.

There is a one-and-done attitude toward failure that would have robbed us, as this report points out, of some of the greatest naval leadership we had in WWII if today’s standards were in place back then.

Another big area was the role of politics and the media.

Here are the first 3 of the 8 recommendations brought forward by the report.

If all signs are pointing to the real possibility of squaring off against a bellicose China sooner rather than later, we can’t wait until after the crisis rises to decide it’s time to snap into fighting form.

Especially when China’s leadership boasts that their fleet is growing by the size of France’s entire navy every single year.

Chinese Official ‘We Are Driving America To Its Death’, Speaks Freely About Plans Of Domination & Conquest
WTF: ‘Woke’ New Navy Pledge Will Have You Cursing Like A Sailor

HEY JOE: China Just Made A Bold Military Statement … How Are You Planning To Answer It?

CHINA WATCH: Open Threat Of War Against Our Pacific Ally … Now What?

If Politicians Want Infrastructure Spending — Why Not Reboot Our Shipyards?

The U.S. Military Is Being Politicized For Social Media ‘Clout’ And It Needs To Stop