Was Bill Barr there to clean out the swamp, or to maintain it? For a while, it was looking like he was one of the good guys, but this letter levels serious allegations against him.

It is a matter of public record that Barr and Trump seemed fairly well aligned at the beginning of Barr’s term, but they were miles apart when Barr left.

Trump’s claim of election malfeasance was obviously a point on which they deeply disagreed. Now a letter has surfaced which casts Barr’s role in a whole other light, one in which it raises questions of whether Barr had any interest at all in making sure the elections process — which already had some catastrophic SNAFUs even during the various primary votes — was watched with any seriousness.

This letter says nothing about Barr’s motives, to which defenders and detractors could assign a wide range of meaning — from attempting to keep his office from being seen as an extension of Trump’s partisan will on one end, all the way over to being complicit with a rogue bureaucratic establishment at the other.

What this letter, written to Trump by a Pennsylvania DA who worked under Barr, does enlighten are the instructions and parameters under which the DA was permitted and expected to do his job. The fact that he has since prosecuted (and won a conviction) on a case against a Judge of Elections in South Philadelphia stuffing the ballot boxes after being bribed by Democrats, what he alleges in this letter is, to understate it, ‘troubling’.

In the context of the chaos of the last election, this information is surely something the President would have liked to know while there was still time to do something about it. This is the kind of question that, at least ONE half of Congress would want to know more about.

Here is the letter, written last month, that Trump has since made public. (Transcript to follow for those unable to read the screenshot on their devices.) 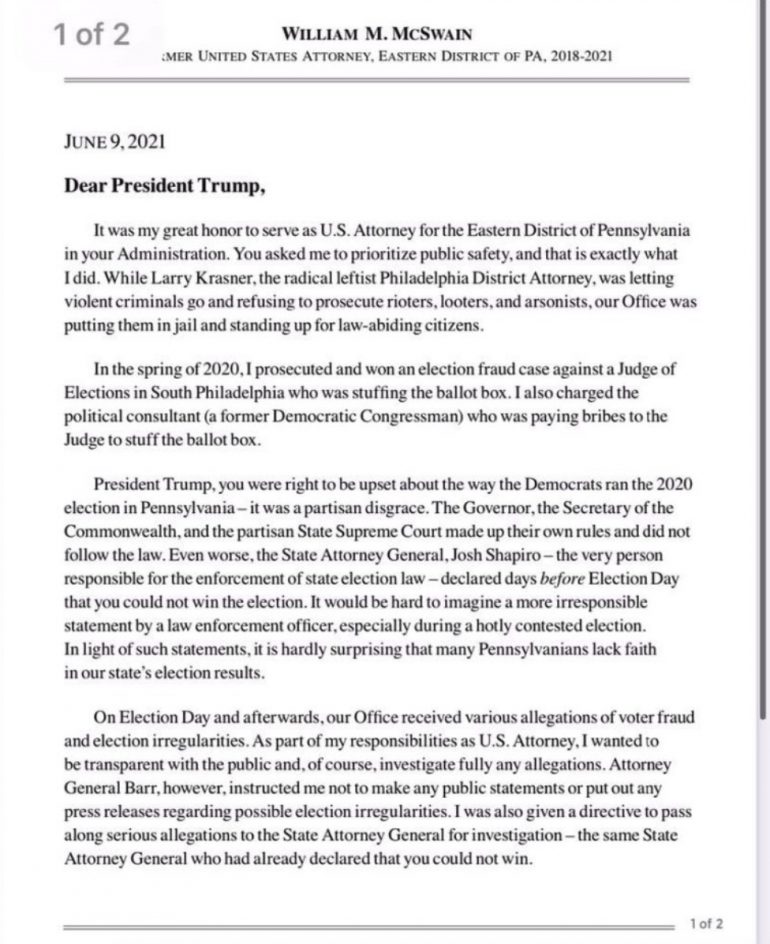 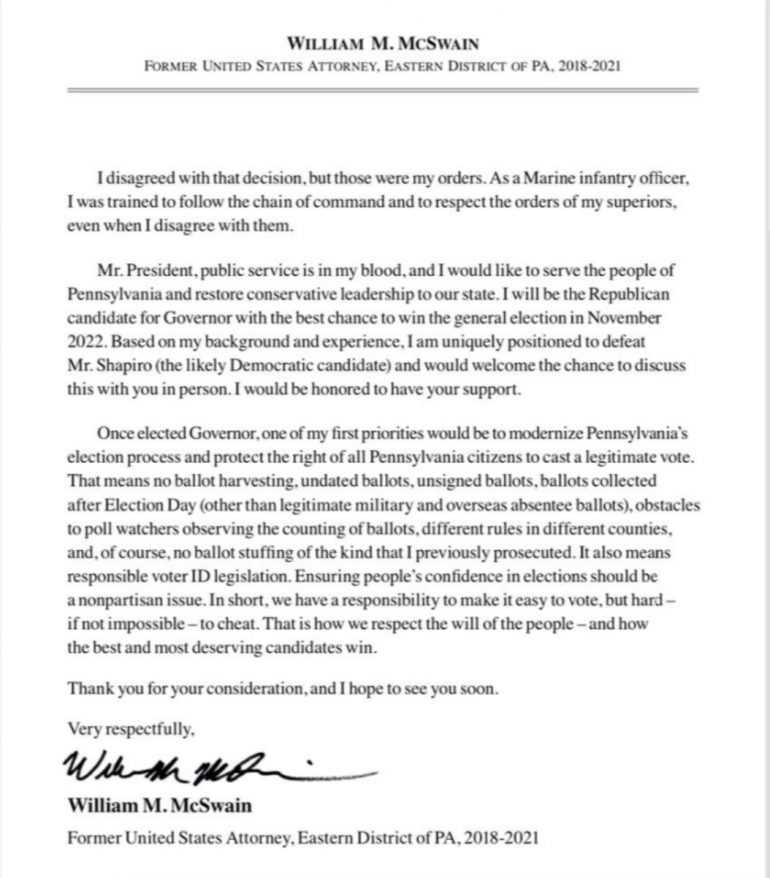 It was my great honor to serve as U.S. Attorney for the Eastern District of Pennsylvania in your Administration. You asked me to prioritize public safety, and that is exactly what I did. While Larry Krasner, the radical leftist Philadelphia District Attorney, was letting violent criminals go and refusing to prosecute rioters, looters, and arsonists, our Office was putting them in jail and standing up for law-abiding citizens.

In the spring of 2020, I prosecuted and won an election fraud case against a Judge of Elections in South Philadelphia who was stuffing the ballot box. I also charged the political consultant (a former Democratic Congressman) who was paying bribes to the Judge to stuff the ballot box.

President Trump, you were right to be upset about the way the Democrats ran the 2020 election in Pennsylvania — it was a partisan disgrace. The Governor, the Secretary of the Commonwealth, and the partisan State Supreme Court made up their own rules and did not follow the law. Even worse, the State Attorney General, Josh Shapiro — the very person responsible for the enforcement of state election law — declared days before Election Day that you could not win the election. It would be hard to imagine a more irresponsible statement by a law enforcement officer, especially during a hotly contested election. In light of such statements, it is hardly surprising that many Pennsylvanians lack faith in our state’s election results.

On Election Day and afterwards, our Office received various allegations of voter fraud and election irregularities. As part of my responsibilities as U.S. Attorney, I wanted to be transparent with the public and, of course, investigate fully any allegations. Attorney General Barr, however, instructed me not to make any public statements or put out any press releases regarding possible election irregularities. I was also given a directive to pass along serious allegations to the State Attorney General for investigation — the same State Attorney General who had already declared that you could not win.

I disagreed with that decision, but those were my orders. As a Marine infantry officer, I was trained to follow the chain of command and to respect the orders of my superiors, even when I disagree with them.

Mr. President, public service is in my blood, and I would like to serve the people of Pennsylvania and restore conservative leadership to our state. I will be the Republican candidate for Governor with the best chance to win the general election in November 2022. Based on my background and experience, I am uniquely positioned to defeat Mr. Shapiro (the likely Democratic candidate) and would welcome the chance to discuss this with you in person. I would be honored to have your support.

Once elected Governor, one of my first priorities would be to modernize Pennsylvania’s election process and protect the right of all Pennsylvania citizens to cast a legitimate vote. That means no ballot harvesting, undated ballots, unsigned ballots, ballots collected after Election Day, (other than legitimate military and overseas absentee ballots) obstacles to poll watchers observing the counting of ballots, different rules in different counties, and, of course, no ballot stuffing of the kind that I previously prosecuted. it also means responsible voter ID legislation. Ensuring people’s confidence in elections should be a nonpartisan issue. In short, we have a responsibility to make it easy to vote, but hard — if not impossible — to cheat. That is how we respect the will of the people — and how the best and most deserving candidates win.

Thank you for your consideration, and I hope to see you soon.

Is this a case of shameless self-promotion of a politician seeking an important endorsement? Is this a case of CYA? Or is this an honest public servant sharing ‘the rest of the story’ with a President he believes may have been ill-served by the process that is supposed to secure honest elections?

Again, the conviction for Democrat ballot stuffing does change the math on this allegation — as well as the ‘free and fair election’ mantra we’ve heard from our social media overlords.

What say our readers? Feel free to hash it in the comments.

Was Bill Barr’s service as AG, good, bad, well-intentioned but misguided, or a mixed bag?

Is this letter the real deal, or political maneuvering?

To borrow the words of a famous slogan, ‘we report, you decide’.