They probably think this is cute and cheeky, but that’s not how it’s coming across…

The San Fransico’s Gay Men’s Chorus decided to stick their thumb in the eye of anyone who refuses to overtly celebrate same-sex attraction by singing a song mocking parents who don’t want their kids immersed in discussions about sex from early on.

The song is called, “A Message From the Gay Community” and it includes the lyrics “We’re coming for your children.”

Here’s a short clip that was circulating on Twitter, because, frankly, it’s kind of a lot to take in all at once.

“Don’t worry guys, we just wanna be able to marry one another” pic.twitter.com/HHgfanF3UM

We’ve gone from a Pride parade, to Pride Week, to Pride Month, and in the Canadian Woketopia, it’s Pride Season. (No, it’s not like “hunting season” and shame on you for thinking that!)

But that’s not enough. You must celebrate that some people want to shallowly center their entire identity on where they prefer to achieve their orgasm. If you don’t, well, they’re going to “convert your children” … then they’ll “make an ally of you.”

Are these people are claiming to speak for all gay people? Just consider the chutzpah — or ignorance — it takes for these folks to assume that all gay people are on board with extreme, authoritarian leftism. I’m gonna go out on a limb and assume that’s probably not the case with former Director of National Intelligence, Ric Grenell.

Here are the full lyrics:

(At first, I didn’t get why you’d be so scared of us turning your children into accepting, caring people but I see now why you’d have a problem with that.)

Just like you worried
They’ll change their group of friends
You won’t approve of where they go at night (to protests)
And you’ll be disgusted (So gross)
When they start finding things online
That you kept far from their sight (Like information)
Guess what, you’ll still be alright

Come on try a little Pride

Well… it’s a good thing that doesn’t look creepy and predatory in any way.

Just in case that’s removed, here is the link to the original San Francisco Gay Men’s Chorus “Wired Pride 2021.” The original post with link for the song was removed by them because it was getting blasted into oblivion on social media.

It’s a bold song for the songwriters considering that the duo that wrote this, Tim Rosser and Charlie Sohne, had to apologize last year for writing a musical glorifying the sexual abuse of Afghan boys. 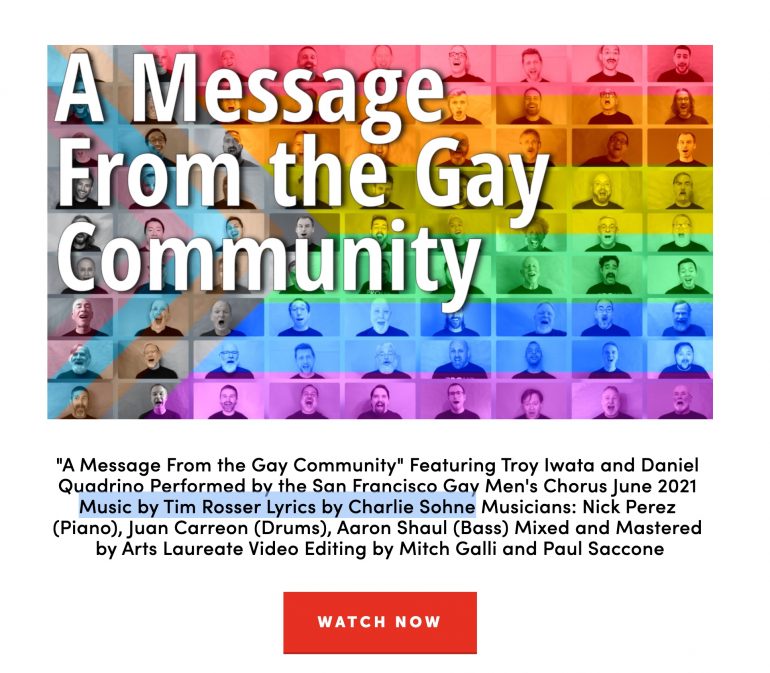 If you don’t know what Bacha Bazi is, ClashDaily covered it back in 2017.

Here’s a short video about the sick practice.

That is what these “LGBTQ activists” were “accidentally” glorifying.

If these songwriters thought that the exploitation of poor, young boys and forcing them into the sex trade is “empowering” and embracing their LGBTQ identity — and then romanticizing it in a musical — then it’s probably fair to question their judgment.

And they’ve said that they’re coming for your children…but it’s ok because they just want equal rights and an end to bigotry, right?

Does that mean that members of the LGBTQ crowd are roving around looking for young children to rape? No. But they are clearly trying to indoctrinate them into leftist identity politics.

Although, it is important to note that there has been a very close tie to leftism and pedophilia — including the pushback against age of consent laws. Pedophiles in the U.K. who wanted to lower the age of consent in the 1970s were supported by so-called “progressives,” David Thorstad, the founder of the pedophilia/pederasty group NAMBLA (North American Man/Boy Love Association), was a communist, and the French philosopher/historian/literary critic Michel Foucault — from whose theories came Critical Theory, the root of Critical Race Theory — was known to rape young boys in a graveyard in Tunisia in the late 1960s.

The absolute disdain for parents and their ability to determine what is and is not age-appropriate to discuss with their children is also quite apparent. It’s astounding that there is such a push-back on keeping children innocent and not sexualizing everything in society.

What happened to live and let live? What happened to what you do in your bedroom is your own private business? Could we go back to that maybe, instead of having the LGBTQ+ agenda being shoved at us 24/7?

For a group that is explicitly demanding that the respect the world “owes” them amounts to accepting them as they are without trying to change them or make them conform to social norms they do not accept, they sure are spending a lot of effort in making the rest of the world change, and conform to their revised idea of “social norms.” You don’t really get to have it both ways. The respect you claim to want is supposed to be a two-way street, isn’t it? Or has your real goal been exerting power over others all along?

Perhaps centering your entire identity around your sexuality kind of makes you look like a shallow person and well, uninteresting.  Who wants to befriend someone who only talks about one thing all the time? It’s tedious.

Have you considered the possibility that maybe just living your lives as normal human beings who happen to be gay could be enough? That’s actually what would bring the tolerance that the LGBTQ crowd wants. If indeed that is what they want.

UPDATE: The SF Gay Men’s Chorus is going after “far-right” websites that dared to publish and critique their cheeky little “joke” song.

They issued a statement on July 8.

An Important Message to the Chorus Family. ❤️ pic.twitter.com/XBpSY6r4j7

In case they delete this, too — because that seems to be who they are — here is the full transcript of the statement:

On July 1, we posted “Message from the Gay Community” to SFGMC TV and across social media. It was chosen because of how loved it was when we performed it live here in San Francisco at Pride, SingsOut, in South Carolina and at the Pride Showcase. The piece was commissioned by the Oakland Symphony who shared it with us.

The far-right conservative media found our “Message…” video and have taken it as their cause. This has all happened in the last 24 hours and it continues to pick up steam. They have taken the lyrics out of context to support a narrative that suits their intolerant and hateful needs. It is obvious the tongue-in-cheek humor is lost on many. As a result, we have seen the user comments on YouTube, Facebook and Instagram become increasingly alarming. Emails to individuals and the chorus office are vitriolic — including threats of harm.

We feel the first action we must take to keep everyone involved with the chorus and the making of this video safe is to turn the video to private. We are communicating with law-enforcement both locally and nationally. We will not be threatened and we follow legal steps to act on those threats. We will always accept others who may hold different values, but when violence is their choice of expression, since 1969 we have not backed down. After decades of children being indoctrinated and taught intolerance for anyone who is “other,” from using the Bible as a weapon to reparative therapy, it’s our turn. We have dedicated ourselves to being role models, teaching, and spreading the message of love, tolerance and celebration through our music.

Our second action is to work to control the narrative. The video is being illegally copied and placed on YouTube, Instagram and other websites. Others have the right to follow Fair Use laws, but that is not what is happening here. Therefore, our social media and marketing staff are working around the clock to alert moderators at YouTube, Instagram, Facebook and to file DMCA’s (take down of websites featuring stolen content). So far, this has been very successful.

Gee, it seems like they’re a little bit “Christophobic” and intolerant of conservative views. They want to actively convert you away from your beliefs and pressure you to not just accept but celebrate their sexuality.

Here’s a Pro Tip for the SFGMC — When you put something out there publicly, be ready for criticism.

ADDITIONAL UPDATE: It would seem that 4Chan users are now digging through to see if some of the members are sex offenders… and it appears that some of the names and photos match.

Turns out many of them are registered sex offenders

They took down the video pic.twitter.com/rqCzZ4TfCP

one guy even made a musical about bacha bazi

the afghan art of fucking boyshttps://t.co/nEgzQEMF7h

He left a bathroom sex review site too pic.twitter.com/uh03FYfjhU

One Twitter user, Dank Knight summed up the backlash against the Chorus well…

Pro tip: Nobody believes you’re standing for what you think is right whenever you turn off comments