Who are you going to believe — the Biden-Harris White House denying inflation or your own lying eyes?

The White House tweeted out a pun-heavy message celebrating a whopping $0.16 savings for a July 4 BBQ. The message read, “Planning a cookout this year? Ketchup on the news. According to the Farm Bureau, the cost of a 4th of July BBQ is down from last year. It’s a fact you must-hear(d). Hot dog, the Biden economic plan is working. And that’s something we can all relish.”

While the wording was cringeworthy, the message was absolutely tone-deaf.

It comes across as, “Behold peasants! We, the all-powerful Biden-Harris administration, have saved you $0.16! Take your coinage as you wallow in the mire as befitting your station and don’t forget to be grateful!”

Who thought that this was a good idea?

I’ll remind you that it probably took a team of people to create that gif and tweet, and they were all paid with taxpayer dollars.

Also note that they use “cookout” a term predominantly used in certain demographic circles rather than the universal term “BBQ”. It’s pandering from the old white guy in the White House who can’t stop making racial slurs and whose son casually drops the n-word when talking to his lawyer.

Pandering aside, the strangest thing about this tweet is that it’s clearly not true.

The Bureau of Labor Statistics has shown that inflation is on the rise. 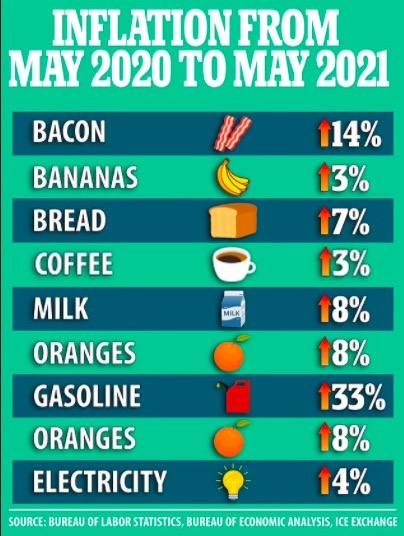 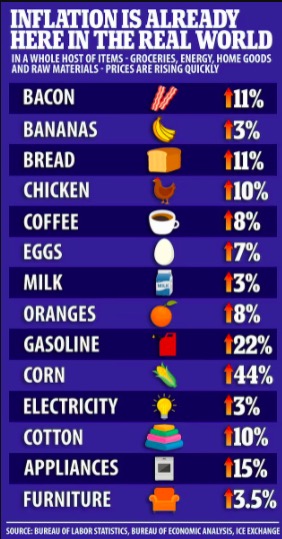 It’s not just the Bureau of Labor that is warning about inflation.

Several critics noted that the savings tweet flew in the face of recent reports from the US Department of Agriculture (USDA) – which recently stated that the consumer price index for grocery store and supermarket food purchases was up 0.7 percent over May of last year.

The USDA also projected that grocery store and supermarket prices would increase between two and three percent this year.

Furthermore, gas prices are on the rise – wiping out the savings with the gas price rise.

The AAA reported on Thursday night that the national average price for a gallon of regular gas had risen to $3.12, the highest it’s been on Independence Day weekend since 2014.

‘That is a stark increase over last July 4 when only a quarter of stations were selling gas for more than $2.25.’
Source: Daily Mail

Heck, we all see it with our weekly grocery bills going up.

With the Congressional Democrats’ Biden-Harris-approved spending frenzy, it’s only going to get worse, but they’re telling you to be grateful for $0.16 savings on one meal.

When Trump cut taxes for businesses and they paid $1,000-$2,000 bonuses to their employees, House Speaker Nancy Pelosi called them “crumbs.”

Remember when $1,000 worker bonuses during the roaring post-tax reform economy were “crumbs”? https://t.co/V7oviM29cE

Comparing prices to last year when there was a massive global pandemic wreaking havoc with supply chains… and then noting just 16 cents in savings this year, seems like advertisting a big L? https://t.co/3r7G29t4fH

Back in Joe Biden's day, $0.16 could buy you a pack of Bazooka Joe and three packs of Camels, so be grateful https://t.co/twLSgveXHG

First of all not true. Second, what genius thought, “Hey let’s put out a tweet showing people how they are saving $.16 cents over last year.” Are you serious?? Sixteen pennies, you dirty little peasants and be grateful!! https://t.co/5RnLH5P7dz

Biden has saved us

His plan is working

I'm going to set up a retirement account with mine https://t.co/OhM3A2lAxB

B. It’s a lie. Things are more expensive and prices are rising. https://t.co/LDf2ESj6PM

Driving to the grocery store is way more expensive. https://t.co/AqnTneSOgO

What does it cost you to drive to the grocery store now? https://t.co/UThmvKDyHW

Enjoy your 16 cents, peasants, while we yacht in St. Tropez https://t.co/HkWsXIzAh7 pic.twitter.com/jWiiLU2SOS

If President Trump were in the White House…

We wouldn't have huge spikes in homicide & violent crime (except in Dem cities, sadly)

We wouldn't have a 21-year HIGH in illegal crossings

And we wouldn't be celebrating pennies in savings as inflation everywhere else SKYROCKETS⬇️ https://t.co/cRFZFqW1M9

Still laughing about this. Sixteen cents. And of course it includes ice cream. Beyond parody. https://t.co/2FOuZ0A0Pr

Amidst the mockery, someone can still ask the truly important questions…

Who the hell eats pork chops, a bowl of ground beef, and sliced cheese for Independence Day? https://t.co/VSn26OjWlP

Yep. That’s pretty weird. Almost as weird as the Biden-Harris team thinking that this tweet was a good idea.