When Trump tried to revoke drama queen Jim Acosta’s press pass because he mauled a female staffer for the microphone, this was a grave threat to journalism.

When he called the press ‘fake news’ — even though much of the news they reported was actually proven to be bogus — he was ‘dangerous’.

At every turn, the ‘firefighters’ in the press gallery played the dutiful martyr. Meanwhile, in Iran, a despotic regime was actually trying to kidnap American journalists.

In the fall of 2019, Voice of America reporter Ali Javanmardi was on assignment in Iraqi Kurdistan when he received a call from a young female source who said she had information to give him about Iran’s military operations in the region. She asked him to meet at her hotel room in Erbil at 9 p.m.

The invitation was a ruse. The woman, Samira Moradpour, was later convicted by a Kurdistan regional court as part of an Iranian attempt to kidnap and extradite Javanmardi, a critic of the Iranian government. The plot was foiled when Javanmardi became suspicious and contacted Kurdish law enforcement and the U.S. consulate.

Javanmardi’s account, which he shared with the Washington Free Beacon, sheds new light on Iran’s efforts to silence its American critics. He is one of at least three U.S. journalists the Iranian regime attempted to abduct in 2019 and 2020, a former senior State Department official familiar with the threats told the Free Beacon. All three reporters work for Voice of America, a federally funded news agency.

In July, the Department of Justice indicted four Iranian operatives for surveilling and plotting to kidnap VOA reporter Masih Alinejad in New York, leading critics of the Iranian regime to call for a more forceful response from the Biden administration. — WashingtonFreeBeacon

The story continues to describe an aggressive attempt by the contact to meet face-to-face after refusal to communicate through a secure app. The journalist agreed to a location, but did not show up — instead reporting the incident to authorities.

An arrest was made, and a confession was later given in which involvement with an Iranian kidnapping plot was revealed.

We all remember the outrage over the death of Khashoggi … it was wall-to-wall press forever.

But that implicated the Saudis, and the press has no difficulty saying anything to upset the Saudis. Iran, for some reason, seems to be a different matter. And it has been for at least as long as we have had Ben Rhodes bragging about his ability to use the American press as an own echo chamber for his own political talking points.

For example, in response to US forces taking him out with a drone strike one NYT staffer tweeted a clip of Sulimani reciting poetry … 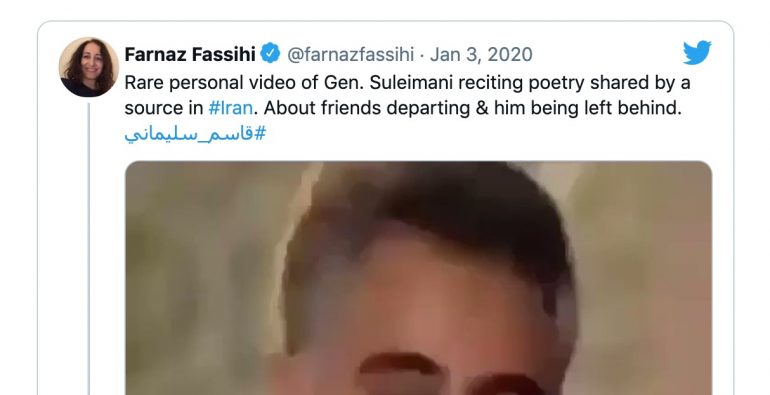 For a guy personally responsible for the death and dismemberment of thousands of Americans, and countless people from other countries, that’s a garbage take.

Once he got behind the (ir)Resolute Desk, Biden’s opening move with Iran was to relax some of Trump’s heavy sanctions with no strings attached. That notwithstanding, the Nuclear deal Biden covets so badly seems dead in the water.

And what, if anything, is he doing about the deliberate targeting of US journalists?

Not much. Not much at all.