The President of the United States just gaslit Americans while yelling at them.

This was not a good look for the President. He was agitated and angry as he spoke about the atrociously bungled withdrawal, chaotic evacuation, and a terror attack that left 13 U.S. troops and over 170 civilians dead.

Biden was originally scheduled to address the nation at 1:30 pm, which later got pushed back to 2:45 pm. He was late, beginning to speak at 3:30 pm. It was, as usual, a short address. The President spoke for approximately 25 minutes.

When he finally did speak to the nation in a bizarre midday Presidential Address (aren’t these things normally done in the evening during PrimeTime TV? That must be past Joe’s bedtime!) Biden spent half of the time yelling at Americans for not appreciating the great job he’s doing as President.

The President doesn’t seem to understand what is angering the American people — it wasn’t the leaving of Afghanistan, it was the how.

He tried to frame the withdrawal as an either/or — either we withdraw in the mess that Biden oversaw, or we bring in more troops. There were other options. One was not screw up the withdrawal, another was to leave a handful of troops as backup for the Afghan Security Forces, and other options that people with more expertise than I have could offer.

Biden came across as angry and defensive, lecturing, and insincere. It was a confusing speech that was all over the map and filled with strawmen arguments. The President was claiming victory while blaming Trump, suggesting that the “deal” with the Taliban was awful, then suggesting that the United States is not just considering accepting the Taliban as the legitimate governing power in Afghanistan, but might provide humanitarian aid. (WHAT?!) It also included an entire rewriting of Biden’s position on Afghanistan in the early part of the War on Terror. Biden was a big backer of “nation-buliding” until he decided it was an unpopular war and wanted out at any cost.

During his speech, Biden called the withdrawal an “extraordinary success” and clearly thinks that the bad press he’s facing isn’t fair.

Pres. Biden on U.S. troop withdrawal from Afghanistan: “The extraordinary success of this mission was due to the incredible skill, bravery, and selfless courage of the United States military and our diplomats and intelligence professionals.”https://t.co/Wfv8QKQBYU pic.twitter.com/CE4d6TSm6Y

He was angry and appeared to be yelling at Americans for not recognizing what a great job his handlers have told him that he’s doing.

It’s one thing to be angry and passionate about something (like @JesseKellyDC was on #Tucker last Thursday), but it’s another thing to be yelling like an old man at the clouds.

This, from Biden, was the latter. pic.twitter.com/usnrpTA5vJ

Biden, continuing with the hostile tone, blamed Americans for not leaving the country.

He said that they had been reaching out to Americans since March to leave…. but in April, Biden said a “Tollybon” takeover wouldn’t be inevitable and lauded the Afghan Security Forces. So, which is it? Were they confident that the country was relatively stable, or was it going to be the chaos we see now? Biden wants you to believe that they saw both scenarios and were prepared for both. That’s clearly not true.

Later in the speech, he calmed down a bit and said, “The war in Afghanistan is now over.”

President Joe Biden: “My fellow Americans, the war in Afghanistan is now over.” pic.twitter.com/jGQfHm67mH

He said that the reason to be in Afghanistan was over after the death of Osama bin Laden. He didn’t mention that he opposed the killing of bin Laden and was all for “nation-building” in Afghanistan.

Pres. Biden: “We succeeded in what we set out to do in Afghanistan over a decade ago. Then we stayed for another decade. It was time to end this war.” https://t.co/TQIuZzC8oG pic.twitter.com/uu2YDmXKTa

He contradicted what he said in April saying that chaos was inevitable.

Joe Biden contradicts his promise in April and now claims a chaotic exit was inevitable pic.twitter.com/l6ZrrDoLZm

After claiming that the mission was a success, Biden then blames Trump for anything bad that happened.

President Biden falsely claims that, along with the failure of the Afghan army, the collapse of Afghanistan was the fault of Donald Trump who wanted to let the Taliban run wild and people who disagree with him want a forever war with thousands of troops and untold bloodshed. pic.twitter.com/Et14gegx33

Biden also said that they would pressure the “Tollybon” because they might lose their good standing in the international community and risk receiving humanitarian aid.

AFGHANISTAN: President Biden maintains that diplomacy is the best way to secure the rights of women and girls in Afghanistan as the US ends their nearly 20 year war in the country. pic.twitter.com/8w7KsAZJRb

Hello, McFly! What about the “Caretaker President” that is still in Afghanistan?

Has the United States just abandoned him and accepted the Taliban as a legitimate government?!

He left without taking questions, as he turned to walk away, he turned back to retrieve his mask.

As reporters shout questions, Joe Biden turns back around. Not to answer them, but to grab his mask. pic.twitter.com/Sd0BGY31ZQ

Here is the full speech:

A full transcript can be found here. 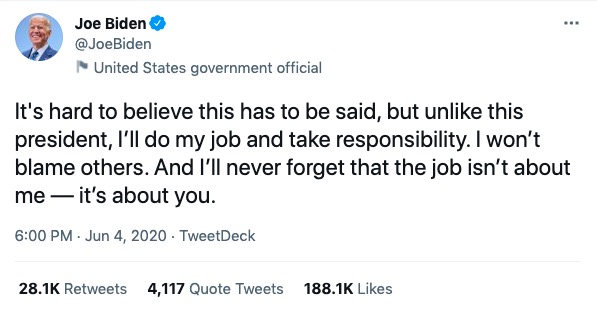 One of the particularly disgusting things is that Joe keeps bringing up his son Beau, who died in 2015 as though it’s relevant in any way, shape, or form. According to Gold Star families, Joe did this when he met with them trying to empathize with losing a child. It seems to me that losing a 46-year old son because of an aggressive brain tumor, while incredibly tragic, is not remotely similar to losing a 20-year old to a terror attack that the U.S. government was warned about but did not take precautions against because they put their trust in terrorists who have an 8th Century worldview and have no qualms killing people for no real reason.

Here’s the part where he brings up Beau.

BIDEN: “I don’t think enough people understand how much we have asked of the 1% of this country who put that uniform on, willing to put their lives on the line in defense of our nation. Maybe it’s because my deceased son beau served in Iraq for a full year” pic.twitter.com/74vhZMfbaG

After the presser, White House Press Secretary Jen Psaki was brought out to clean up after Angry Joe. She refused to address if Biden was repeatedly checking his watch during the dignified transfer of the 13 fallen U.S. troops which family members found callous.

NBC’s Chuck Todd slams Biden’s “extraordinary defensive” speech in which he “rais[ed] his voice” and “felt like he was doing political spade work” throughout much of “the first part” pic.twitter.com/tfufdqxbaz

Biden was getting slammed on Right-Wing Twitter in real-time and it was brutal!

Biden, aping Trump, says future missions need to have clear, achievable goals and that we must stay focused on the national interest. Biden also says he now opposes what he previously advocated for strenuously as senator and vice-president: nation-building Afghanistan.

Someone tell Biden it’s not that we left it’s How!!!!! #Confused

Why so angry if it’s such a success?

“In April, I made a decision to end this war.” —Joe Biden, 18 months after President Trump signed a deal to end the Afghan War

“Couldn’t this have been done in a more orderly manner? I respectfully disagree.” – @JoeBiden

Biden, April 14: “We will not conduct a hasty rush to the exit. We’ll do it — we’ll do it responsibly, deliberately, and safely … in full coordination with our allies and partners.”

“We must set missions with clear, achievable goals, not with ones we’ll never reach.”

So he’s saying evac was never a reachable goal?

.@JoeBiden is blaming Trump for negotiating with Taliban. Biden promised to negotiate with Taliban during the December Democrat debate in 2019: “The first thing I would do as [POTUS] is to make sure that we brought all combat troops home and into a negotiation with the Taliban.”

Wait. Biden just both claimed this was all a great success BUT blamed Trump anyway? ?

This operation was a complete success. Also this was all my predecessor’s fault.

President Biden just called for fighting “ISIS-K” with a foreign policy that “goes after terror where it is today, not where it was two decades ago.”

Two decades ago, terrorism was in Afghanistan. Today, it is in Khorasan—also known as “Afghanistan.”

Can’t think of a time when a President showed less ability to read a room than what we just saw from Biden.

After two weeks of horrible speeches, this was Biden’s worst.

Kurt Schlichter summed up the entire speech in one tweet:

Our intelligence community did a great job and also no one expected this but we all expected it and of course it happened and Trump made me and it’s the stranded people’s fault and Beau, so much Beau.

But why was the President so angry?

He knows it was a failure.

He’s yelling because he’s failed and he knows it.