Elections have consequences. But so do political narratives.

The gun is not the problem. The problem is one sub-category of gun owner… and any serious attempt at putting an end to what is broadly called ‘gun violence’ must begin by targeting the right problem.

This problem has been seriously compounded by another political narrative, one that paints police officers as a predatory menace looking for unsuspecting young black men to murder on sight. That ‘murdering black men’ narrative has been amplified beyond all context to the point that some in the general public believe hundreds or thousands of unarmed black men are gunned down by police, at a wildly disproportional rate to any other group. The motive behind such ‘extrajudicial killings’ is explicitly framed as white supremacy, systemic racism, and any number of similar buzzwords.

Criminals have a natural hostility to police in the first place.

Add to that a diet of media and politicians creating a public perception of an ongoing kill-or-be-killed dynamic with the police, and should we really be surprised if criminals are emboldened to murder cops?

Chicago doesn’t have a ‘gun’ problem. Lots of places have guns and relatively low crime stats. It has a murder problem. Thanks to the wonderful stats site ‘Hey Jackass‘ we can back that up with real numbers. Here’s one stat that hits you like a brick. They have plenty of others. 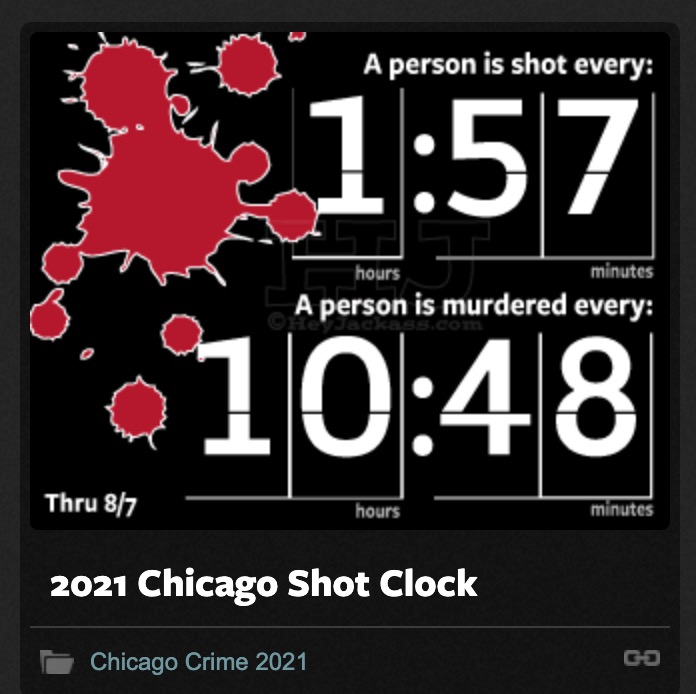 As if to prove that point, in 72 hours, a lot of mayhem was had in the Windy City.

At a Sunday news conference, Mayor Lori Lightfoot urged Chicagoans to end the acrimony between ardent police proponents who say officers are hampered by overly burdensome rules and staunch critics who say officers act with impunity.

‘Stop. Just stop,’ she said. ‘This constant strife is not what we need in this moment.’

‘The police are not our enemies,’ Lightfoot added at the news conference.

‘We must come together… We have a common enemy: It’s the guns and the gangs.’

The shooting of the officers occurred on another violent summer weekend in the nation’s third largest city, with at least 64 people shot, 10 fatally, by afternoon Sunday, ABC7 in Chicago reported. According to the Chicago Tribune, 47 of those shootings took place in the 24 hours between Saturday night.

Most of us don’t have to worry about some jackwagon emptying a gun on you while you’re just doing our jobs. But law enforcement does. And in Chicago, two cops did not get to clock out at the end of their shift.

At a ‘routine traffic stop’ (if there can really be such a thing anymore), one cop was shot dead, and another is in critical condition with three gunshot wounds. If he’s lucky enough to survive, the best he can hope for is ‘only’ having lost an eye.

The other officer shot in the head last night in West Englewood. 3 gun shot wounds. One exited eye (lost one eye), one in the shoulder, one lodged in the back of the head. He's hanging on. Say a prayer. pic.twitter.com/SkkphENTyI

Ella French was shot dead by someone in the car they stopped.

That 2-month-old child will never get to have any memory of his or her mother.

The Chicago Sun-Times expressed the same sentiment this way:

In an undated photo posted on Twitter, Chicago Police Officer Ella French is equipped with everything that should have protected her on Saturday night.

She is wearing a safety vest. She has a police radio attached to her uniform so she can call for backup. She has her gun strapped to her waist.

Officer French was shot and killed in the West Englewood neighborhood on the South Side about 9 p.m. on Saturday while making an apparently routine traffic stop. Another officer was shot, as well. He is fighting for his life, as we write this, in a hospital intensive care unit.

This city should be so ashamed of itself. —ChicagoSun-Times