Remember pastor Artur Pawlowski, who refused to kneel when the government told him he had no right to worship? He paid a visit to Portland. Portland’s semi-professional riot class mobilized the response you’d expect.

Whether we call them Antifa or by some other name, their tactics and goals are the same. They attack and intimidate anyone who doesn’t share their violent leftist ideology knowing that authorities won’t do a damned thing to stop it. So when this article says ‘Antifa’, that’s who we mean.

The same agitator movement that tried to burn down an occupied courthouse has gone on to attack Christians as they gathered to speak and pray peacefully in broad daylight, in a public park. All evidence indicates that such rights are no longer protected on the left coast.

Children from ages 2-10 had explosive devices thrown in their midst. Sound equipment was trashed and thrown into the river. Mace or some other spray was used against the crowd. They came armed with shields and helmets. Even the sandwiches and refreshments they brought were ‘liberated’ by the mob.

Meanwhile, police stood by and did nothing.

Not only did the masked cowards attack unarmed victims, but they congratulated themselves for their courage in supposedly ‘bashing the fash’.

Ironic, isn’t it, that they targeted a polish man who knows first-hand what totalitarianism looks like.

See for yourself what happened.

Here is the flyer for the event, featuring Polish Christian pastor @ArturPawlowski1 pic.twitter.com/kIENHvcOjY

Fantastic time with the real Christians and Patriots in Portland! Thank you all for coming and standing strong! Be blessed! pic.twitter.com/UCvDVPIh9b

Andy Ngo, as usual, was on top of the events.

A woman attendee of the family Christian prayer event at the waterfront in downtown Portland describes what happened when antifa attacked them. pic.twitter.com/OtbHVftDor

According to this antifa account, after assaulting the attendees of the Portland family Christian prayer event, they stole their food and water. pic.twitter.com/BJ9ocq5UEh

A leftist ‘Christian leader’ had the gall to actually try to justify the violence while slandering Artur Pawlowski. Maybe some clown who approves of any group responsible for throwing flashbangs at toddlers should give his so-called ‘religious calling’ a serious rethink. 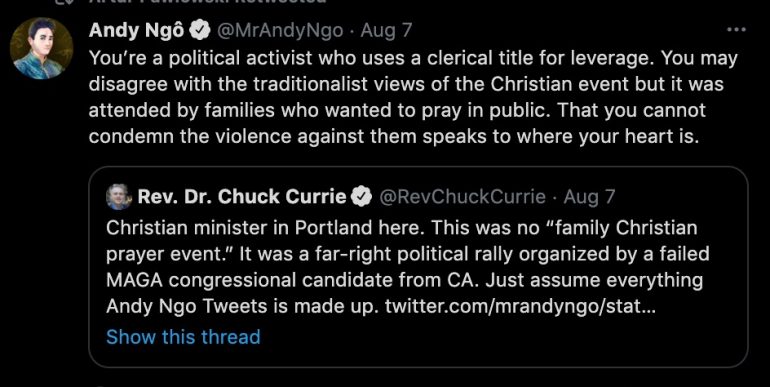 They came armed to a peaceful gathering.

They organized a group and targeted Christians.

They broke their property while mocking Christian faith, with lines like ‘where’s your God now’ or grabbing their sound equipment to taunt, ‘All cops are bastards in Jesus name, amen’.

If this were a mosque, or a Jewish temple the whole nation would be outraged. But we have been conditioned to accept some kinds of violence as acceptable.

Where’s the super-saint Joe Biden on this issue? He claims to be making America safe for democracy, right? Does that include the First Amendment or not?

Who’s the REAL ‘radical’ in this story … the masked cowards attacking unarmed people of faith with a long history of non-violence? Or Arthur Pawlowski standing up and making declarations about the gospel no matter who stands opposed to him saying it?