Normally, a conservative voice scoring an exclusive interview with someone like Donald J Trump would expect a bump of good press after the airing. Imagine Dan’s surprise when he faced accusations instead.

We’ve tracked Dan Bongino’s rise with interest. He worked hard to get where he is, and we are happy to have him fighting on our side in the cause.

Knowing his background as someone who regularly says things that YouTube will absolutely censor and demonetize — while literally daring them to censor it because that will prove his point about what kind of Communist goons they really are — it was a little puzzling to hear claims that Bongino had edited the Trump interview on the show he has Saturday nights called ‘Unfiltered’.

The entire Trump interview showed on the air without any cuts or edits. So why was one of Trump’s staffers ripping him on the internet about the interview being ‘edited’? Rather than contact him to figure what went wrong, Liz went directly to Twitter. It was a case of ‘ready, fire, aim’.

It went nuclear, of course.

The edit really happened, but only where it went up on the FoxNew’s YouTube channel. It was someone in FOX who bent the knee to the big tech overlords lest they face a strike for saying those forbidden words about the election.

She softened her tone once she got some more information, correcting the record. But by then it was already a story. You’ll notice the ‘memory hole’ tweet looks a little different than the one that was screen-capped, above. 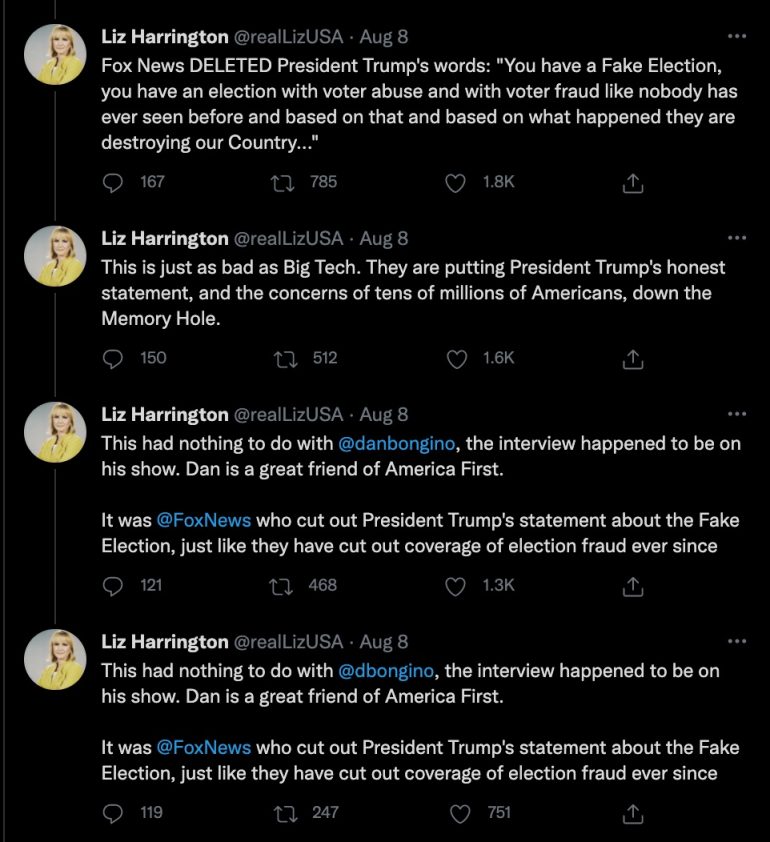 One of the reasons we respect Bongino is that he took ownership of the problem, and promises to find a solution. This fits with the track record of anyone who has followed him would expect.

Dan Bongino, in his own words.

“That is not acceptable to me.”

Some Fox staffer is going to have a very uncomfortable conversation about what went down, and what that means for the future.

On his podcast (which also has a YouTube version!) he played the part of the clip that Fox was unwilling to post online. You can see for yourself just after the open, here.

The interview (from which that small section about the election results had been redacted) is posted below:

If the left thinks they can dominate us, and make us fold like a cheap tent with simple threats, they will be happy to do so. It makes their fight so much easier to win.

Some of us would rather go down swinging against impossible odds.