While many in the United States and other Western allies watched in horror as Afghanistan fell back into control of the Taliban in record time, China saw an opportunity to bash America.

It has become pretty clear in the past 20 years that the war in Afghanistan was becoming a “forever war” and extracting U.S. troops while fending off the Taliban was going to be very difficult.

But no one expected the country to fall back into the hands of the Taliban quite so rapidly. The country has reverted to the Taliban two weeks before the official pull-out date of August 31, with major cities, including the capital of Kabul, captured in less than a week.

This isn’t just a loss for freedom and human rights in Afghanistan, it’s also a humiliating defeat for the United States.

After 20 years, a trillion dollars, and so much American blood that was spilled there, what is there to show for it?  It’s like the U.S. was never there.

And now, the Afghan people — especially women and girls — will suffer under the repressive Taliban regime.

It’s a huge victory for regimes critical of the United States.

Rivals of the United States also have expressed dismay. Among them is China, which fears that the ascent of an extremist Islamist government on its western border will foster unrest in the adjoining province of Xinjiang, where Beijing has waged sweeping crackdowns on the Uyghur population that have been denounced by the West.

Washington “bears an unavoidable responsibility for the current situation in Afghanistan,” Col. Wu Qian, a spokesman for China’s Ministry of National Defense, said earlier this month. “It cannot leave and shed the burden on regional countries.”

Just like with the coronavirus, they’re using a situation that could hurt the Chinese Communist Party and turning it into an opportunity to attack the United States and Western democracies in general.

Despite their concern over a likely extremist Islamic government as a neighbor, the CCP is using the fall of Afghanistan to push anti-American propaganda.

It’s now easy to categorize the United States as a “paper tiger” that has bailed on the Afghan people.

The state-run Chinese media organization Global Times is capitalizing on the opportunity. 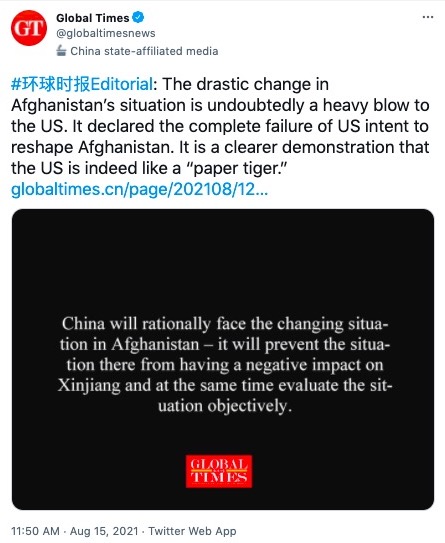 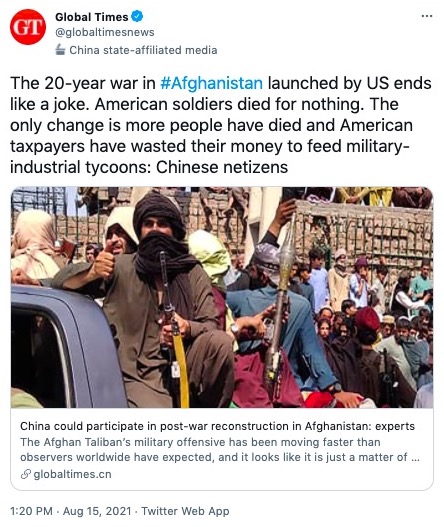 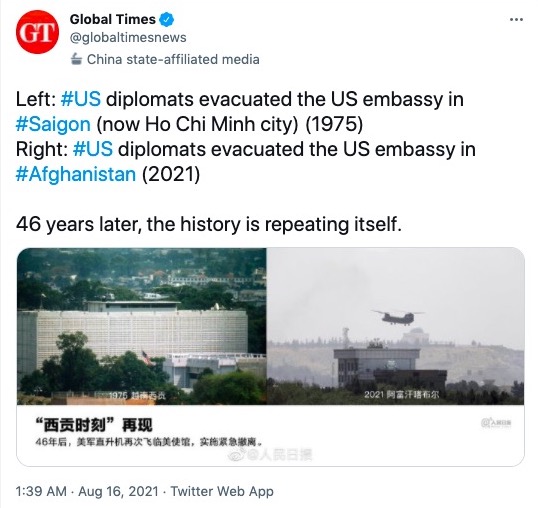 For China and Russia, there is opportunity as well as concern in the departure of U.S. troops. Both Moscow and Beijing have hosted Taliban delegations in recent weeks in an attempt to pave the way for a post-American future in the region.

The humiliating conclusion of the two-decade U.S. venture into Afghanistan will aid their efforts to persuade many governments to seek out relationships elsewhere, analysts say.

China can now position itself as a leader to help the Taliban build the Afghan economy. 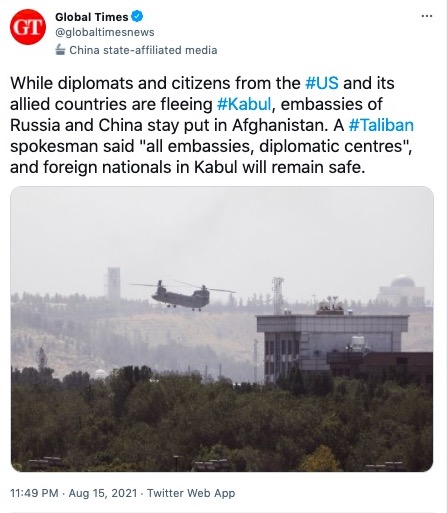 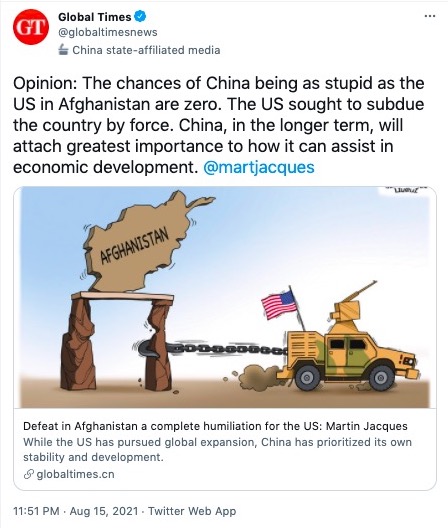 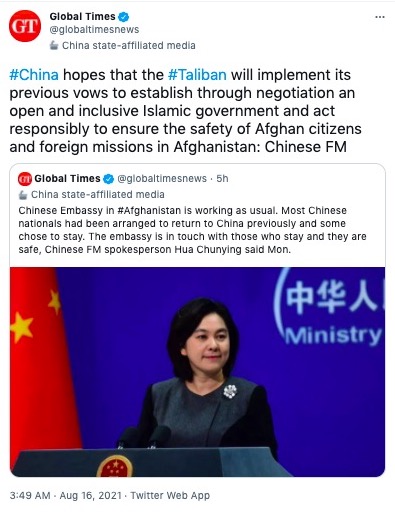 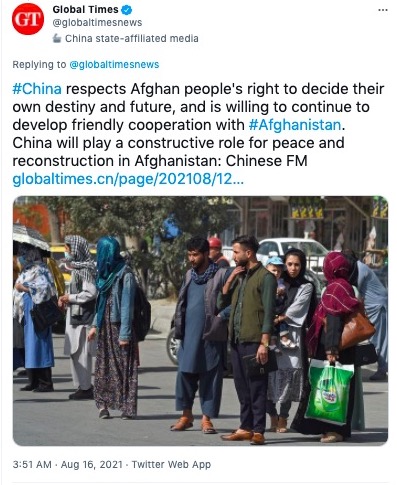 Chinese propaganda is to raising doubts on the United States as the “champion of liberty” and its commitment to promote democracy and freedom around the world. Especially in places like Hong Kong and Taiwan.

In a commentary directed at Hong Kong, China’s state-run Global Times cited Afghanistan in a signal to democracy activists not to heed repeated American promises to “stand by” Hong Kong. 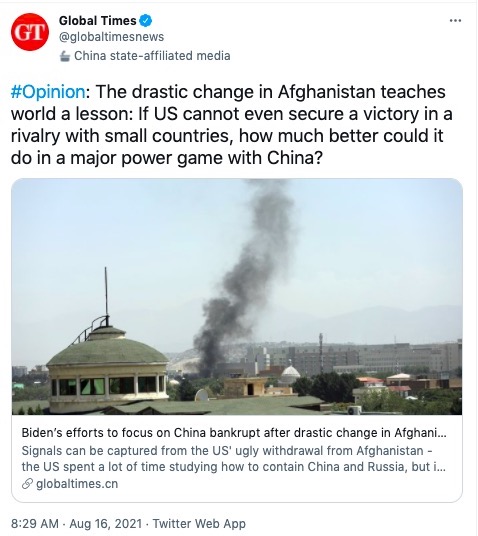 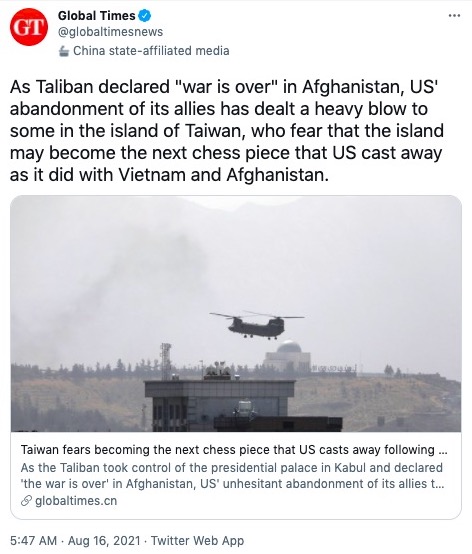 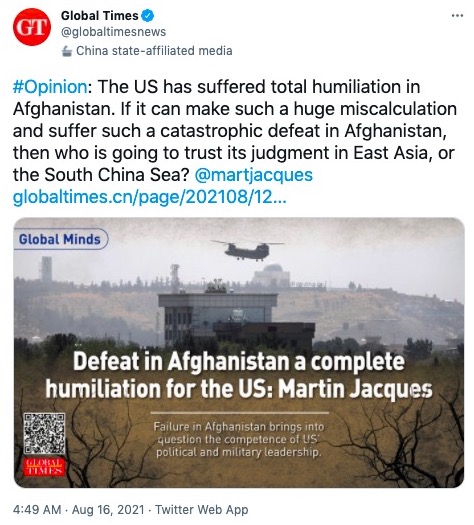 The Chinese government is already making it clear that they’re going to make a move to take Taiwan just like they did with Hong Kong. 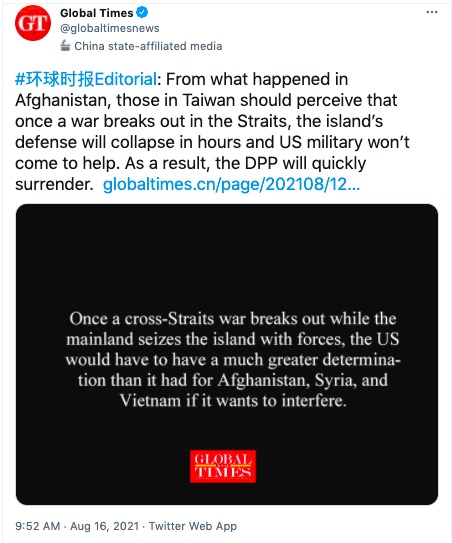 They’re not afraid of a U.S. military that is focused on “wokeness”, puts out cartoon recruitment ads, and is thirsty for social media clout.

Russia will also be making the most of this after a humiliating withdrawal from Afghanistan 30 years ago.

“It has been proven repeatedly that whomever U.S. politicians claim to stand with will face bad luck, plunge into social unrest and suffer severe consequences,” the commentary said.

Russia has been struck by the speed of the unraveling of the U.S.-installed government in Kabul, said Fyodor Lukyanov, the chairman of Russia’s Council on Foreign and Defense Policy and editor in chief of the magazine Russia in Global Affairs.

The decade-long Soviet occupation of Afghanistan, which ended in 1989, is widely remembered as a failure, one that leaves Russia in no mood to reengage too closely with Afghanistan, he said.

But at least, Lukyanov noted, the government left behind by the Soviets survived for three years after the withdrawal of Red Army forces.

“We believe our failure was big, but it seems the Americans achieved an even bigger failure,” he said.
Source: Washington Post

Both China and Russia are seeking to legitimize the Taliban.

China can now pour in cash and buy the Taliban’s favor, while Russia can use the “enemy of my enemy is my friend” tactic.

We’ve basically taken a country that was hostile to Russia (considering the decade-long occupation) and handed over an ally with a terror-friendly regime and thousands of Al Qaeda prisoners that they’ve just released.

It’s going to get very ugly.

But ultimately, this failure lands smack on Joe Biden whose administration didn’t see this coming and was constantly assuring the public that everything was going to be fine.

Now, he’s hiding away at Camp David on vacation.

Is this the way that a Commander-In-Chief is supposed to behave?