Mayor Muriel Bowser had quite an eventful weekend — she attended a big bash with Dave Chappelle, officiated a wedding, celebrated her birthday, and violated the mask mandate that took effect on Saturday. That’s all just fine with CNN.

After the Center for Disease Control (CDC) announced its flip-flop on mask-wearing for the vaccinated, Democrat D.C. Mayor Muriel Bowser announced new indoor mask mandates would be in effect for everyone age 2 and up, regardless of vaccination status, beginning at 5 am on July 31. 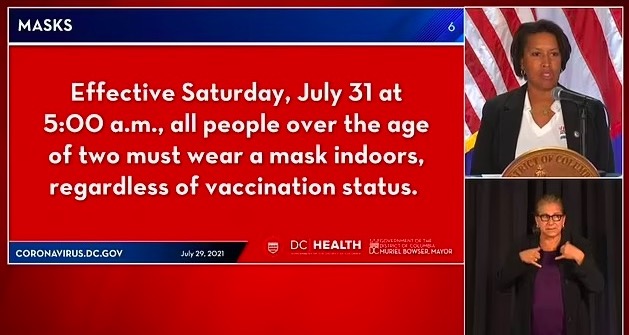 The mandate taking effect on Saturday at 5 am seems a bit weird, doesn’t it? Why not midnight?

Oh, well, that’s easy to explain. Mayor Bowser had a prior committment. You see, she had a big event to attend on Friday night — comedian Dave Chappelle was performing and she gave him a key to the city.

The Mayor’s office said that the event was outdoors, but it was still quite a maskless crowd with a DJ.

Muriel Bowser mask mandate started at 5AM this morning.

Then, on Saturday, after the mask mandate took effect, Mayor Bowser officiated a large wedding.

Later, she was spotted indoors without a mask on. The Washington Examiner has the exclusive photo. Again, there was pushback against the “Republicans pouncing” on the story saying that the photo was taken during the meal.

Here’s the thing about that…

This is blatant hypocrisy from someone who is “taking the virus seriously” and loves putting restrictions on other people. Meanwhile, she’s also trying to entice children with Visa gift cards and Apple AirPods to get an emergency-use authorized vaccine for an illness that they are at very low risk for and long-term studies have not yet been done. It’s madness.

And this isn’t just some random Democrat — she’s the mayor of the nation’s capital and there were some in the party pushing Biden to pick her as his running mate in 2020.

Look, Mayor Bowser received the vaccine in January, and presumably, most of the people at the Chappelle event and the wedding have also been vaccinated. She should be able to live her life normally without all these stupid mandates.

Besides, it’s pretty clear that masks and vaccines are not the “silver bullets” to end this pandemic — the virus was still spreading despite the high-rate of mask compliance and a reasonably high rate of vaccination. But we’re not allowed to say that.

The hosts over at CNN — just like Fauci and the CDC — have taken every position under the sun on this, and now, they’re actively running cover for Mayor Bowser because, well, you know, it’s hard to keep track of what’s what when the goalposts keep shifting.

“She wasn’t actually, as far as we know, violating the new rules, correct?”

“It seems like it could be during the toast. Right?” pic.twitter.com/wJA2OoN91O

“It’s all much ado about nothing,” say the absolute hacks.

These are people from the same network that called Justice Amy Coney Barrett’s appointment to the Supreme Court a “super spreader event” even though it was outdoors, and have been relatively mum on the Delta Variant Texas Dems shedding virus all over D.C. right up to the White House and Pelosi’s staff.

Now, they’re excusing Mayor Bowser because she “wasn’t actually” violating the new rules because it might have been during the toast, or she was eating, or something else that excuses her behavior.

The Partisan Presstitutes just can’t let any criticism of their Darling Democrats slide, even if it’s well-deserved criticism.

Do you think they’d be this charitable if it was say… Florida Governor Ron DeSantis violating his own mandate? Hell no! That would make headlines for weeks.

The worst part of this is that CNN pretends to be neutral when they are not. At least MSNBC admits that they’re leftist and open about their bias. CNN hides behind a non-existent shield of “objectivity” and “neutrality” when they’re actually overtly left-leaning and will run cover for any Democrat politician no matter the issue.