The U.S. Women’s National Soccer team’s dreams of Olympic gold are over after a stunning loss to Team Canada in the semi-finals.

The loss is a tough pill to swallow after the U.S. team lost their Olympic opener game against Sweden. But, at least the Swedish team had been a tough challenger in recent memory. Team Canada hasn’t beat the U.S. since 2001.

Canada will face the winner of the Sweden and Australia match for gold and Megan Rapinoe and her teammates will battle for the bronze.

It had been two decades since the United States lost a women’s soccer game to neighboring Canada and five years since the Americans dropped a major tournament, but all of that came to an end with a penalty kick late in the Olympic semifinal in Kashima, Japan on Monday.

After a scoreless first half, Canada went up 1-0 in the 74th minute on Jessie Fleming’s penalty against backup US goalkeeper Adrianna Franch, who had replaced injured Alyssa Naeher in the 20th minute.

A PK by the London, Ont. native puts Canada up 1-0 over the USA

It’s been a disappointing turnout for Team U.S.A. this Olympic run.

The penalty itself may be debated for some time, but Team USA’s performance in the 2020 Olympics can only be described as disappointing. The reigning World Cup champions and gold medal favorites began the tournament by snapping their 44-match winning streak with a 3-0 loss to rival Sweden in group play.

Later the US played underdog Australia to a 0-0 draw, but the team appeared to have turned the corner by beating the Netherlands in a penalty shootout in the quarterfinals.

‘Things just didn’t fall our way,’ US forward Alex Morgan said of the tournament, as quoted by The Wall Street Journal. ‘We didn’t play our best… I don’t know why.’
Source: Daily Mail

Let’s hope that it’s been a humbling experience for the cocky Team U.S.A. led by obnoxious captain Megan Rapinoe.

From the looks of things, that may be the case. 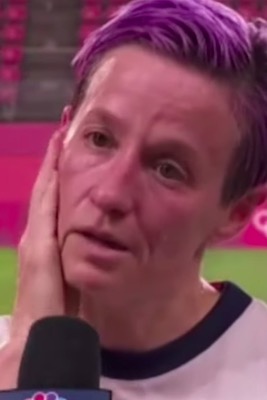 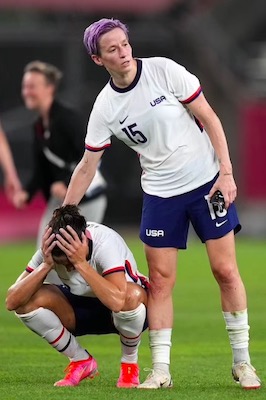 Good. They could use a dose of humility.

“We need to look at ourselves and need to perform better, period,” Rapinoe continued. “We don’t have the juice because the ball is banging off our shins, and we’re not finding open passes, not doing the simple things.”

Here’s teary Meghan Rapinoe talking about their loss to Canada.

Maybe if they’d taken their sport more seriously than their activism, they wouldn’t have lost to the country that thinks they have a monopoly on maple syrup.