In China, ‘social scoring’ means that if you fall out of favor with the Communist Party, you lose certain privileges as a citizen. That kind of thing could never happen here, could it?

General Flynn is one example in a long line of others showing exactly how it COULD happen here.

The specter of totalitarianism wouldn’t come to America in the same form that it took in certain other countries. Our checks and balances would kick in and go a long way to helping us resist them. But that doesn’t mean that it wouldn’t take on a new form to leverage our system against us.

The government cannot yet (legally) target and silence people whose politics run contrary to their agenda. (That doesn’t stop individual acts like Crossfire Hurricane, But the left has been busy using political influence to pressure corporations to be the indirect enforcement arm of their agenda.

If you thought it stopped at Trump, and a few others being kicked off of social media, you were mistaken.

Now we are seeing banks being weaponized against people espousing the ‘wrong’ politics. This can be particularly dangerous because only people with the ‘right’ politics will be able to conduct ordinary commerce. 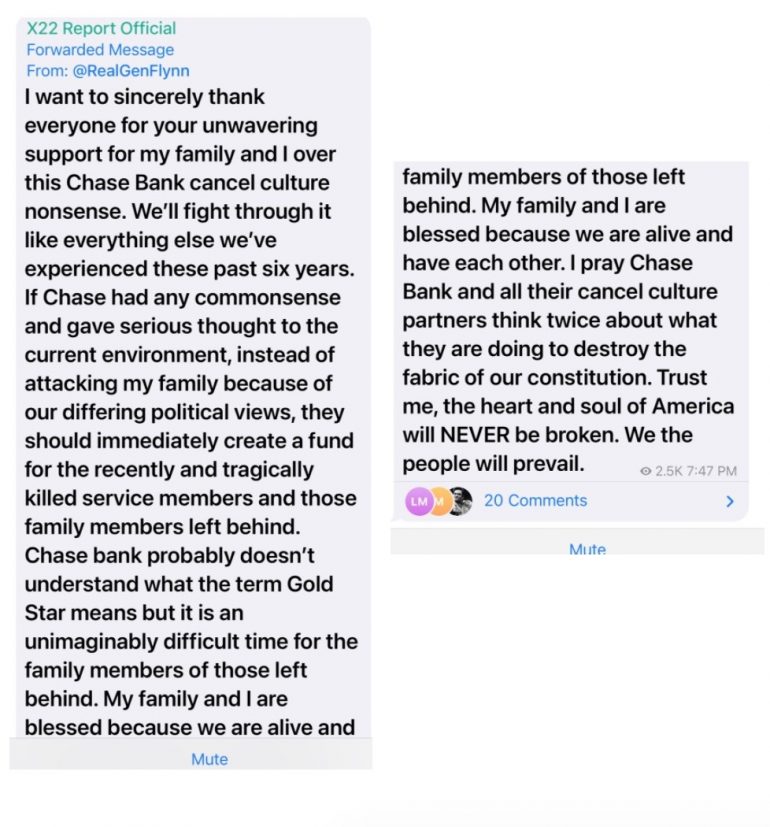 It doesn’t sound like the General has any intention of letting this slow him down, does it?

Johnathan Turley weighed in on the subject on his blog.

In the last few years, we have seen an increasing call for private censorship from Democratic politicians and liberal commentators.Faculty and editors are now actively supporting modern versions of book-burning with blacklists and bans for those with opposing political views. Columbia Journalism School Dean Steve Coll has denounced the “weaponization” of free speech, which appears to be the use of free speech by those on the right. So the dean of one of the premier journalism schools now supports censorship.Free speech advocates are facing a generational shift that is now being reflected in our law schools, where free speech principles were once a touchstone of the rule of law. As millions of students are taught that free speech is a threat and that “China is right” about censorship, these figures are shaping a new society in their own intolerant images.

The most chilling aspect of this story is how many on left applaud such censorship. A new poll shows roughly half of the public supporting not just corporate censorship but government censorship of anything deemed “misinformation.” Perhaps the same citizens and academics will embrace the Chinese model on social scoring and praise actions that the reported move by Chase bank. — JonathanTurley

As for ‘damage to your reputation’…? That’s a spicy take.

Does your bank refuse to do any business with Nike? What about any other companies that support the Communist Party of China, or that have been linked to the employment of slave labor? What about companies that funded individuals and political groups that called for acts of violence.

HOLY CRAP! 7 FAMOUS Brands That Use Kid SLAVES To Make Your Chocolate