President Joe Biden has turned his back on the people trapped in Afghanistan, our allies, the media, and the American people. Turning his back is becoming President Biden’s legacy.

After the 2020 election was called for him, Joe Biden immediately told world leaders that “America’s back” — indicating an end to what he called Trump’s “America Alone” policy.

He’s been beating that drum a lot to show that he’s not the same as the Bad Orange Man who was in office for four years.

During his #JointSession address, President Biden says he has made it clear to other world leaders that “America’s back.” pic.twitter.com/7kqPOLTROk

During a CNN Town Hall, Biden said that world leaders wanted reassurances that America was moving back to the pre-Trump era squishy globalism that has marked American foreign policy for both parties for decades. He then said that foreign leaders were worried that America wouldn’t be able to “get it together” and join in their weird, cultlike World Economic Forum globalism and chant the “build back better” mantra.

“‘We believe you, Joe. But will the country ever get it together.’” pic.twitter.com/4ayBkxvWHu

Lately, the back of Biden’s head is becoming more familiar than his face.

Question: “Do you know how many Americans are left in Afghanistan?”

Reporter: “How many Americans are left in Afghanistan, Mr. President?”

Biden said in November 2020 that he inherited a “divided country and a world in disarray.”

How’s he doing so far in remedying either of those problems?

We’ve got an immigration crisis at the Southern border, that has become a humanitarian crisis as people are crammed into facilities with the Wuhan virus spreading and then sent off to parts unknown into the interior of the United States without a court date. It’s a free ticket into the U.S.

The virus is still spreading despite the “experts” telling us that the vaccines will save us, so we’ve still got masks, distancing, and now a third shot of vaccine with endless boosters on the horizon. Places are instituting vaccine passports and dividing people into the “clean” and “unclean” categories despite reports that vaccinated people can spread the virus just as much as the unvaccinated.

America is more divided than ever along party lines, and increasingly on racial lines due to the push for neo-racism in the form of “Critical Race Theory” in education.

Parents are livid about CRT and that schools are mandating masks for children.

Because of Joe’s war on oil, we’re no longer energy independent, and gas prices are up, which means the cost of everything is up.

Inflation doesn’t look like it’s going to be as “temporary” as the Biden-Harris administration had assured us it would be.

And now, it looks like 20 years were spent battling back the Taliban in Afghanistan only to hand over the country along with billions of dollars in U.S. military equipment back to the Taliban in a week.

It’s not a good record.

No wonder his standard response has been to turn his back and walk away while refusing to answer tough questions.

On Tuesday, the President gave a 7-minute update on caving to the Taliban’s “red line” withdrawal date of August 31 which our G7 allies had pleaded to extend to ensure that they could get their citizens out of the country.

His comments on Afghanistan were scheduled for Noon but rescheduled until 4:30 pm. He was still late.

This brief update on America’s shiv to our G7 allies and kowtowing to terrorists was preceded by a 5-minute plug on Biden’s “Build Back Better” domestic agenda. He touted that his plan included long-term economic investment, low-cost housing, cheaper prescription drugs, affordable elder care, free pre-K, 2 years of free community college, and tax cuts for daycare and healthcare. It sounded like a Bernie speech more than a Biden one, especially when he started talking about corporations paying “their fair share.” He then spent a couple of minutes thanking Democrats in Congress for supporting his agenda, and pushed the GOP to pass the Democrats’ federalizing of elections act.

When he finally got around to addressing Afghanistan, he touted the U.S. evacuation effort trying to frame it as though it was a success, despite the clear scramble that this has become. Biden admitted that the remainder of the evacuation is dependant on the mercy and cooperation of the Taliban. 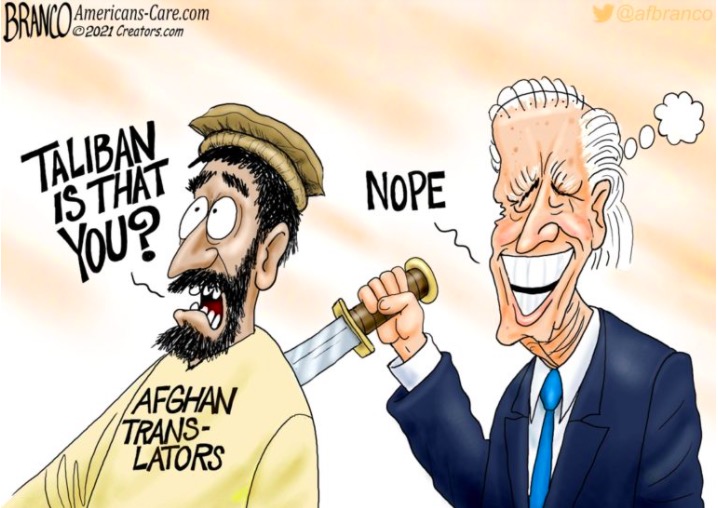 He then spoke about the terrorist group “ISIS-K” — reminiscent of the way that the Obama administration referred to ISIS as “ISIL” — and the threat the group poses to U.S. troops, civilians, and our allies the longer they stay in Afghanistan.

He also indicated that all of the G7 leaders agreed that a Taliban government could be legitimized on the world stage if they play nice with the evacuation. Shameful.

So, does this mean that if the Taliban executes the duly-elected Afghani PM, they’d be legitimately killing an “insurrectionist”?

Biden then thanked allies that he just coerced into acquiescing to the demands of the Taliban, because as it is with military conflict, the United States is the big player and our allies know it.

He then turned his back and walked away without taking a single question.

He’s been turning his back on reporters and everyone else since this entire bungled Afghanistan withdrawal began.

The man refused to end his vacation as people were falling from airplanes.

This is not a serious leader.