Yet, according to the “experts”, there is no evidence of SARS-CoV-2 originating from a lab, and especially not the lab in Wuhan where the virus was first detected and records have been deleted.

For months, we were told by “medical experts” like Saint Fauci that even a whiff of a suggestion that the virus had originated in a lab and leaked accidentally was a ridiculous conspiracy theory that was dangerous because it fomented anti-Asian sentiment, and the Bad Orange Man was always saying the “China virus”… because it came from China.

The World Health Organization couldn’t have the President of the United States saying bad things about their buddies (and deep-pocket puppeteers) in the Chinese Communist Party even though it was well-reported that the CCP was conducting so-called “gain of function” research to make viruses more transmissible and/or lethal. The novel coronavirus was renamed COVID-19 even though journalists had been referring to it as the Wuhan Virus for months because that was where the first outbreak was detected.

Fast forward to August 2021, and the Epoch Times has reported that a researcher at Stanford studied the samples of COVID patients and discovered traces of a “genetically modified” version of Henipah virus, a virus more lethal than Ebola.

The evidence was first found by Dr. Steven Quay, a Seattle-based physician-scientist and former faculty member at the Stanford University School of Medicine, who looked at early COVID-19 samples uploaded by scientists at the Wuhan Institute of Virology (WIV) shortly after China informed the World Health Organization about the SARS-CoV-2 outbreak.

The samples from the patients, who reportedly were found to have an “unidentified pneumonia disease” in December 2019, were uploaded to the genetic sequence database, GenBank, on the website of the U.S. National Institute of Health (NIH).

Quay says that while other scientists around the world were mostly interested in examining the genome of SARS-CoV-2 in the samples uploaded by the WIV scientists, he wanted to see what else was in the samples collected from the patients.

Collaborating with several other scientists, Quay said they were “fishing inside for weird things” and boy did they find that.

What they found, he says, are the results of what could likely be contamination from different experiments in the lab making their way into the samples, as well as evidence of Henipah virus.

“We found genetic manipulation of the Nipah virus, which is more lethal than Ebola.” Nipah is a type of Henipah virus.
Source: Epoch Times

The finding was confirmed by another qualified scientist at the request of the Epoch Times.

Nipah is a bat-borne virus that inspired the 2011 movie Contagion. Nipah is incredibly deadly and has a case fatality rate (CFR) between 40% to 75%. In contrast, the overall CFR of SARS-CoV-2 (so far…it’s rather complicated because the pandemic is still ongoing) is approximately 2%, though it appears that age, where you live in the world, and comorbidities such as obesity or underlying health conditions, all have an effect on the CFR of the SARS-CoV-2. For example, in the United States, the CFR for the virus is approximately 1.6%, but in Mexico, it is 7.7%, and we know that (despite what the Corporate Media fearmongers) children are at almost no risk for death while the elderly are at significantly higher risk. You can see that in the following chart from the Center for Evidence-Based Medicine: 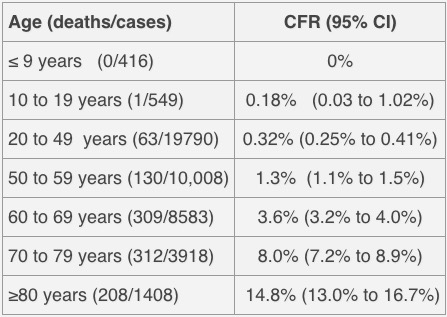 Medical experts are concerned that Nipah will be the next pandemic.

The so-called “fact-checkers” must be out in force trying to suppress this story.

As the Epoch Times notes, finding “genetically modified” Henipah virus in coronavirus patients in Wuhan could be signs of something very, very bad.

A sample of Henipah was shipped to the Wuhan Institute of Virology from Canada’s only P4-level lab in March 2019 by a Chinese national with ties to China’s People’s Liberation Army. As the Epoch Times asserts, it’s important to note that it’s unclear if this virus that was detected is related to that incident, but it is suspicious.

Back in early 2020, ClashDaily reported that two Chinese nationals working at the National Microbiology Lab (NML), Canada’s P4-level lab in Winnipeg, Manitoba, were escorted out of the lab and had their security clearances revoked on July 5, 2019. At the time, it was unclear at the time why that had happened, and it didn’t become a major story.

In the spring of 2020, however, things changed with the emergence of a global pandemic and the incident was getting greater scrutiny in Canada. Under the “routine” practice of sharing information, the two scientists sent virus samples without authorization to a place that was suddenly making the news — the Wuhan Institute of Virology.

The ClashDaily article did not say that the coronavirus was a result of the samples, but it did say that the high-security Canadian facility housed several deadly viruses as well as samples of a coronavirus that was causing illness in Saudi Arabia and other Middle East countries in 2013.

On threats of having our revenue pulled by Google Adsense ad hosting services, ClashDaily was forced to purge the article with no ability to appeal. Google Adsense pulled ads anyway.

Oh, look at that! ClashDaily might have been onto something, but we were punished for it by allegedly sharing “dangerous and derogatory information.”

Meanwhile, in Canada, the controversy surrounding the firing of the two scientists — a married couple with ties to the Chinese military and repeated visits to the Wuhan Institute of Virology — has become a massive scandal over the past 18 months.

It has gone all the way to Parliament with the conservative opposition demanding to know how two scientists with such close ties to the Chinese military were able to gain high-security clearance in Canada’s lab that houses some of the most infectious diseases in the world.

One of the scientists at the center of the controversy, Xiangguo Qiu, has won global accolades for her work on developing a treatment for Ebola. Qui and her husband, Keding Cheng, along with a group of students from China, were escorted out of the lab on July 5, 2019. The details of the incident remain shrouded in secrecy.

Qiu is a medical doctor from Tianjin, China, who came to Canada for graduate studies in 1996. She is still affiliated with the university there and has brought in many students over the years to help with her work.

Currently head of the Vaccine Development and Antiviral Therapies section in the Special Pathogens Program at the lab, Qiu’s primary field is immunology. Her research focuses on vaccine development, post-exposure therapeutics and rapid diagnostics of viruses like Ebola.

She is also an adjunct professor in the Department of Medical Microbiology at the University of Manitoba.

Colleagues were shocked and thought it must be some sort of mistake.

The Public Health Agency of Canada (PHAC) called the incident an “administrative matter”, but it was later reported that both the Royal Canadian Mounted Police (RCMP), and The Canadian Security and Intelligence Service (CSIS) — Canada’s version of the CIA — were involved.

In June 2021, the National Post reported that Qui was listed as a co-inventor on two Chinese government patents that were related to her work for the Canadian federal government, and had been under RCMP investigation for being listed on two other Chinese patents in recent years. It was finally being admitted that this could have been a case of espionage.

Prime Minister Trudeau called the Opposition’s demand for unredacted documents from the federal public health agency “anti-Asian racism” despite the fact that the motion was filed by a conservative member on the Foreign Affairs Committee, Michael Chong, whose father was born in Hong Kong. Pretty rich from a Prime Minister who won’t admit how many times he wore blackface.

The Public Health Agency of Canada has refused to hand over documents to Parliament and the head of PHAC was reprimanded by the Speaker of the House of Commons in June 2021.

The government is so committed to keeping the details secret, that the Liberal Trudeau government filed a lawsuit against the Liberal Speaker of the House and Parliament itself in order to keep documents related to the firing under wraps. The Trudeau government insists that the documents must remain secret because they could be “injurious to international relations or national defense or national security” if handed over to the House of Commons. This is total B.S. since any potentially sensitive material would be redacted by the Commons Law Clerk before being handed over to the Foreign Affairs Committee behind closed doors.

The Liberal government dropped the court case earlier this month, but that was as Prime Minister Justin Trudeau called for an election which dissolved the current session of Parliament and meant that all business — including the order to produce the documents relating to the firing of Qui and Cheng — were terminated.

Why should we care what happens in that strange northern place often referred to as “America’s hat”?

Simple, what happened at that P4 lab over the past few years may have global impacts. As we have all very clearly seen over the past hellish year and a half.

We know that China conducts “gain of function” research and they don’t seem to care about the consequences. They just keep doing it.

Maybe it’s time that the rest of the world stops helping them.