Knowing what awaits them under Taliban overlordship, many Afghanis are taking their chance to flee while they still have one. Some made it. Some didn’t.

Between the door-to-door summary executions, the treasure trove of government data showing exactly who has been cooperating with the Americans, the Taliban policy of forcibly taking girls as young as 12 to serve as their ‘wives’, and the enforcement of a particularly harsh form of Sharia law, there is a lot of motivation to head for the exits while they still can.

They are desperate enough that we’ve already shown you the stories about people who tried to hitch a ride in the aircraft wheel wells, only to plummet to their deaths when they lost their grip as the planes roared into the sky.

We now have some updates about the disorderly evacuation from Kabul. One C-17 cargo jet was crammed to the rafters with refugees looking to get out. And there are photos…

The first photos have emerged of US cargo jets packed with hundreds of terrified Afghan refugees after they rushed the ramps before military personnel could close them in a desperate bid to flee the Taliban.

The US has so far flown at least two C-17 cargo jets out of Kabul and more flights are expected later this week despite chaos on the ground on Monday which left eight people dead, including desperate stowaways who fell from the sky in harrowing scenes.

A photo obtained by Defense One shows one of those jets filled with 640 Afghans, sitting on the floor of the plane that is fitted to carry 150 soldiers comfortably, but can take 171,000lbs of cargo.

The refugees – including many women and young children – ran onto the plane’s half-open ramp before take-off and ‘the crew made the decision to go’, taking them with them, an unnamed defense official said.

If you ever wondered what 640 refugees packed into the belly of a military cargo plane would look like, here is your answer. 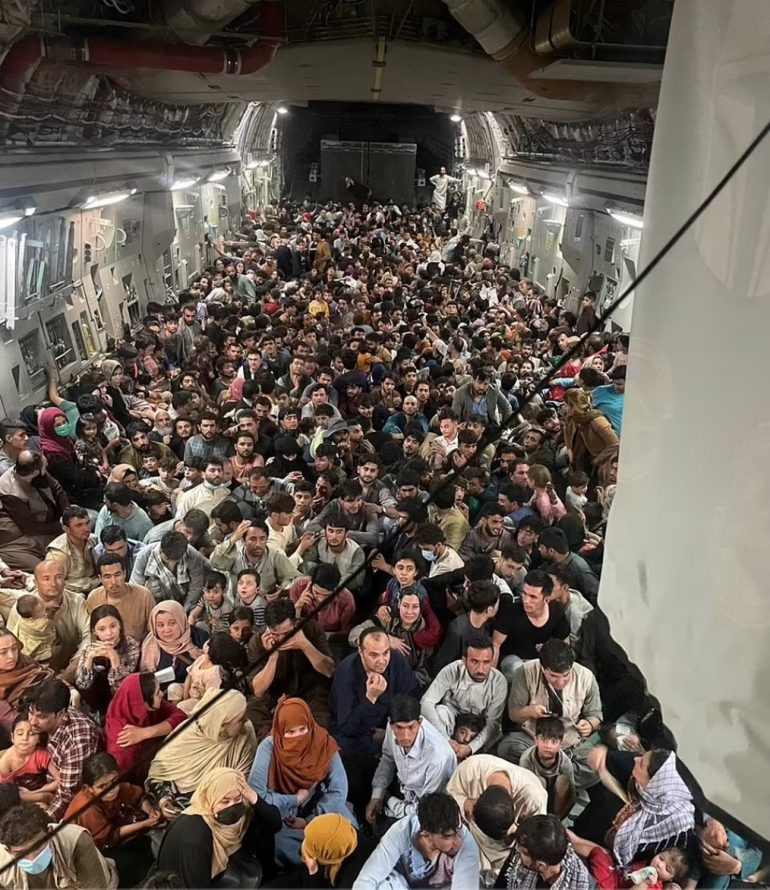 Some of us coming from small towns will look at a photo like that and realize that their entire high school didn’t even have that many people.

Not everyone fleeing from Kabul was so fortunate. Escaping the country is not necessarily the same thing as escaping to safety.

Anyone taking to the sky to cross the neighboring Uzbekistan border was treated as hostile. That had disastrous consequences for one plane, but the official story is a little murky.

Uzbekistan said it shot down an Afghan fighter plane and forced the landing of 22 military planes and 24 military helicopters carrying nearly 600 Afghan troops that ‘illegally’ crossed its border at the weekend when the Taliban took control of Afghanistan.

The 46 Afghan aircrafts carrying 585 troops were ‘forcibly landed’ at Termez aiport in southern Uzbekistan on Saturday and Sunday after they had fled the Taliban, the country’s state prosecutor said.

One of the Afghan military planes that crossed the border was shot down by Uzbekistan’s air defence system on Sunday after it illegally entered the country’s air space, the Uzbek defence ministry said.

…But the state prosecutor’s office contradicted this statement and said the aircraft had collided with an escorting Uzbek fighter jet causing both to crash in the southern province of Surkhondaryo.

‘The pilots of these aircraft landed by parachute,’ the statement said. The two pilots in the military plane were reportedly injured and placed in custody.

…The men were offered food and temporary accommodation in Uzbekistan, and the statement said Uzbekistan was negotiating with the ‘Afghan side’ over their return home. —DailyMail

With the inexplicable closure of the secure air base in Afghanistan coming before the rest of the country had been properly evacuated, decisions about national priorities had to be made by Biden’s administration in the mad dash for the exits.

True to form, putting the greatest possible distance between Biden’s policies and Trump’s, he will not be prioritizing the evacuation of US citizens.

In other words, ‘America First’ is not the evacuation plan.

“Once we get more airlift out of Kabul, we’re going to put as many people on those planes as we can,” Kirby said. “There will be a mix not just American citizens, but perhaps some Afghan SIV applicants as well. We’re going to focus on getting people out of the country, then sorting it out at the next stop.

“It’s not going to be just Americans first, then SIV applicants.” — NewsMax

That will come as welcome news to the Afghanis who helped us… so long as no Americans get stranded there in the process… because then we would have ourselves a hostage crisis to deal with.