The authorities “Down Under” are really relying on the stick rather than the carrot to change behavior, aren’t they?

Victoria’s Premier Daniel Andrews is determined that people are no longer allowed to have fun as the pandemic drags on.

Despite only recording 24 new cases bringing the total up to 227 cases of the Wuhan virus in a population of 6.68 million, Premier Andrews is cracking down on anything remotely enjoyable. You can see from the chart below that there were no deaths recorded according to data reported on Tuesday, August 17.

Approximately half of Victoria’s population lives in Melbourne.

Of the 24 locally-acquired cases, 21 are linked to known outbreaks and 14 have been in isolation throughout their infectious period. [2/2]

Premier Andrews is very, very upset that some Australians managed to party a bit over the weekend despite heavy-handed coronavirus restrictions. They purchased alcohol and consumed them outside near the restaurants and pubs that were not permitted to be open for indoor dining or drinking.

He can’t have that.

Having fun might lead to people being friendly and that’s frowned upon in Australia when you’re in the midst of a deadly pandemic.

COVIDictator DOWN UNDER: Defy Your Human Nature — Don’t Be ‘Friendly’ Or You Could Spread The ‘Rona (VIDEO)

So now, Aussies are no longer permitted to take off masks while drinking.

Yes. You heard that right.

No taking your mask off while drinking ? pic.twitter.com/UGSmKOx1jL

What are they supposed to do? Do they drink it through the mask? Premier Andrews isn’t exactly clear on that…

What he was clear about was that the virus spreading (not because it’s a virus) but because of rebellious people who disobey the edicts that their betters have put in place to keep the filthy hoi polloi safe from themselves and others.

He then bashed the naughty people who contracted an aerosolized respiratory virus because they were “not following the rules.”

It’s just disgusting the way that these COVIDictators have dehumanized people and treated them as vectors of disease.

It’s also shameful the way that they blame people for contracting an aerosolized respiratory virus.

Does he feel the same way about the flu? How about the common cold? Tuberculosis? What about RSV which is causing children to be hospitalized all over the world right now? Or is it just the ‘Rona that he feels this strongly about?

Australia has been taking the asinine, anti-science “Zero COVID” approach and trampling citizens’ freedoms to stop a virus with a better than 99% survivability rate.

In their crackdown on freedoms, they may have made China’s Xi Jinping blush.

Victoria is currently under its sixth lockdown which began almost two weeks ago over fears of the spread of The Delta Variant™.

Premier Andrews actually admitted that it might not be possible to maintain zero coronavirus cases without the words burning his tongue. Immediately after, he did say that he’s hopeful that they could reach “COVID Zero.” He insists that doing the same thing that they’ve been doing for the past 18 months is just the ticket, and it’s really going to work this time.

“There are no guarantees, I can’t predict where we will be with that certainty tomorrow, let alone in two weeks,” he said during the daily COVID-19 press conference.

“What I can be certain of is if we don’t follow the rules or get tested, if we pretend it is over because we desperately want it to be, then we will be locked down until 80% of us have been through the vaccination program.”

Mr Andrews stressed it was important to have all reported cases linked and no mystery infections before health officials would consider emerging from lockdown.
Source: Sky News Australia

These people are unbelievable.

They’re never going to let us go back to “normal”, are they?

For anyone who is unfortunate enough to have Daniel Andrews as your Premier, do you feel the need to comply but still be subversive? The Sippo MaSk just might be the option that you’re looking for. .. 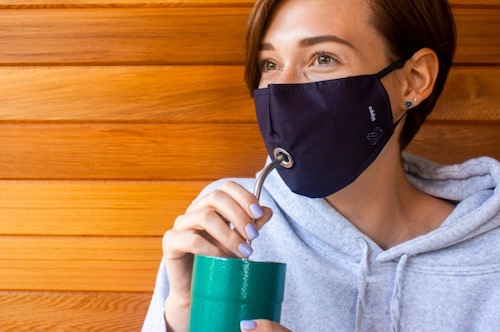