It doesn’t look very “scaled back” — but then, he’s Barack Obama and obviously more important than any other American.

While the Biden-Harris administration is threatening imposing federal mask mandates and more restrictions because of the spread of the “Delta variant” of the coronavirus, the powerful, rich, and famous can carry on their lives as normal because they’re apparently above the rules.

Former President Barack Obama held a big party on his $15 million 29-acre waterfront mansion in Martha’s Vineyard. It’s an interesting choice for someone who thinks that climate change will make the sea level rise, but whatever. Barry and Michelle are free to live where they want to, and we are free to call them out on their hypocrisy.

Speaking of hypocrisy, a small, outdoor Rose Garden event announcing Amy Coney Barrett as Trump’s pick was called a “super-spreader” event, but the media isn’t very critical of POTUS 44 bringing people from all over the country to a small island in Massachusetts just so celebrate his birthday.

When “Republicans pounced” once plans for the party with a guest list of 500 and a staff of 200 leaked while the CDC warned that the “Delta variant” posed a risk to vaccinated people, a statement was issued saying, “the [former] President and Mrs. Obama have decided to significantly scale back the event to include only family and close friends.”

“This outdoor event was planned months ago in accordance with all public health guidelines and with COVID safeguards in place,” Obama spokesperson Hannah Hankins said in a statement. “Due to the new spread of the delta variant over the past week, the President and Mrs. Obama have decided to significantly scale back the event to include only family and close friends.”

“President Obama is appreciative of others sending their birthday wishes from afar and looks forward to seeing people soon,” Hankins added.
Source: The Providence Journal

That was all bullcrap. Sure, maybe they disinvited a few people, and let some bow out gracefully over fears of The Delta Variant™, but it was still a pretty big bash with live performances, dancing, and specialty cocktail stations.

The Daily Mail posted a video of the “scaled back” party preparations.

Guests were forbidden from taking photos or video, but a handful didn’t follow the rules.

Singer H.E.R. – real name Gabriella Sarmiento Wilson, 24 – posted a photo to Instagram and Twitter of her with her manager Jeanine McClean and the Obamas.

The image, posted in the early hours of Sunday, was removed several hours later. 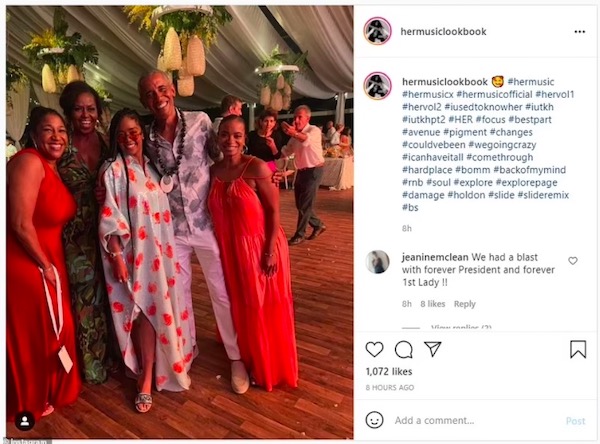 Singer-songwriter Erykah Badu managed to snag a video of Obama dancing while his back was turned.

Badu had been performing with her band and convinced Barry to join her onstage. While he was kicking up his heels, she captured the video and posted it to her Instagram page.

Obama can be seen wearing a light grey patterned shirt and white pants and some large black beads around his neck dancing up to the H.E.R. singer and then the two embrace.

Via https://t.co/QG9S7POklr, Obama and guests dancing maskless in the poorly ventilated tent. pic.twitter.com/LZG6wCs4T4

TJ Chapman and the DJ/musician he manages, Trap Beckham, posted a whole series of photos before they were deleted from social media.

While special commemorative “44 x 60” masks were handed out to guests, people didn’t seem to be wearing them. (Not that they’d do much to stop an airborne virus, and most of the people were likely vaccinated, so it’s really just pointless virtue signaling.)

Here is Chapman’s chronicle of his trip to Obama’s party. He includes the drive up to Obama’s home, the bomb-sniffing dogs, the backstage area, and the food provided, the luxury temporary toilets, and some clips of the party itself.

“Had to delete everything due to the rules,” wrote Chapman on Instagram. “It was epic for sure. If any videos surface it’s going viral. He danced the whole time. Nobody ever seen Obama like this before.”

What was interesting was who went and who was invited but didn’t attend.

Those who didn’t show were, Nancy Pelosi, David Axelrod, Larry David, David Letterman, Conan O’Brien, Ava DuVernay, and the big surprise on the no-show list was Oprah Winfrey, who played a massive role in making the Junior Senator from Illinois a household name in 2008.

But it wasn’t such a big deal that they didn’t make it to the big bash, there was a swanky pre-party cocktail party on Friday night where some of the disinvited were able to wish Barry birthday wishes and schmooze with the other “important people” in attendance.

On Friday night the Obamas were among a host of stars who enjoyed a pre-party cocktail gathering at Winnetu Oceanside Resort, where Obama was pictured chatting with guests as they took in sweeping ocean views from the deck.

The former commander-in-chief appeared in high spirits, smiling as he schmoozed with the crowd. He sported a more casual look with black dress pants and a dark button down shirt without a tie.

Despite the New York Times reporting that Oprah Winfrey had withdrawn from the party early amid concerns about Covid 19’s Delta variant the television host was reportedly at a pre party event at the island’s swanky resort on the bluffs on the edge of town.

Michelle and Barrack were reportedly present enjoying time with guests including Tom Hanks, George Clooney and Winfrey’s long-time partner Steadman Graham and friend Gayle King all of whom are on the island for tonight’s bash

Hunter Biden’s ex Kathleen and her daughter, Finnegan, are also staying at the resort and believed to be among the throng set to celebrate with Obama Saturday evening.
Source: Daily Mail

The number of stars that showed up on the weekend for Obama’s “scaled-down” party was unusual even for Martha’s Vineyard standards.

The Daily Mail reports that hoteliers were having difficulty finding taxis for their guests because “taxi companies are booked solid by those attending the Obama extravaganza.”

Since March of 2020, the “little people” have been told that it’s “dangerous” to hold family gatherings, celebrate weddings, hold funerals, or even go anywhere. Many governments intentionally made it difficult for people to travel. Churches were closed while weed and liquor stores remained open. Kids weren’t allowed to attend school in person, and teachers’ unions are raising questions on the “safety” of opening them normally in the fall.

And we’re right back on that treadmill again despite an excellent rate of vaccinations, immunity from natural infection, and a better understanding of treatment.

It looks like that “GymBro-strodamus” from Canada was right — he just forgot to mention how the rich and famous are exempt from all of the restrictions.