The interpreter is making a plea directly to the Commander-in-Chief, “Hello Mr. President: Save me and my family. Don’t forget me here.”

Mohammed has been hiding from the Taliban with his four children after “his yearslong attempt to get out of Afghanistan got tangled in the bureaucracy.”

He says that he is afraid and cannot leave his house for fear of reprisal from the Taliban.

The Taliban is now in possession of biometric data identifying Afghans who worked with the United States, and U.S. officials handed over lists of American citizens, Green Card holders, and SIV recipients to expedite the evacuation. Those may very well now be “kill lists.”

Mohammed’s appeal was made after the last U.S. evacuation flight had left Afghanistan.

An unknown number of Afghans, as well as American citizens, are in similar situations — they’re left stranded in Afghanistan.

But Mohammed has something that the others don’t have — a personal connection to the President of the United States.

Back in February 2008, then-Senator Joe Biden (D-DE) was on a fact-finding trip to Afghanistan with Senators John Kerry (D-MA) and Chuck Hagel (R-NE). At the time, Biden was the Chair of the Senate Foreign Relations Committee.

The Senators were traveling in two Black Hawk helicopters when a snowstorm made visibility difficult forcing them to land in a remote valley in Afghanistan.

As a private security team with the former firm Blackwater and U.S. Army soldiers monitored for any nearby Taliban fighters, the crew sent out an urgent call for help. At Bagram Air Field, Mohammed jumped in a Humvee with a Quick Reaction Force from the 82nd Airborne Division and drove hours into the nearby mountains to rescue them.

…Their Army helicopters’ emergency landing in a valley about 20 miles southeast of Bagram Air Field wasn’t in an area that was Taliban-controlled, but it wasn’t exactly friendly. The day before, the 82nd Airborne had killed nearly two dozen Taliban insurgents in a major fight about 10 miles away, said soldiers who fought there at the time.

While trying to stay warm in the helicopter, the three men joked about throwing snowballs at the Taliban, the senators said later.

“We were going to send Biden out to fight the Taliban with snowballs, but we didn’t have to do it,” Mr. Kerry said after they were rescued.

Instead, Mohammed joined the 82nd Airborne Division Humvees and three Blackwater SUVs as they barreled through thick snow to find the helicopters. The senators were sped back to the U.S. base with the convoy, said Matthew Springmeyer, who was leading the Blackwater security in the helicopters that day.
Source: Wall Street Journal

According to the WSJ, the defense contractor that Mohammed worked for lost the records he needed for his visa application. Because his paperwork wasn’t in order, he and his family couldn’t board the evacuation flights.

He’s now stranded as Joe Biden was in 2008. But with one distinct difference — the threat that Mohammed and his family face is much more imminent than what Biden has recounted in his telling of the 2008 helo story.

Biden has lied repeatedly on the 2008 campaign trail about the incident trying to make it sound like he was in life-threatening danger from the Taliban.

In a Baltimore speech last week, Biden said: “If you want to know where Al Qaeda lives, you want to know where (Usama) bin Laden is, come back to Afghanistan with me. Come back to the area where my helicopter was forced down with a three-star general and three senators at 10,500 feet in the middle of those mountains. I can tell you where they are.”

Two days later, in Cincinnati, he said Al Qaeda has re-established a safe haven and it’s not in Baghdad. “It’s in the mountains between Afghanistan and Pakistan,” he said, “where my helicopter was recently forced down.”

At a Sept. 9, fundraiser, Biden addressed his national security credentials by talking about “the superhighway of terror between Pakistan and Afghanistan where my helicopter was forced down. John McCain wants to know where bin Laden and the gates of Hell are? I can tell him where. That’s where Al Qaida is. That’s where bin Laden is.”
Source: Fox News (2008)

However, the 2008 Fox News fact-check states, “The area was reported as not being under Taliban control” but, as a precaution, the Senators were transported under guard and with air cover by an F-16 because, as Biden’s spokesman, David Wade noted, “it is the ‘Wild West’ out there.”

Meanwhile, as it’s pretty clear that the Biden-Harris administration has left American citizens and interpreters like Mohammed behind, Biden had repeatedly said that the United States of America doesn’t leave anyone behind.

He — let’s be real, his communications team — has been saying that America “doesn’t leave anyone behind” since 2018. 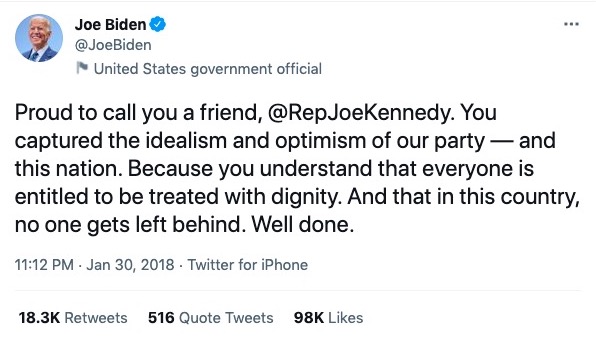 When he was campaigning, this was a convenient way to attack the Bad Orange Man. 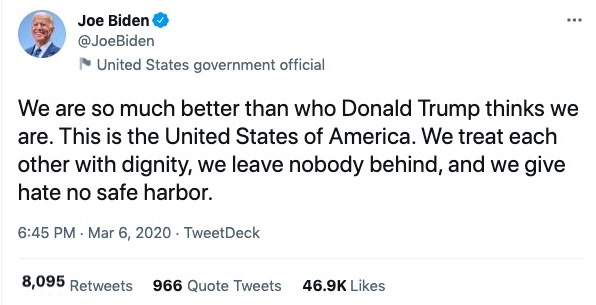 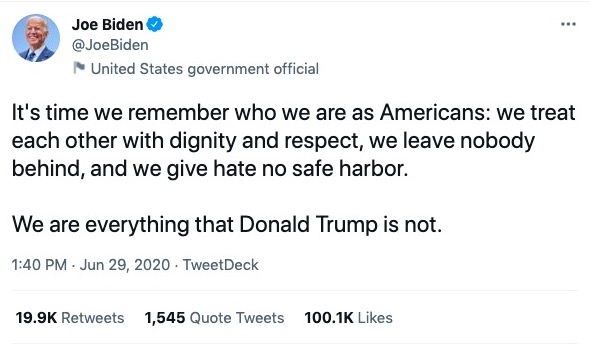 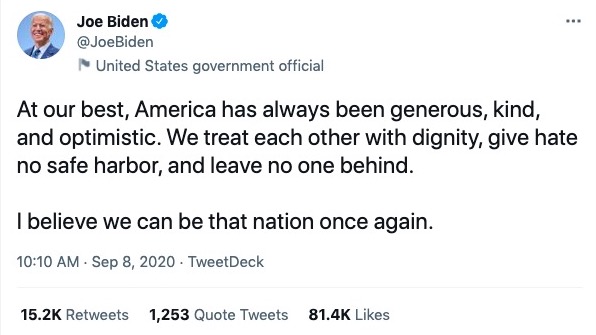 We cannot let President Trump define who we are as a nation. America is hopeful and inclusive — we give hate no safe harbor and leave no one behind. We are everything that Donald Trump is not. pic.twitter.com/98nSHN3hSJ

We are so much better than who Donald Trump thinks we are. This is the United States of America. We treat each other with dignity, we leave nobody behind, and we give hate no safe harbor.

In the United States of America, we leave nobody behind — no matter your race, gender, religion, sexual orientation, or disability. We need a president who understands that. pic.twitter.com/2a4Y74lX37

Joe Biden 2019 says that we “need a President” who understands that we leave nobody behind.

That’s true. We do need that.

In November 2020, when the right lost this “battle for the soul of the nation”, we lost a President that wouldn’t leave an American behind.

Maybe Joe will freshen up his logo if he decides to run in 2024 when he’s a thousand years old.

Here’s one that seems appropriate:

In Biden’s America, we do leave people behind.

Just ask Mohammed and the Americans who couldn’t get out of Afghanistan.