This is the first known show cancellation since Broadway theaters reopened earlier this month for the first time since March 2020.

After a year and a half of shutdown, Broadway was finally reopening. It wasn’t just good news for theater-goers, but for the thousands of employees in NYC that were unable to work because their entire industry was deemed “non-essential.”

The return of the performing arts to New York is huge and Disney, who have successfully transitioned some of their animated tales into spectacular on-stage spectacles, were thrilled to be back in business.

Opening night was a success as you can see from the curtain call.

Wish that you could’ve seen last night’s reopening night curtain call? Wish granted. Check out this clip of our amazing cast as they take the stage for the first time in eighteen months to bring this story back to Broadway. #BroadwayIsBack pic.twitter.com/ekbKtD8n9j

Just hours before curtains opened on Wednesday, Disney tweeted about the return of Aladdin and The Lion King to the Broadway stage.

The celebration was short-lived, however.

Just one day after reopening, the Aladdin show was canceled due to breakthrough cases of the Wuhan Virus.

A statement posted by “Aladdin the Musical” said that the show scheduled for Wednesday, September 29, was canceled and all tickets would be refunded. Future performances are up in the air and at the time of writing, a follow-up statement has not been issued.

No mention of how many individuals tested positive for SARS-CoV-2. 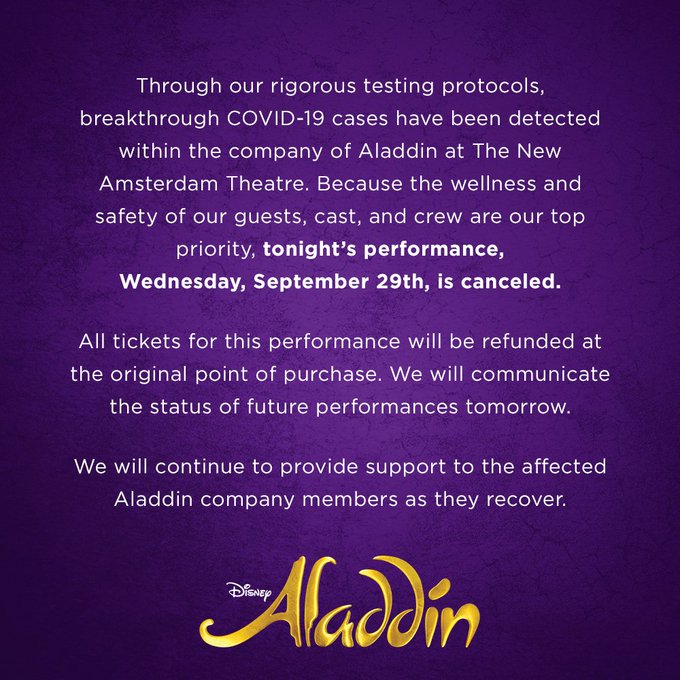 The rambunctious musical debuted on Broadway in 2014 but, like other shows, recently celebrated its return to Broadway after an 18-month hiatus because of the pandemic. It had only completed one performance after reopening on Tuesday before shutting down again due to the positive cases.

Theater critics had predicted that Broadway, and the rest of New York’s cultural life, was on the cusp of a vibrant rebound, but the Aladdin shutdown highlights the difficulties still faced by the entertainment industry as it seeks to rebuild momentum…

…Tickets for the canceled Aladdin performance would be refunded, Disney said, and the “status of future performances” would be updated on Thursday.

Nonetheless, most audience members will still need to wear a mask, be fully vaccinated or provide negative tests to attend performances of Aladdin until at least Jan. 2, the company said.
Source: Washington Post

Canceling a show due to breakthrough cases is a very big deal because Broadway is such a significant part of the Big Apple in terms of tourism, but also as an employer.

Broadway is big business for New York’s economy — an estimated 97,000 people are employed by shows. And when Covid-19 first swept across the US, it made New York City one of the first virus hotspots, forcing theaters to shutter for about 18 months.

This month, theaters began gradually reopening, raising their curtains with health measures in place to help protect against the spread of coronavirus.

All of New York’s 41 Broadway theaters require eligible audiences, crews, performers and other staff to be vaccinated against Covid-19, according to the Broadway League’s policy. Children under 12 and those unvaccinated due to health conditions or religious reasons must provide a negative Covid-19 test to be granted entry. Audience members are also required to be masked inside theaters.
Source: CW69 Atlanta

We keep being told that these breakthrough cases are “rare”… but how “rare” are they when we keep seeing them reported?

We’re told that vaccinated people don’t get seriously ill with COVID and some don’t even show symptoms. Is that the case here? We don’t know.

But they canceled the show… just to err on the side of caution.

They’re using a “rigorous” testing regimen on people who have already been vaccinated to an audience that must also be vaccinated and masked.

At what point do we say that these “precautions” to try to reach the unattainable goal of “COVID Zero” are just too much?

DC Insists Everything Will Be Fine As We Face Shortages Of Food & Other Items
October 18th, 2021 Sons of Liberty Media