Tech Tyrants and PC police have been one step behind the curve from the beginning, telling us we are supposed to believe the talking points and not the data.

Then, once the precise stories we were targeted, denounced, and suppressed for sharing become too big to deny… they are quietly accepted as fact.

Who pays the price in these cases? Not the people who told us not to believe those stories in the first place. They continue in their privileged place as ‘the experts who must not be questioned’.

Those of us who have asked for more information about taboo topics like known side effects, meaningful therapeutics, or certain vitamin deficiencies that, if corrected, make one less vulnerable to the more serious consequences of COVID? We pay. And do the people blindsided by side-effects they did not know existed.

Remember how loudly they squawked when people started asking questions about Myocarditis? Now, it’s accepted as a known side effect of the jab, especially in young males. But it took public outcry before they acknowledged it.

Of all the ‘taboo topics’ the most taboo (aside from mentioning any relevant medications for which there are no ridiculously lucrative drug patents) is any story even suggesting the possible lethality of the jab.

One grieving father learned this the hard way.

GoFundMe banned Ernest Ramirez for sharing “prohibited conduct” on the crowdfunding platform. His so-called unacceptable behavior was fundraising for his late son, Ernesto Jr., who died from the Pfizer vaccine on April 25.

The father used the page to explain how his only 16 year-old son was in good health, and regularly played baseball since he was 7 years-old. Advertising claimed the vaccine is safe for adolescents, and convinced him to book-in Ernesto Jr. for the jab on April 19. Five days later the teenager died from a dilated heart.

“My son received the vaccine and he died a few days later, and the only explanation that was given to me was an enlarged heart,” Ramirez said according to Life Site News. “I love the hell out of my country but I do not trust my government anymore.” –BL

Hat tip to Not the Bee for pointing their readers to a different crowdfunding website that has been set up for anyone wanting to support his efforts.

I was a single parent who lost my son a few days after he received the Pfizer vaccine.

The money raised will be used for myself and my good friend Robert Tooney of Bikers for Christ to travel to D.C.

I need to spread my story so that hopefully no one else will go through what I’m going through.

It kills me to come home to an empty house.

Ernesto Jr was my world and I feel I need to fight for him and others that are suffering. — LifeFunder

Imagine for a moment that media moguls were to hop on a Zoom call and agree that they were better off pivoting to a Fear of Big Pharma story from their current Fear of Covid one. What do you suppose would happen next?

It’s not like we haven’t seen this kind of a flip play out already. Since Joe took office, have you seen any of those pandemic body-count clocks on TV? Of course not. How many multiples of 9/11 have died from COVID during Joe’s presidency? PART TWO: Project Veritas Shows CNN Deliberately Manipulates Their Viewers (VIDEO)

We can predict with some confidence what sort of stories would be featuring in tomorrow’s news the minute they decided that Big Pharma was the approved ‘enemy’ in the narrative.

We’d immediately see stories about scary VAERS data like this: 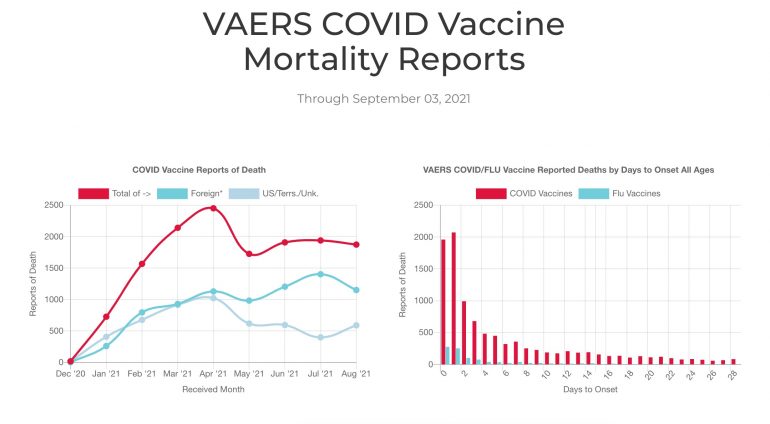 Depending on the intent of the person using these numbers in a report, they can be skewed some very different ways, as we all know from the ‘lies, damned lies and statistics’ adage.

Before we consider that, let’s make life easy for our fact-checkers, from the FAQ section of the same site:

Established in 1990, the Vaccine Adverse Event Reporting System (VAERS) is a national early warning system to detect possible safety problems in U.S.-licensed vaccines. VAERS is co-managed by the Centers for Disease Control and Prevention (CDC) and the U.S. Food and Drug Administration (FDA). VAERS accepts and analyzes reports of adverse events (possible side effects) after a person has received a vaccination. Anyone can report an adverse event to VAERS. Healthcare professionals are required to report certain adverse events and vaccine manufacturers are required to report all adverse events that come to their attention.

VAERS is a passive reporting system, meaning it relies on individuals to send in reports of their experiences to CDC and FDA. VAERS is not designed to determine if a vaccine caused a health problem, but is especially useful for detecting unusual or unexpected patterns of adverse event reporting that might indicate a possible safety problem with a vaccine. This way, VAERS can provide CDC and FDA with valuable information that additional work and evaluation is necessary to further assess a possible safety concern.

If someone saw these numbers wanting to write in support of Big Pharma, their narrative takeaway would be represented in the context of absolute deaths per 100,000, and they would go out of their way to impersonalize it, reducing it to merely statistical concepts. Sure that seems like a lot of deaths, but when you realize how many millions of doses went out, it’s not that many, really. Compared to the risk of how many people [sharkbite, lightning, car crash] we see just how small that risk…

If someone wanted to undermine Big Pharma, they would frame it in the absolute numbers of deaths, and they would personalize it, by telling the all-too-human consequences of this ONE incident and the tragedy of Ernesto Jr.’s story. (This is the same formula they used to generalize the George Floyd incident into an indictment of all police.)

They would look at the absolute number of 14,506 deaths on the chart above and present us with an emotionalized image of just how many 9/11s that represents.

It would look like what we have insisted on all along.

Give us an accurate understanding of both sides of the risk/reward equation for all of the demographics so that each individual can fully exercise his right and responsibility of informed consent before deciding on which course of action is in his own best interest.

That’s hardly a novel concept. We see exactly the same advice the CDC gives for anyone considering the Chickenpox vaccine…

Travis noted that the CDC’s guidance on COVID-19 is inconsistent with their vaccine recommendations for other contagious viruses. The current guidance for the Chickenpox, for example, does not encourage those who have contracted it to vaccinate themselves against the virus.

“CDC recommends two doses of chickenpox vaccine for children, adolescents, and adults who have never had chickenpox,” the official website reads. –FoxNews