For the record, we are not predicting any specific results, or that Durham’s investigation will land any of the ‘big fish’ involved in the Russian Collusion conspiracy. But even without that outcome, we have already seen some important reveals.

As we mentioned in a previous article, we’ve finally seen a formal indictment of one of the players in the Russian Collusion set-up. And yes, we can actually call it a set-up. That was the whole point of the false statement indictment.

Dropping a simple process crime on some lawyer’s head may seem like small potatoes, and like we’re being set up for yet another slap on the wrist. That’s sort of dirty trick is something we wouldn’t put past Team Biden. But some folks who know the law have had some time to chew over the particulars, and they have dug up some interesting reasons for (cautious) optimism.

A “false statement” charge does not require a litany of factual allegations regarding the conduct and statements of the defendant and numerous third parties over the course of weeks or months leading up to the making of the false statement. In over 30 years of practice as both a federal prosecutor and a defense attorney specializing in federal cases, I’ve never before seen anything remotely resembling the Sussmann indictment in a single count “false statement” case.

John Durham is far too serious of a career prosecutor, with a very long and established record of meticulous investigation and preparation, to have rolled out an indictment in this fashion if he was intending to wrap up the remainder of his work with a report to the Attorney General. —ShipwreckedCrew

It only takes a single paragraph to set out a bare-bones allegation. But Durham rolled out something like 44 pages. What’s he up to?

What about Clinton’s Attorney-Client Privilege?

This is gonna be a bitter pill for the leftists who crowed over dubious breaches of Trump’s personal information. Clinton’s own attorney-client privilege was overruled.

But on what grounds? It wasn’t Perkins Coie’s privilege to waive. It was Clinton’s.

The indictment alleges that the DNC, the Clinton Campaign, and Tech Executive-1 were all clients of the Perkins Coie firm for whom Sussman and others did legal work. To one degree or another, the Attorney-Client and Attorney Work-Product privileges would have applied to many/most of the records that Durham references in the indictment. The “privilege” belongs to the clients. Waiving privilege in order to show cooperation with Durham was not something that Perkins Coie could do on its own — the clients had the legal right to assert the privilege and attempt to keep the records out of Durham’s hands. — ShipwreckedCrew

One way this could have fallen into Durham’s hands would be if a judge had been convinced that the client were engaged in a criminal act. Such a situation would negate privilege. Is that what happened with the Clinton Campaign? If so, that would obviously be a big deal.

… But the most likely justification for ordering production of the records to Durham was the “crime-fraud” exception to the Attorney-Client privilege.

Noteworthy is the fact that the exception only applies, and records or communications are not protected by the privilege, if the CLIENT is engaged in planning future crimes or frauds, or is seeking legal assistance in ongoing crimes or frauds.ShipwreckedCrew

What about the ‘bag of tricks’ referenced in the indictment?

“You do realize that we will have to expose every trick we have in our bag.”

The problem was that both the Steele dossier and the Alfa Bank allegations fell apart soon after being fed to the FBI. A key source for dossier compiler and former British spy Christopher Steele was viewed by American intelligence as a Russian agent, and it was believed that the Clinton campaign and the dossier were being used by Russian intelligence to spread disinformation.

According to Durham, the Alfa Bank allegation fell apart even before Sussmann delivered it to the FBI. The indictment details how an unnamed “tech executive” allegedly used his authority at multiple internet companies to help develop the ridiculous claim. (The executive reportedly later claimed that he was promised a top cyber security job in the Clinton administration). Notably, there were many who expressed misgivings not only within the companies working on the secret project but also among unnamed “university researchers” who repeatedly said the argument was bogus.

The researchers were told they should not be looking for proof but just enough to “give the base of a very useful narrative.” The researchers argued, according to the indictment, that anyone familiar with analyzing internet traffic “would poke several holes” in that narrative, noting that what they saw likely “was not a secret communications channel with Russian Bank-1, but ‘a red herring,’” according to the indictment. “Researcher-1” repeated these doubts, the indictment says, and asked, “How do we plan to defend against the criticism that this is not spoofed traffic we are observing? There is no answer to that. Let’s assume again that they are not smart enough to refute our ‘best case scenario.’ You do realize that we will have to expose every trick we have in our bag to even make a very weak association.”

“Researcher-1” allegedly further warned, “We cannot technically make any claims that would fly public scrutiny. The only thing that drives us at this point is that we just do not like [Trump]. This will not fly in eyes of public scrutiny. Folks, I am afraid we have tunnel vision. Time to regroup?” —JohnathanTurley

Don’t assume we have reached the end of the road, yet either.

The Sussmann indictment doesn’t mean Durham is finished. There is still Durham’s focus “on the activities of the Crossfire Hurricane investigation within the FBI.” This would include Durham’s review of the FBI’s disclosures (more accurately, “lies”) to the FISA court in support the Carter Page warrants. Just imagine the internal discussions of the FBI personnel who prepared the FISA warrants with false information or information that had “no supporting documentation.” This chart from Inspector General Michael Horowitz from his 2019 report shows just how pervasive the lies were: 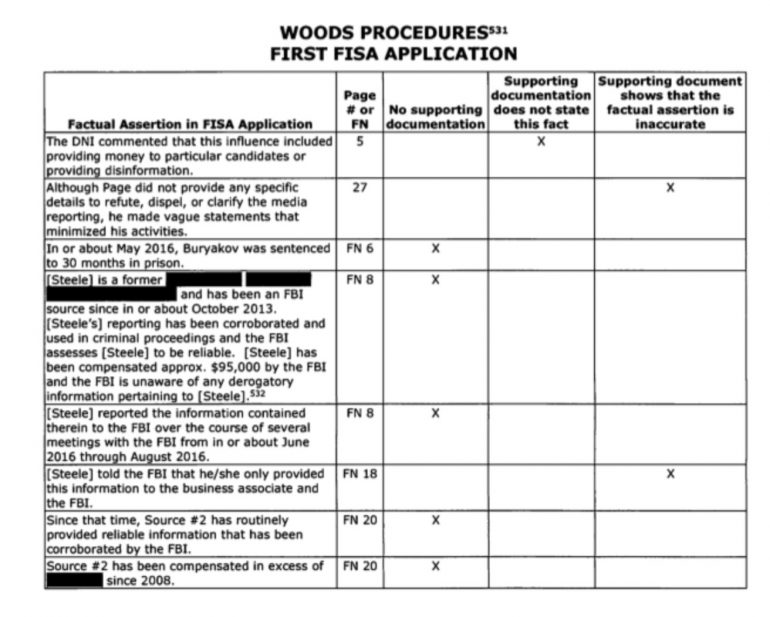 With that in mind, recall this report from The Wall Street Journal on August 13, 2021, which states Durham was:

“Presenting evidence to a grand jury and preparing a lengthy report expected to be completed in the coming months, according to people familiar with the matter.”

“Examining potential criminal charges against several lower-level FBI employees, and people who aren’t in government, according to people familiar with the matter.”

This doesn’t even come close to exhausting the questions raised by the indictment. But it does give some perspective to those of us cynically wondering whether this will be anything more than another ‘open-and-shut’ case in which the guilty walk without consequences, while the innocent are driven into bankruptcy through malicious prosecution.

Some of these facts are now out in the open where sweeping them under the rug will be much harder to do.

If it turns out that Durham actually has been quietly plugging away, rooting out people who were abusing their power, and building a case against them? It will have been well worth the wait, however infuriating that wait might have been.