Democrats spent the last few years banging their pots and pans about the imminent dangers of Russia. And even Obama recognized China as a threat back in 2012. But Dems? They’re busy pushing policies to make them both stronger. Not just the Nordstream 2 project either.

Whether that was his trade isolation of North Korea, tariffs on Mexico and China, the use of sanctions rather than military strikes to hit back at Iran, and the targeted sanctions of oligarchs and corporations on whose wealth foreign powers relied, Trump knew the power of the American dollar, and he wasn’t afraid to leverage it in our country’s interests.

The globalists have noticed how effective and coercive a tool that the American dollar can be as the standard currency of international trade, and how it has helped insulate America from financial shocks.

America has (for now) been stubbornly resisting the invitation to commit financial suicide in the way that some other Western nations already have. Even those times our country has plunged the knife into itself have not yet resulted in a fatal blow. But that doesn’t stop our politicians from trying again.

The Democrats have been salivating over the idea of passing yet another budget in the billions without a single Republican vote. This is on top of our red-line pandemic spending, and a couple of bail-outs.

We are now looking at WWII debt load, without the corresponding post-WWII growth. Our foreign rivals are noticing that trend.

If we are not careful, it will shake confidence in the US dollar. Much of our economy is energized by the perception that our dollar is a safe harbor in which it can grow and be kept safe from negative economic outcomes — like inflationary pressures.

A Russian oil company has started settling some aviation fuel payments in the yuan in China as Moscow and Beijing look to cut reliance on the US dollar and increase cooperation in the energy sector.
Alexander Dyukov, chief executive of Gazprom Neft, the oil arm of Russian gas giant Gazprom, said on Friday that the company had started using the yuan in China for aviation fuel settlements.

…Yang Jin, a Russian affairs specialist at the Chinese Academy of Social Sciences, said the two countries were on a de-dollarisation drive to counter US sanctions pressure, and to have their own currencies play a bigger international role.
“It can expand the international influence of the yuan and the rouble … and help resist the external risks of sanctions,” Yang said. –SouthChinaMorningPost

If Democrats push ahead with policies that will untimately devalue the dollar, they are giving our rivals far more than they ever accused Trump of having done to help them.

If they were anything other than devoutly partisan, Time Magazine covers during the Biden administration would already be looking like the ones they tried to smear Trump with. 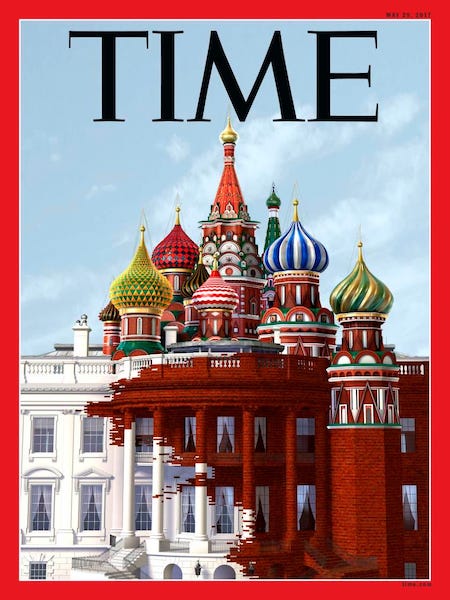 But this time, there would be some justification for it.

With ‘friends’ like Pelosi and Biden, America needs no enemies.