If all you knew about vaccine reluctance was what you saw on CNN, you are missing the bigger picture.

The story they tell is about MAGA-hat wearing rubes with conspiracy theories and irrational fears. There are stories they do NOT like to tell because they will shatter the illusions they build in their narratives.

They don’t talk about the reluctance found among Ph.D.’s for instance.

People with a Ph.D. are the most hesitant when it comes to getting the Covid-19 vaccine, according to a paper by researchers from Carnegie Mellon University and the University of Pittsburgh. —MSN

Or the graphs such studies have produced. 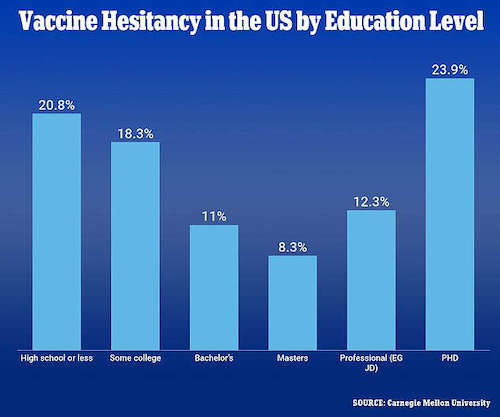 Because that would raise some uncomfortable questions.

They also don’t talk about the significant numbers of people from minorities still skeptical of getting the vaccine. But with the rise of stricter enforcement of mandates, that issue will become increasingly difficult to sweep under the rug.

The issue is coming to a head with confrontations like this one:

Carmine’s on the UWS says a hostess was assaulted after asking a group for proof of Covid vaccine to eat inside. “It’s a shocking and tragic situation when one of our valued employees is assaulted for doing their job – as required by city policies…” @NBCNewYork after football. pic.twitter.com/xrqZoNm74R

As is so often the case, allegations are being flung around. The customers are claiming they were mistreated and subject to racial epithets in a ‘mutual’ fight. The restaurant claims the staff member was attacked without provocation because they were abiding by the rules of the vaccine mandate.

Carmine’s, which has two locations in New York City as well as outposts in spots including Las Vegas, is known for large servings of pasta and other Italian dishes.

The restaurant has been following the city’s rule requiring proof of vaccination for indoor restaurant dining, which has been in effect since August 17 but is only just being enforced as of this week.

Bank, the CEO of the restaurant group of which Carmine’s is a part, said the host who was assaulted had offered the women a seat outdoors after they did not produce satisfactory proof of vaccination.

‘We follow the laws,’ Bank said at a news conference outside the restaurant. ‘I respect the vaccine mandate. We have an option, if you´re not vaccinated, sit outside.’

He said Thursday’s altercation started with a verbal dispute and escalated quickly.

BLM doesn’t really care about the nuanced particulars about who is right and who is in the wrong. They likely made up their minds on that detail from the second they found out the skin color of the parties involved. They care about leveraging this event to push their own agenda.

And that’s exactly what they’re about to do.

Black Lives Matter protest is reportedly set to take place on Monday outside the Italian restaurant Carmine’s in New York City, where a physical dispute erupted on Thursday over COVID vaccination proof cards.

Hawk Newsome, co-founder and chairman of BLM Greater New York, told The New York Times on Saturday that the group will protest against the treatment of Black patrons. The plan to protest comes after new details reportedly reveal that the restaurant hostess said a racial slur to a group of five Black women trying to enter.

This is about to put today’s crop of woke politicians from the mayors right up to that guy behind the irresolute desk in a tight spot.

Who do you take sides with when two of your important allies disagree with each other?

Do they side with BLM, who calls vaccine mandates a way to ‘enforce their racist beliefs and [exclude] black patrons?’ Or do they side with Fauci, Big Pharma, the teachers’ unions and everyone else who has been demanding a needle (or two or three) in everybody’s arm … or else?

Don Lemon wanted to ‘shame’ those resisting the vaccine mandate.

Well, Don. Here’s your chance. Denounce this BLM guy. If you’ve got the cojones. But you don’t. You only hit targets your corporate media overlords have given a green light to attack.

The activist monster the partisan press spent 2020 helping to create is veering off-script. The media and the politicians are going to have tough choices to make between racial pandering and overt tyranny.

The White House should be asked to go on record with their reaction to whether they agree with BLM’s claims that vaccine mandates are racist.