The Taliban had been handed billions of dollars of U.S. military equipment courtesy of the Biden-Harris administration, but their new sea-bearing vessels don’t appear to be of the same standard as the U.S. Navy.

Immediately after taking control of Kabul, photos and videos were shared on social media of the air and ground military equipment left for the Taliban, but no photos emerged of anything that was sea-worthy. It’s not so surprising since Afghanistan is a land-locked country bordered by Pakistan, Iran, Turkmenistan, Uzbekistan, China, and Kashmir.

But new photos have emerged of several members of the Taliban on the water. 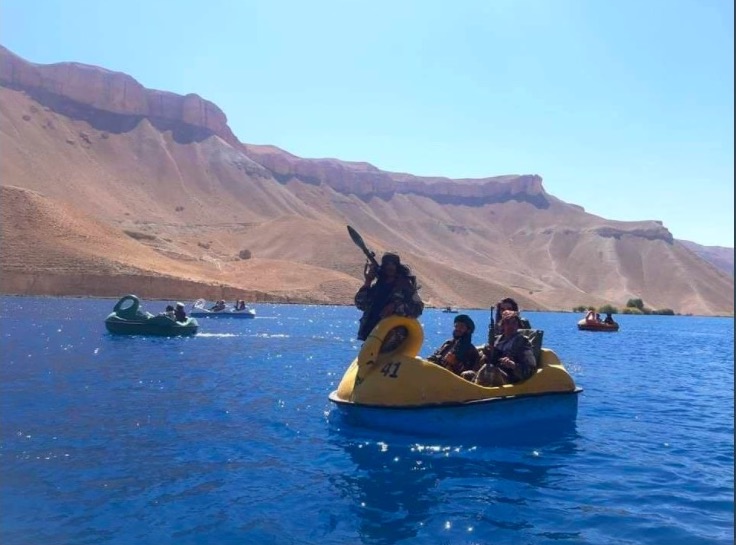 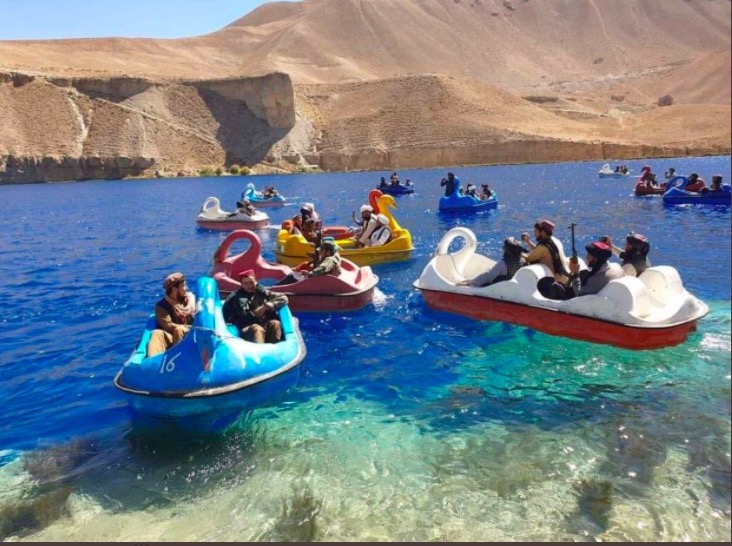 (These photos are real) pic.twitter.com/oWHJXDpVfZ

That’s um… a little less impressive than I’d have imagined.

Actually, it’s downright weird. Especially the guy standing up with the RPG. Why would you need an RPG on paddle-boats?

I wonder if he annoyed his friends by bringing it along. Can you just imagine?

“Oh, look. Here comes Abdul with his RPG… again. That guy is such an attention whore! He just wants to get photographed so he can get more followers on Instagram. It’s so annoying! I hope he drops it in the water. That’ll teach him!”

The New and Improved* Taliban have been trying to distance themselves from the soccer-stadium beheadings that they were known for in 2001.

(*Product may be different from advertised.)

Perhaps their PR team doesn’t realize that the images of heavily-armed Taliban militants don’t exactly scream “We won’t kill you.”

But, the Taliban 2.0 wants you to know that they put their shalwar (pants) on one leg at a time, just like you do.

They even let their hair down sometimes.

See, now that would be dangerous with an RPG.

But they can have fun without RPG’s on occasion.

And this isn’t bizarre at all…

But remember, it’s not all fun and games… they’re committed to keeping themselves in tiptop shape.

Is this video of the Taliban trying to work out real? These are the guys who overpowered the Afghanistan military, ousted the government, and took over the entire country in a few days? pic.twitter.com/M4QVPj3DdN

And they have actual work to do, like making sure that women know their place — which, to them, is on the fringes of society where they are neither seen nor heard.

This is for those who believe Taliban is being reformed and they are going to build a country and respect human rights and women.
They are doing that to her because she was on the motorbike with her brother in law taking her to the doctor as she was sick
Now Taliban has a country pic.twitter.com/Je6QkNp0ft

Actually, that might be fun and games for them. After all, these are the same people forcibly “marrying” 12-year old girls. Maybe it’s just me, but I think that people willing to rape children — especially those who claim to have it sanctioned by their religion — are capable of all kinds of atrocities and should be relieved of their ability to continue to do so in a slow, painful manner. But then, maybe that’s just my own personal hangup on holding 12-year old girls as sex slaves.

But other than raping children, marginalizing women, torturing and killing any opposition, a penchant for terrorism, and their love of Islamofascism… they’re just like everyone else. They even like ice cream just like the President of the United States. 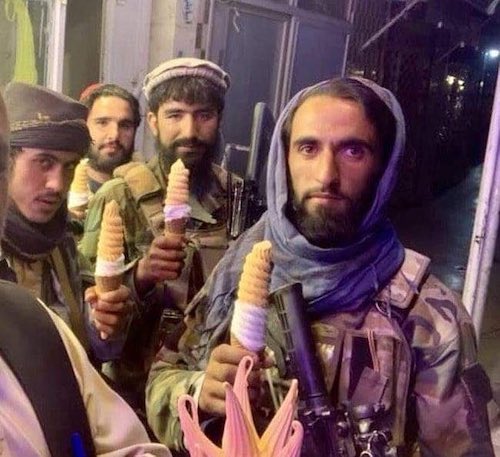 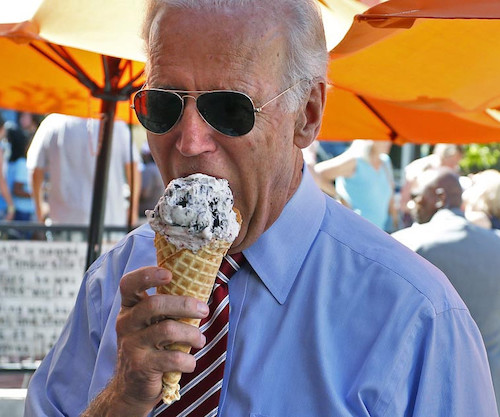 Okay, so maybe they don’t have that same kind of joy that Joe has with his ice cream, but they didn’t have chocolate chips. Not even sprinkles. Oh, the humanity!

So, as you may have guessed by now, that’s not really the Taliban Navy. Shocking, I know.

It’s actually part of a PR stunt by the Taliban as part of their “rebranding” effort.

Taliban fighters have been pictured enjoying a sunny afternoon riding pedalos in a famous Afghan beauty spot during a fresh wave of unrest against the new regime.

The surreal scenes were shot at one of the six lakes at Band-e Amir National Park, nestled in the Hindu Kush mountains in the centre of the country.

Images believed to have been taken by Taliban officials show fighters wielding rocket-launchers and assault rifles as they float around in the colourful swan-themed vessels.

The visit appears to be a PR stunt arranged in the midst of anti-Taliban protests rocking the capital of Kabul.

It was arranged by Anaamullah Samangani, a senior figure orchestrating the extremist group’s external image, according to Emirati newspaper The National.
Source: Metro UK

“One of the most notable places in Afghanistan where people from different ethnicities and religious denominations can have family fun in an oasis of peace and tranquility,” says Richard Paley, Wildlife Conservation Society’s former Afghanistan Director.https://t.co/1CmLNDPfDQ

The Taliban 2.0 are trying to portray themselves just like you — except for their deeply-held medieval Islamic jihadist views and their desire to forcibly convert or annihilate anyone who disagrees with them.

Just because the Biden-Harris administration handed over U.S. weaponry to these backward religious zealots, that doesn’t mean there’s really anything to be afraid of, right?

The programme is called Pardaz. In this longer video, the presenter interviews a Taliban fighter who presumably outranks the rest of the lot in the studio. The presenter switches from Dari to Pashto, which unfortunately I don’t speak.pic.twitter.com/qPWexsQd2T

That’s all just intimidation, though… isn’t it?

Two journalists reporting for a news outlet in Afghanistan say they were detained and beaten by the Taliban. pic.twitter.com/1wbEo3BuG3

Protests have erupted in Afghanistan because the Taliban hasn’t actually changed — they’re just a bit more media savvy and have learned how to play on the “woke” leftists who don’t want to be called bigots. We’re probably close to the point where the Taliban gets a United Nations seat.

The thing is, it’s the same Taliban, but with a Twitter account and a PR division. And now, they’re just trolling us. Helping them along are Chinese propagandists.

Way to go, Joe! If you hadn’t screwed up the withdrawal, it wouldn’t be America looking so stupid and inept.

The world is watching and stunned that the United States military — the best fighting force in the world and it’s not even close — was completely outsmarted by a few thousand rebels in Afghanistan. It didn’t have to be this way, but here we are.