‘America’s back.’ ‘Soul of America.’ None of us really believed there was any substance to those political pledges, but did any of us dream he would fail them so quickly and so utterly?

Joe is an incompetent, sure. None of us was surprised by that. But at least he has some experienced people in the White House who would resign before watching America march itself (completely) off a cliff into the void — right?

If nowhere else, at least the military brass would have sense enough to do the right thing and slap their stars on the Irresolute Desk before it came to that point, wouldn’t they?

We learned the hard way that this was NOT the case. And even if they did, we have seen enough of the ‘Pratorean Guard’ media to know that such an act of courage would have been flipped on its head to present Joe as making the hard call even when his advisors warned him about catastrophic decisions.

Now that we’ve seen what will be sure to be an iconic photo of the last soldier to leave Afghanistan, we are all left with serious questions about what went so terribly wrong in what the media still insists was a great success.

In awe of our Sky Dragon Soldiers.

This was an incredibly tough, pressurized mission filled with multiple complexities, with active threats the entire time. Our troops displayed grit, discipline and empathy.

Below is a picture of the last Soldier to leave Afghanistan. pic.twitter.com/LnhBGHUf0M

Our objection is not to the troops, but those in charge of the strategy.

The problem is neatly summed up this way:

When our G7 allies in NATO called for an extension, Joe was adamant that we would go by the 31st if not sooner.

When people behind the podium were forced to admit that an unspecified number of Americans would not be airlifted out of Afghanistan, the spin machine cranked up reasons why it was the citizen’s fault, and not the administration’s fault. An indignant Jen Psaki railed at a reporter for using the term ‘stranded’ to describe Americans desperate to leave. Already the pivot had begun to shift responsibility for NOT leaving onto the shoulders of the ‘definitely NOT stranded American citizens’.

We were warned to leave, they said, while also having said that the government was NOT going to fall, despite a leaked phone call Joe had with (former) President Ghani saying exactly the opposite… in which Biden asked Ghani to lie about the seriousness of the situation. Joe was more interested in the NARRATIVE than in the imminent collapse of the duly-elected government by some foreign-backed terrorist insurgents. (Related story: IMPEACHMENT TIME? Biden’s Final Afghanistan Phone Call Shows How Badly He’s Been Gaslighting Us All)

It’s kinda hard to get outta Dodge when the terrorists you chose to leave in control of the city (even AFTER Americans were offered the choice to retain control until the departure) are preventing citizens from getting to the airport.

Worse still, there are a number of reports that passport-waving citizens desperately trying to get into the airport were met by Americans who refused to open the gates to them. 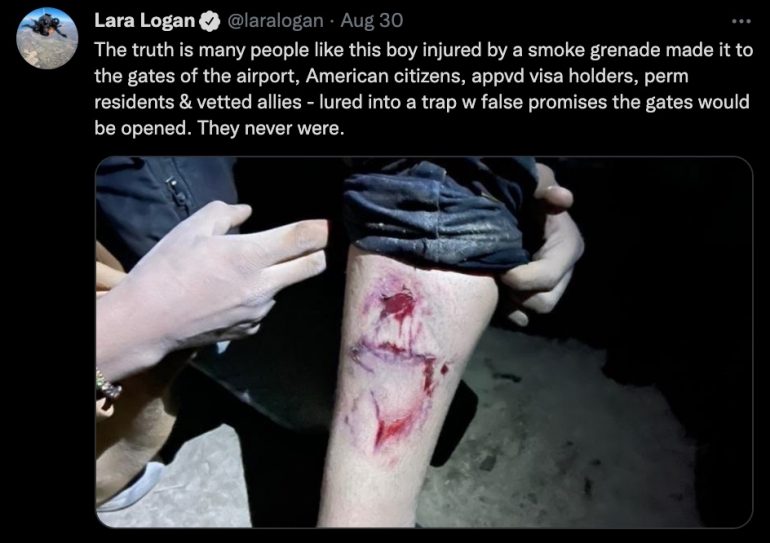 With the full withdrawal of US troops from Afghanistan leaving as many as 200 Americans stranded in Afghanistan looking for a way to get home, one California family with a 3-year-old boy is among those desperate to get out of Afghanistan.

The child is a US citizen with a passport and was born near Sacramento. His parents are permeant residents. The identity of the boy and his family is being hidden to protect their safety, according to an exclusive by ABC 7.

…The family brought that letter with them when they traveled to the airport in Kabul for evacuations. They were stopped and attacked by Taliban guards.

In regards to the incident, Brown said: “And they were stopped by a Taliban checkpoint, and they received physical beatings at the gate and they were pushed back where they had to flee and return to a safe house.” — PostMillenial

The promise he made to the Taliban that he would be out by the Date Certain was a hill he was willing to die on. Except for the fact that he knew he, personally, was in no danger of being the one doing the dying.