So… what are the odds that this article starts an uprising on the NYTimes internal message boards the same way the Senator Tom Cotton guest editorial did?

It only took 20 months for someone to actually admit in a large-audience U.S. Corporate Media outlet what the media outside North America and right-wing outlets have been saying since January 2020 — age is a significant factor in the risk of serious illness with the Wuhan Virus.

The recently-booted from Twitter Alex Berenson wrote on his Substack that his old college classmate, David Leonhardt, is the brave soul at the New York Times that is daring to attempt to put an end to some of the fearmongering surrounding SARS-CoV-2 in the NYT Morning Newsletter.

Here is the glorious headline… 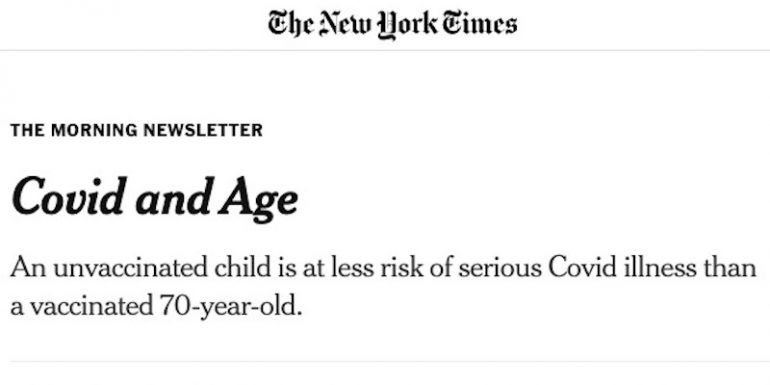 He begins his article by referring to a March 2021 opinion piece published in The Atlantic written by Emily Oster that caused quite a stir — “Your Unvaccinated Kid Is Like a Vaccinated Grandma”.

In the article, Oster compared the children’s risk of serious illness using CDC data and the reported efficacy of vaccines in the elderly. Oster urged parents to enjoy life again and not be so concerned about taking unvaccinated children out into the wide, wide world. Parents shouldn’t treat their jab-ineligible kids as though they might die if they’re exposed to the virus. The risk of that isn’t zero, but it’s pretty darn close to it… even with the Delta Variant.

“Parents can go ahead and plan on barbecues and even vacations,” wrote Oster.

Of course, people were outraged.

That sounds an awful lot like a certain orange-hued man with a penchant for long, red power ties who, after returning to the White House from COVID treatment at Walter Reed said, “Don’t let [the China Virus] dominate. Don’t let it take over your lives.”

Critics called the article “insensitive and misleading” and said that it “understated the risk that children could both get sick and spread the virus” according to Leonhardt.

Oster responded on her Substack, standing her ground on her basic thesis but acquiescing to the criticism by apologizing for the headline which she says “lacked context and qualifiers.”

Leonhardt says that seven months later, with more data on vaccine efficacy and duration, as well as more children contracting the virus as it spreads, the headline does indeed need some tweaking… he suggests that it could be, “Your Unvaccinated Kid Is Much Safer Than a Vaccinated Grandma.”

He quotes Dr. Alasdair Munro, a pediatric infectious disease specialist at the University of Southampton who wrote, “Covid is a threat to children. But it’s not an extraordinary threat, it’s very ordinary. In general, the risks from being infected are similar to the other respiratory viruses you probably don’t think much about.”

Leonhardt then does something that other journalists should pay attention and — dare I say, attempt — he cites data to prove his point.

Using charts, Leonhardt notes that one from King County, Washington shows that the risks for unvaccinated children are the same as vaccinated people in their 50s. But nationwide data from England shows a greater skew — unvaxxed kids are at about as much risk as vaccinated 40-year-olds, or even 30-year-olds.

Under a section titled, “The Threat to the Elderly”, Leonhardt digs into some uncomfortable data.

There is obviously some distressing news in these comparisons. For older people — especially the very old, as well as those with serious health conditions — vaccination does not reduce the risk of Covid hospitalization or death to near zero. That’s different from what the initial vaccine data suggested.

To be clear, getting vaccinated is still the best thing that an elderly person can do. In terms of risk reduction, a vaccine is more valuable for an older adult than a younger adult. Just compare the size of the bars in the above charts. Still, the Covid risks remain real for vaccinated elderly people.

David Wallace-Wells has argued in New York Magazine that despite the widespread discussion of Covid’s outsize impact on the old, most people are “hugely underestimating” how large the age skew truly is.

Leonhardt then goes on to say that the elderly at high risk should continue to get boosters despite waning protection of the vaccine, but in the next section of his article, he wonders… should we be jabbing the kids with a vaccine that has no long-term data and is still under a clinical trial until 2023?

All of which raises a thorny question: Should young children be vaccinated? I know some readers will recoil at the mention of that question, but I think it’s a mistake to treat it as unmentionable. There is not the scientific consensus about vaccinating children that there is about adults. It remains unclear how many countries will recommend the vaccine for young children. In the U.S., many vaccinated parents have decided not to vaccinate their eligible children yet.

Did you notice the line that is going to make the Fauci-worshippers’ heads explode?

I’ll forgive you if you think it’s the question, “Should young children be vaccinated?” because that would certainly do the trick, but that’s not the one I mean.

The one that I think will haunt the quadruple-masked social distancing sociopaths is this one: “The danger of severe Covid is so low as to be difficult to quantify.”

“So low as to be difficult to quantify” is going to be ringing in the ears of the wokescolds at the NYTimes while they choke on their $6 half-caf, no foam oat milk latte sitting alone in their 600 square foot Manhattan apartment pulling their mask up between sips.

But don’t worry… Leonhardt will likely keep his job as he insists that if he had young kids, he’d vaccinate them with the experimental vaccine developed using fetal cell lines and links to a Times Q&A on jabbing kids.

Well, at least he’s admitting that age is a major factor in serious illness from the Wuhan Virus… that’s still a pretty big win for the truth.