Imagine destroying your entire life’s work in less than 288 characters.

That’s what happened to Ibram X. Kendi on Friday.

The author, speaker, podcaster, and “anti-racism” grifter, who, incidentally, changed his name from Ibram Henry Rogers to something sufficiently “ethnic”, has repeatedly characterized the United States of America as a racist hell-hole that exists to keep minorities from succeeding.

He calls America a “slaveholders republic” and has now set his sights on liberty-loving right-wingers who don’t want to be locked in their home for the rest of their lives.

He equates Republicans wishing to open-up from lockdowns to actual Southern slave owners desiring to enslave other human beings.

His entire schtick is that “white privilege” is systemic and so rampant in America that you have to teach people — including babies — how to be “anti-racist.”

Anyone with two eyes can see he’s a far-leftist and he’s using race to divide people while simultaneously raking in the cash from idiot libs who buy into it.

It is quite a lucrative grift — Henry gets paid tens of thousands of dollars for short, virtual speaking engagements at schools, businesses, and even churches where he spouts heretical statements to the applause of the apostates filling the pews.

On Friday, Henry giddily posted a link to an article in The Hill that showed just how mean and nasty those bad, bad, horrible, white people are. The Hill was reporting that more than a third of white applicants lied about their race on their college applications. 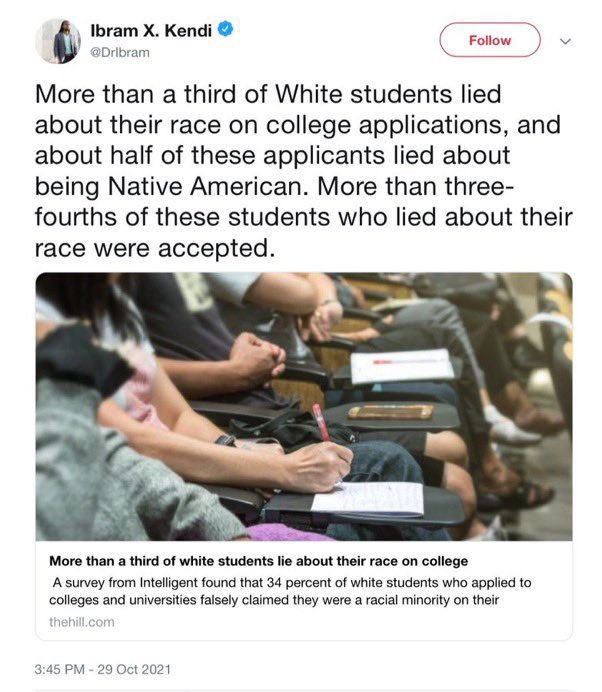 While it’s a pretty awful thing to do, Henry seems to have completely missed the crux of the issue — if there is “systemic white privilege” that suppresses minorities, then why did these white students feel the need to lie about their race on their applications?

The fact that a large percentage of white students are pretending to be minorities to get into college shows that college admissions favor minority candidates. So much for the “systemic white privilege” argument.

But continuing… that slams his entire argument, since college graduates, on average, fare better long-term than those who don’t have a degree.

The tweet literally toppled the entire “anti-racism” house of cards.

It was pointed out by several right-wingers on Twitter.

Race activist Ibram Kendi tweeted out a report claiming high numbers of white students falsely identify as people of color to reap benefits. He deleted the tweet after realizing it didn’t advance his argument that whites are privileged in every way. https://t.co/mNz0PBvO0v pic.twitter.com/XuCJf7tamp

Henry is playing a very dangerous game with his lucrative grift. Henry constantly vilifies “white” people as a monolithic group and effectively erases their individual identities and cultures, including some ethnicities that have, historically, been treated just as badly as black people were. Let’s not forget that slavery is not unique to white, Anglo settlers to America. It has been practiced all over the world.

The word “slave” itself comes from the word “slav” as in the Slavic people — Eastern Europeans who were enslaved by Muslims in the 9th century.

That’s why it is so interesting that he got into a heated Twitter war with Human Events editor, Jack Posobiec, who happens to be very proudly Polish.

Jack pointed out Henry’s mistake, and it didn’t go over well. Kendi then tried to tweet through it. 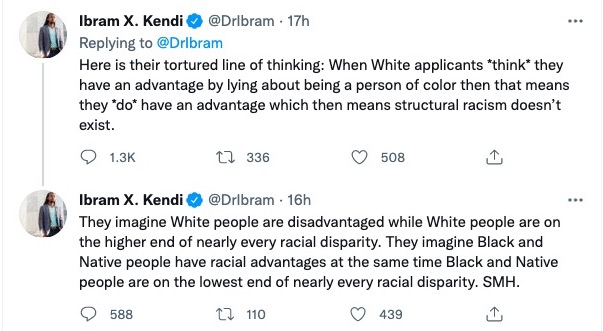 Like the rest of his arguments, that makes no sense.

He posted this then deleted it after realizing he just debunked his life’s work in one tweet pic.twitter.com/ejacsW67Z4

All I did was post his own deleted tweets. And this is how he responds. https://t.co/U50WIZQIke

Trying to tweet through it was the wrong move.

The thing is, the Man Formerly Known As Henry Rogers undermines his own arguments all of the time.

Here he is making excuses for vaccine mandates that “disproportionately” affect minority communities because he is an authoritarian leftist that doesn’t actually want to end racism — he just wants to weaponize race against white people to push his far-left agenda.

Since @JackPosobiec broke Ibram X. Kendi by repeating his own words back to him, let’s rerelease his stance on vaccine mandates.

Kendi believes that ALL policies that have a disparate racial impact are systemically racist EXCEPT for the vaccine mandates. Kendi in his own words. pic.twitter.com/4E7EY1U3Qm

Only in America can black victicrats like @DrIbram become wealthy by telling white people how they prevent black people from becoming wealthy.

Is this a great country or what?#WeveGotACountryToSave

The “Ibram X Kendi Experiene.” is basically the racial grift in a nutshell. https://t.co/tz2pmUIndI pic.twitter.com/qtw3UNa5Uj

Ibram Henry Rogers is a freaking clown grifter bully and is desperate to protect the Golden Goose he’s fabricated.