This is the moment in time when having an honest investigator that isn’t afraid to follow the facts to their conclusions would make all the difference.

Democrats, and their media surrogates, really have no excuse for protecting Joe Biden from any negative fallout of this investigation. And the fact that foreign media are making the sordid details public will make this VERY difficult to merely sweep under the rug.

Why do they have no excuse? Because we all warned them that Joe and Biden reeked of political corruption. We warned them about this when there was still the chance for Democrats to pick someone else to run for office.

‘The Plan’: Email Detailing Hunter’s Scope Of Lobbying For Burisma Turns Up In Trove

WH Spox Admits Hunter STILL Has A Stake In Chinese Business… Is That News?

They straight up called it a Russian Conspiracy when Hunter’s abandoned laptops turned up in a repair shop… even though they were later confirmed to be legitimate.

Now that the Democrats and the media have helped ‘fortify the election’ to drag someone with so many red flags across the finish line and into high elected office, they have no defense now that the truth comes out. The enablers are every bit as corrupt as the Biden Family.

The Daily Mail is digging through the email trove from that hard drive, and the solid boundaries that are supposed to exist between certain financial accounts simply were not in place. The shared accounts that Joe and Hunter had could potentially expose Joe to exactly the sort of corruption allegations we’ve all been trying to get someone to care about for years now.

Remember, the FBI and the IRS are both already investigating these accounts over his foreign dealings. They have been for quite a long time. And that’s before Obama’s ethics advisor started screaming about Hunter’s ‘totally legit’ art shows run by a guy with an actual criminal record.

And with the ugly details as public as they are, sweeping them under the rug won’t be nearly as straightforward a task as it was for, say, Hillary’s email.

Emails recovered by DailyMail.com from Hunter’s abandoned laptop between Hunter and Eric Schwerin, his business partner at consultancy Rosemont Seneca, show Schwerin was working on Joe’s taxes, discussing the father and son paying each other’s household bills, and even fielding requests for a book deal for the then-vice president, as well as managing the donation of Joe’s senate papers to the University of Delaware.

…Hunter’s claim that he and his father shared a bank account also raises serious questions whether funds from the alleged joint account were used for Hunter’s May 2018 week-long bender with a prostitute in a Hollywood hotel.

Last December, Hunter admitted in a public statement that he was under federal investigation over his tax affairs.

A former federal prosecutor and expert on money laundering and criminal tax law tells DailyMail.com that if money was flowing between Hunter and his father, that could make Joe a target of the probe – but that investigators would have a tough time sitting down with the president.

‘Whatever transaction you’re looking at, if there’s a connection to a family member or a friend, sure the answer is yes [they would be investigated],’ the ex-prosecutor, who asked not to be named, said. —DailyMail

How many times did Joe swear up and down that there was absolutely no connection between his role in the White House and Hunter’s business dealings? Which means things like THIS absolutely never happened. 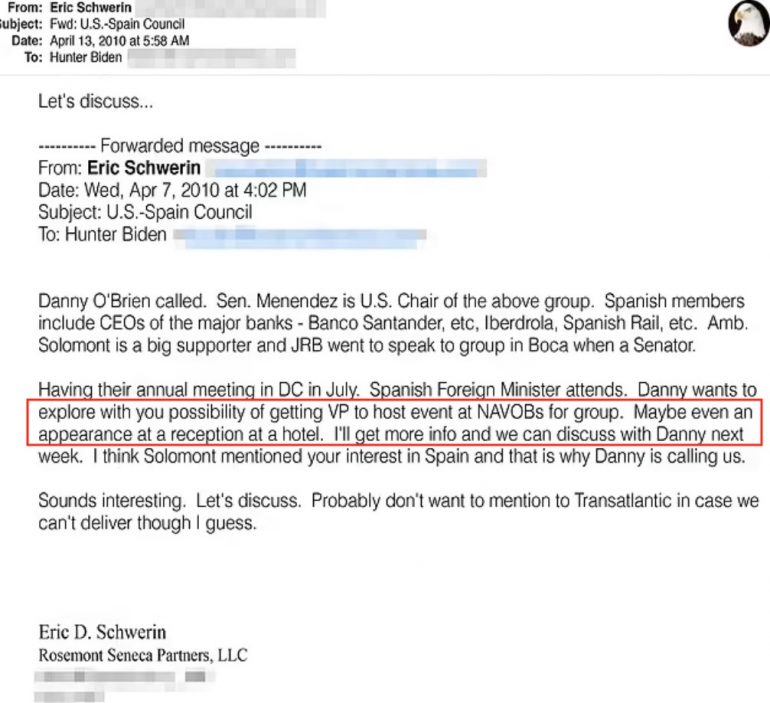 Despite any specific evidence to the contrary…

‘The information available publicly is very worrisome, particularly in the areas of corruption,’ Cassara told DailyMail.com.

‘They could go at this from all different avenues. Follow the corruption trail and then charge money laundering.

‘Corruption is a predicate offense for money laundering. And besides corruption, it’s the perception of corruption. This kind of thing should not be happening. It undermines full faith in the US government. It undermines trust and our international reputation. It’s an embarrassment.’

In yet more evidence of the deep commercial relationship between Hunter’s firm and the VP’s office during Joe’s tenure, Rosemont Seneca received special favors from the White House while Joe was in office, including dozens of tickets to exclusive 1600 Pennsylvania Avenue events and private tours for Rosemont Seneca clients or associates. —DailyMail

Pelosi must be excited about this investigation, after all, just this week she said this in defense of her legislation giving the IRS authority to look into the bank accounts of ordinary citizens.

“With all due respect, the plural of anecdote is not data,” Pelosi said of bank customers who don’t want their information reported to the IRS. “Yes, there are concerns that some people have. But if people are breaking the law and not paying their taxes, one way to track them is through the banking measure.” — MSN

If only someone had made the public aware of such corruption before he was sworn in. Oh right. The entire right-of-center media was telling anyone who might listen… while Big Tech, the Corporate Media, and scores of ‘intelligence officials’ worked together to literally prevent stories about this corruption from being shared publicly.

All because ‘Orange Man Bad’.

Now we’ve got a man who’s got damning evidence of being corrupted by foreign money making decisions from behind the irresolute desk.

On whose interests are the decisions he is making being made?

America’s? His party’s? His own? Or worse…

Does someone working in the interests of a foreign government have leverage on him?

You see, there is a REASON we want our elected officals to be free of political corruption and foreign entanglements. This is that reason.