Since the man obviously has access to the ACTUAL White House… why is he doing these appearances at a fake one? 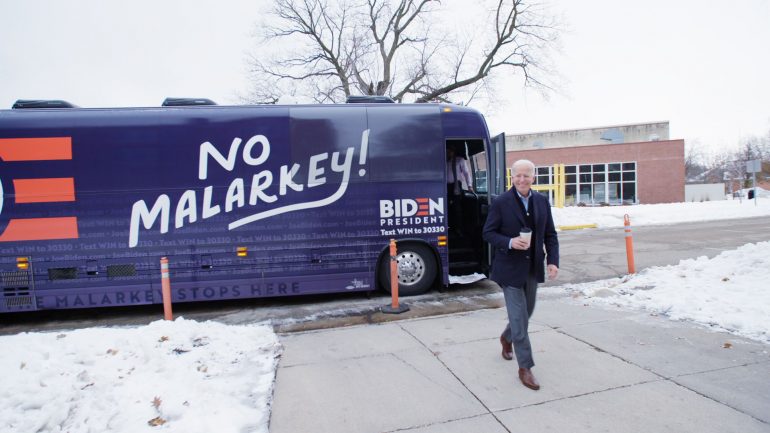 …set himself up for a really embarrassing fall when he is shown to be full of it.

He ran as a ‘return to normalcy’ candidate. Then again, he also claimed to be running as a moderate centrist, and we saw how THAT worked out. When AOC promised last year to pull him into their policy influences, even she didn’t dare hope that Joe would end up pushing policies well to the left of Bernie’s platform… but here we are.

He was going to be a straight arrow. Mr. Transparency. Integrity personified… blah, blah, blah… the usual schtick.

But there is a danger with building yourself up on moral high ground that you aren’t actually standing on, isn’t there? You wind up looking like this guy…

Watch that ‘No Malarkey’ schtick dissolving before our eyes in real time.

Here’s what Joe WANTED the world to see…

This afternoon, I held a meeting with business leaders on the need to raise the debt ceiling. We discussed the urgency of this moment and the devastating impact it could have on Americans’ pocketbooks. pic.twitter.com/IT6YlFDNro

Here’s what we ACTUALLY saw…

When you're running the country from a movie set, but don't hire people with enough production talent to make the propaganda believable. pic.twitter.com/NNmdEWouGI

‘It looks like we have lost the feed there’… came immediately after the camera zoomed out wide enough to see that this wasn’t a real room somewhere in the White House, but a studio set mocked up to LOOK like the White House.

If you missed the FIRST example of Joe being caught pretending to be somewhere he wasn’t — about which the media remained suspiciously silent — we covered it here: ‘STAGED’: Biden’s Booster Was Not What It Seemed … Is ANYTHING About This Admin Real?

Stephen Miller had an idea of why Joe would want to use that bogus White House set rather than the real deal. It has something to do with Biden’s legendary inability to open his mouth without embarrassing himself on camera.

The reason Biden uses this bizarre virtual set for televised meetings—and not an actual room like East Room, Cabinet, Oval, Roosevelt, Sit Room, etc.—is because it allows him to read a script directly from a face-on monitor (& w/out teleprompter glass that can be seen on camera). https://t.co/Uc4Ly9kL7T

The video set, which was constructed across from the White House in the South Court Auditorium in the Eisenhower Executive Office Building, is used by Biden for video conferences and events broadcast online. Featuring professional monitors and lighting, it is the same set Biden used to show himself receiving a third dose of the Pfizer/BioNTech Covid-19 vaccine. –FoxNews

Keen eyes noticed that the fake windows showed the garden in full bloom.