Hollywood Actors love the limelight, until something tragic like this happens.

He was filming the movie ‘Rust’ when there was a tragic mishap on the set. Now, a 42-year-old coworker is dead, a director is wounded, and Baldwin was left holding the gun.

Halyna Hutchins, 42, was the director of photography for the film being shot on a ranch in New Mexico. Joel Souza, 48, was also injured, but not fatally when a ‘prop’ gun was discharged on set with disastrous results.

The Santa Fe County Sheriff’s Office has confirmed that director of photography Halyna Hutchins was the crewmember killed on the New Mexico set of Rust, where star Alec Baldwin was holding a prop gun that misfired, striking Hutchins and director Joel Souza. Production has been halted “for an undetermined period of time.”

…Deadline previously heard from sources that a principal castmember cocked a gun during a rehearsal, unaware that there were live rounds in it, hitting two people, a man and a woman. The man was hit in the shoulder, while the woman was airlifted to the hospital for stomach surgery.

A production spokesperson from Rust Movie Productions LLC told Deadline, “There was an accident today on the New Mexico set of Rust involving the misfire of a prop gun with blanks. Two crew members have been taken to the hospital and are receiving care. Production has been halted for the time being. The safety of our cast and crew remains our top priority.”

The set was put on lockdown and an old church on the set was blocked off, according to local press reports. Bonanza Creek Ranch is known for Western-set productions. — Deadline

She took a lethal round in the stomach. What a hell of a way to go out.

Under ordinary circumstances we would have the utmost sympathy not only for the victims who had been shot, but also for the actor who had unwittingly fired something he thought was really no more dangerous than a toy.

But then we were reminded that this is Alec Baldwin. And that he’s a smug sonofagun who exhibited absolutely no empathy for others in similar situations…

Let’s take a closer look at the image on the left, shall we? 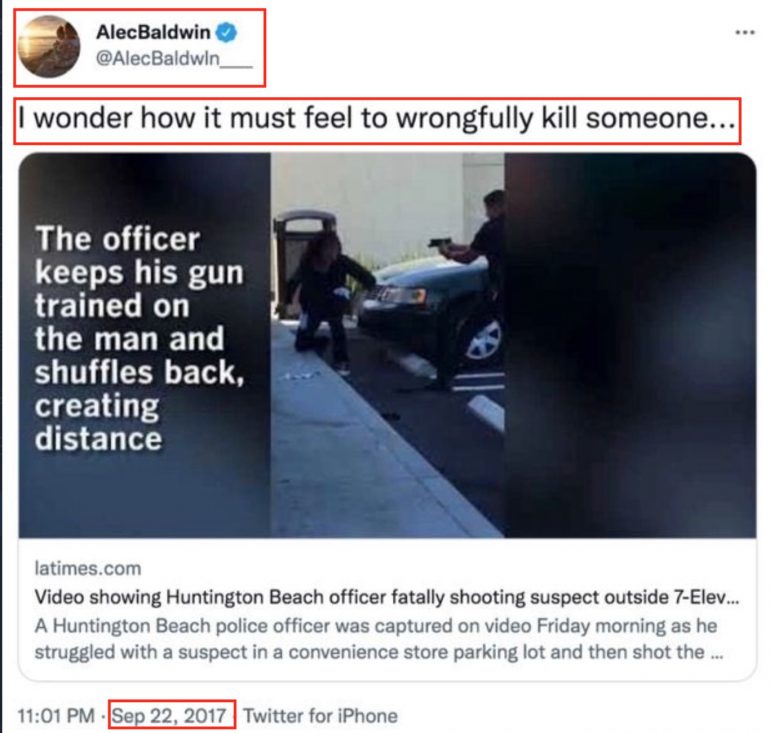 And just like that *snaps fingers* our urge to handle him with kid gloves in this situation suddenly evaporated. Let’s extend to him the same empathy he has given others, shall we? We won’t pull punches or mince words.

Well, Alec, you don’t have to wonder any longer about how it feels to wrongfully kill someone, do you? You have first-hand experience, and blood on your own hands, you freaking ghoul. Only this time you weren’t just play-acting with a director who can call ‘cut’ when the scene is over.

Judging by reports of how he was spotted crying afterward, it’s tearing Baldwin up exactly the same way it was probaby tearing up the cop he mocked in that tweet.

We could weigh in on the basic principles of gun safety (like what the NRA could have taught him if he weren’t so busy protesting them), or of best practices on set.

Instead, we leave with this solemn thought.

Alec Baldwin has now, officially, killed more people with gunfire than 99% of the lawful American gun owners he routinely demonizes.

The next time he wants to pop off about honest gun owners he knows nothing about, he can pour himself a steaming hot cup of STFU.

Lets turn that criticism he likes to throw around back on it’s source, shall we?

And yet he owes most of his wealth to an industry that could hardly sell a movie ticket if they could no longer write sex or violence into their scripts. It seems he was even playing the bad guy in this movie.

Hollywood’s conscience, we are told, is too tender to show a cigarette on screen for fear it might encourage smoking. And yet, it routinely shows people blowing other people away on the big screen.