An investigation conducted into the alleged abuse appears to poke some holes in the parents’ version of events.

A police report determined that a Florida school and its teachers did not commit a crime or child abuse after it emerged last month that they tied a mask to the face of a student with Down syndrome.

“There is insufficient evidence to support a criminal violation” against the teacher and instructional assistant of 7-year-old Sofia Bezerra, reads a police report from the Indian Harbor Police Department, which Fox News obtained Sunday. “There was no evidence presented which supports that Sofia received a physical or emotional injury. This case is closed as Unfounded.”
Source: Fox News

Metadata from the photo provided to investigators shows that they were taken days after Sofia came home with the wet mask tied to her face.

While it was clear that the photos weren’t taken immediately after the event — the mask was a clean one and wasn’t “soaking wet” from Sofia’s saliva — Sofia’s mother had indicated that after taking the mask off of Sofia, she later put it back on again to take the photos. Metadata from the photos show that they were actually taken two days later and there are conflicts with her statements as well as Jeffrey Steel’s statements to police regarding the timing of events.

The investigation shows that staff did tie a mask on Sofia — apparently without parental permission — but that she didn’t ever exhibit signs of distress.

Florida Today reported on the police investigation, which found no evidence of abuse from the staff toward the girl.

“As witnessed by multiple teachers, school aides, bus drivers, and school administration staff, at no time, while having the mask tied on, did (Sofia) ever exhibit any signs of distress, discomfort, difficulty breathing, or any other health concerns,” the investigators wrote in their report.

Video evidence showed that the girl actually seemed to prefer wearing her mask, and her only outburst came during a time when she was forced to not wear a mask.

“On at least one occasion, Sofia was observed on video placing the mask on herself; on another, her teacher told police, she ’threw a temper tantrum’ when she was not allowed to wear her mask,” police wrote.
Source: Independent via MSN News

The report was first made public by Florida Today.

Police have determined accusations of child abuse in the case of a 7-year-old girl with Down Syndrome who came home from school with a mask tied to her face were "unfounded." https://t.co/HP8gzQnNCR

Now that police have found no evidence of abuse as Jeffrey Steel had repeatedly claimed, opponents of Ron DeSantis and other GOP politicians in Florida who promoted the story are demanding retractions and apologies.

Some have pretty clear agendas like this teacher and “public education advocate.”

I don’t expect @VoteRandyFine to apologize for all the statements he made about this case, but what about you Rep. @JasonFischerFL?

Are you honorable enough to apologize for saying there is a special place in hell now and hat that claims have been investigated & are unfounded? https://t.co/M109N5fVAw

One of the people drawing attention to the “misinformation” is a lawyer named Daniel Uhlfelder, who gained national attention when he dressed as the Grim Reaper to criticize Governor Ron DeSantis’s handling of the pandemic.

This misinformation was investigated and proven to be false. However, it was also pedaled by Ron DeSantis, Tucker Carlson and others https://t.co/VOXJMNng0R

There are agendas on both sides.

Despite the apparent contradictions, false statements, and no evidence of child abuse, the Steel family is still pursuing a civil suit against the school. Sofia’s parents say that they didn’t know for certain that she was being masked in school until the police conducted the investigation.

“It seems there was an intentional effort by the school district to conceal the fact that they were masking her for six weeks,” Nick Whitney, the family’s attorney said.

The family said Sofia was exempt from the policy because she has Down syndrome and teachers were not supposed to mask her without the family’s permission.

According to the police report, teachers said they used a shoelace to tie the mask to Sofia’s face to keep it from falling down, which is the recommendation they found on the Down Syndrome Resource Foundation’s website.

“Perhaps maybe they had the best of intentions. But, it was poorly implemented and caused Sofia grave danger,” Whitney said.

The family does not want anyone in jail, but Whitney said they do want the district held accountable, which is why they plan to file a civil suit.
Source: Fox 35

In the original article below, ClashDaily had included a link to a GiveSendGo page to cover legal fees for Sofia’s family. They had raised over $104,000 of the $200,000 goal. We have made the editorial decision to remove the link.

How does someone do this and not realize that they’re abusing a child?

Governor Ron DeSantis has stood up for parents making the decision whether or not to mask their children in schools, and he’s had a lot of pushback from leftists, the Corporate Media, and school boards who are so terrified of the China Virus that they’re fine with making children suffer unnecessarily.

DeSantis has said that he would fine schools that impose mask mandates on their students instead of leaving the decision with parents. If terrified parents want to mask their kids, they’re still free to do so, but parents who don’t want their kids in a filthy mask all day can choose not to inflict that on their children.

One of the counties that have been all-in on mask mandates for students is Brevard County on the east coast of the state. (FYI, Cape Canaveral and Cocoa Beach are both located in Brevard County.)

In September, DeSantis warned Brevard schools that they could face fines if they continue to impose mask mandates on students.

They apparently didn’t listen. Ocean Breeze Elementary School decided to take their mask mandate further and tied a mask on the face of a non-verbal 7-year old girl with Down Syndrome named Sofia. 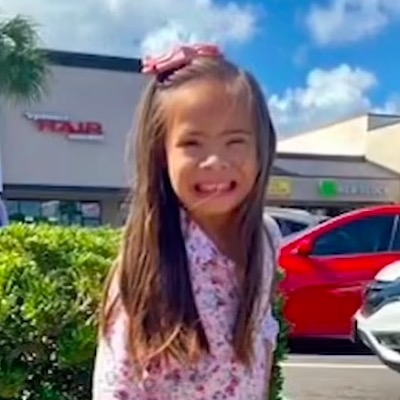 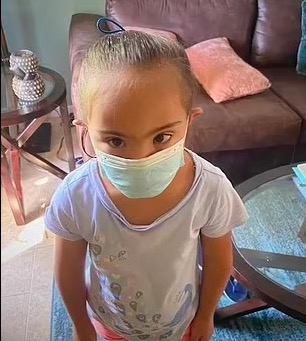 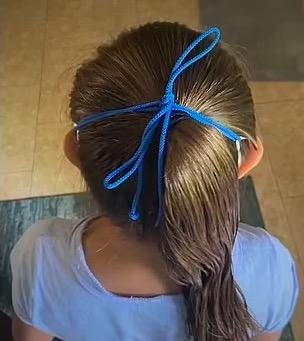 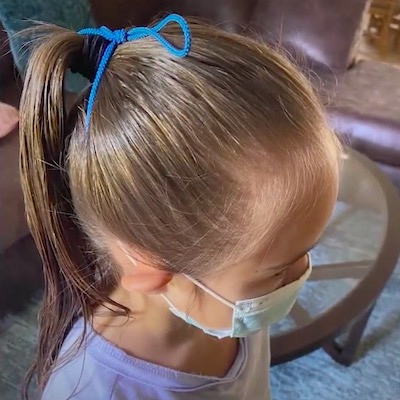 Sofia’s parents had no idea that this was happening since the beginning of school because she was unable to tell them. They only learned of it when she came off the school bus on October 7 wearing a mask that was wet from her saliva and tied to her head with a thin, nylon string.

Wearing a mask for hours daily can cause skin and dental problems in healthy people, but there are complications for those with special needs.

Sophia has an enlarged tongue and breathes through her mouth, so wearing a mask for her can be dangerous or even deadly — she could aspirate, her breathing could be compromised by the wet mask and cause a seizure, or she could asphyxiate.

Sofia has an individual education plan (IEP), and educators are supposed to inform parents of any changes made to their children’s IEPs, Steele said. But the school never informed him or his wife that they were going to require Sofia to wear a mask, and no one asked the parents for their consent in tying it to her face during school.

Steele emphasized that his daughter breathes through her mouth and cannot speak, so wearing a mask is dangerous for her health in more ways than one.

Jeffrey Steel says that he didn’t report the incident immediately because he needed to calm down. He also said that October 7 was the first time that Sofia had returned home wearing a mask and suspected that the teachers had been putting it on her during the day and removing it when she was returning home.

The family is furious that they were never informed that this was being done at school.

The school had previously informed Sofia’s parents that she had been removing her shoes at school. Steele and his wife contacted Ocean Breeze around that time because they “saw big behavior changes in Sofia at home.”

“We wanted to work with the school — we were working with her IEP — because we were getting notes all the time about Sofia’s behavior at school,” Steele said. “This was concerning to us because we were seeing the same sort of negative behavior at home, and we told them that. We still did not know there was a mask on her face at this time.”

Steele has hired an attorney and is pulling his daughter out of Ocean Breeze.

“We don’t want her to be a spectacle,” the father said. Sofia’s parents have also set up a fundraiser for their daughter on GiveSendGo called “Sofia’s rights.”

DeSantis and Republican Florida Rep. Randy Fine highlighted Sofia’s story on Wednesday, and Fine is considering introducing legislation during a special session that would increase penalties for people who force children to wear masks without their parents’ consent.
Source: Fox News

In the description, Steel writes that when he met with the school, they admitted that they had been masking Sofia for weeks without parental consent. This violates Florida’s Parents’ Bill of Rights with the school usurping parental authority on decisions that affect Sofia’s health. It also violates Brevard County’s “Emergency K-12 Face Covering Requirement” which said that “[a] face covering shall not be required for persons who have documented through an IEP or 504 plan that the person has a medical, physical, or psychological contraindication that prevents the person from being able to safely wear a face covering.”

Sofia’s family had just assumed that she would be exempt from the mandate because of this clause. They have since requested an exemption and it has been granted. However, according to the plain wording of the document, it should have been automatic.

State Rep. Randy Fine told Fox News, “This is already criminal. I…plan to introduce legislation to increase the penalty. We’re going to be having a special session in Tallahassee, and I expect that we’ll pass a law in Sofia’s honor that puts people like Brevard Heart school board members who did this to Sofia in prison for a very long time.”

Ms. Jennifer Jenkins, the educator turned school board member, can be outraged all she wants. But there should be a special place in hell for people like her that are so terrified of the virus that they don’t give a damn what wearing masks all day does to children. Especially since there is no evidence that masks on kids reduce the spread of SARS-CoV-2.

And if she doesn’t like that, then she can take it up with Florida’s new Surgeon General, Dr. Joseph Ladapo… but it’s unlikely that he’s going to be very sympathetic since he says that the state is committed to following the data and that shows that masks on kids just aren’t necessary.

And Listen To What He Has To Say About School Mask Mandates & The Data… pic.twitter.com/5kngX0UQft

When Ms. Jenkins gets her medical degree from Harvard, examines all of the data, and is appointed as the Surgeon General of Florida, she can make that decision, but until that point, the administration of Governor Ron DeSantis, which includes Dr. Ladapo, is calling the shots.

ClashDaily reported that teachers at a school in Colorado may have been taping masks to students’ faces:

The abusive masking of children by paranoiac teachers needs to end.

These COVID-psycho teachers are just more reason to homeschool your kids.