Former Secretary of State, Colin Powell, died on Monday and some of the major news failed to do their due diligence in reporting. They missed a very significant factor in his death…

The statement from the Powell family on Facebook announcing the retired four-star General’s death stated that he had passed away “due to complications from Covid 19” despite being “fully vaccinated.”

Colin L. Powell, who helped guide the U.S. military to victory in the 1991 Persian Gulf War as chairman of the Joint Chiefs of Staff, then struggled a decade later over the U.S. invasion of Iraq as a beleaguered secretary of state under President George W. Bush, died Oct. 18 at 84.

The cause was complications from covid-19, his family said in a statement. He had been treated at Walter Reed National Military Medical Center in Bethesda, Md., his family added, noting he had been fully vaccinated.
Source: Washington Post

Some on the right-wing side are jumping on this as an example of a “breakthrough” case and the clearly waning efficacy of vaccines questioning the need for vaccine mandates.

Sure, let’s have that conversation, but later — that’s not the main issue here.

The big deal in this situation is the ability of the Corporate Media to tell us the relevant facts. They failed to do so in early reports.

The Corporate Media just can’t not push a narrative, it would seem. They appeared to want to do that with the death of Colin Powell.

News organizations know that most people get their news from headlines and — if they’re really lucky — the first couple of paragraphs. The vast majority of people don’t bother to actually read articles in their entirety. That’s why news orgs hide the nuggets of truth that contradict the narrative buried deep into the article that only the extremely patient or the masochistic will ever see. That way they can say that they’ve reported the information, but most people won’t see it.

We’ve seen it time and again. Here’s just one example of this:

Why Did The New York Times Bury THIS Detail In Their ‘Trump Taxes’ Hit Piece?

We know that COVID deaths have been inflated throughout the pandemic. The Corporate Media carefully constructs a narrative that COVID is deadly for everyone and vaccines should be mandated for everyone, including those who already have natural immunity after recovering from a China Virus infection, and children who are at little risk of serious illness or spreading the virus if the get it. Risk factors don’t seem to matter to them. The narrative is the only thing that matters.

In this article from The Hill, where the family blames the unvaccinated for the death of their vaccinated father living in Florida, you could easily miss the details that he was 84 years old and had suffered from chronic obstructive pulmonary disease (COPD) for years. That’s because: a) his age was never mentioned in the article, you have to click on his obituary to get that information, and b) his COPD wasn’t mentioned until paragraph 7. The article did mention that his daughters “felt more confident he would have lived longer if he had lived in a different state” because… Florida Bad. And why wouldn’t it be? After all, the Bad Orange Man and “DeathSantis” live there, right? He’d have been better of where… New York?!

Those children who “felt” — not “thought” or “believed”, but “felt” –like their father would have lived longer if he’d lived in a place with less sunlight and vitamin D are just swallowing the narrative uncritically. Instead of celebrating that he lived until he was 84 — years longer than the average life expectancy in the United States — they’re using their father’s obituary to smack the unvaxxed because the Corporate Media has successfully indoctrinated them.

Powell was 84 years old, battling Parkinson’s disease, and being treated for cancer. It was a very specific type of cancer that affects the body’s ability to fight off infection. This was completely left out of the Washington Post article.

From the Center for Disease Control and Prevention:

The Washinton ComPost had room in their headline to mention Powell’s race and his connection to the Iraq War, but didn’t seem to have room to mention his immune-suppressing cancer that makes it difficult to fight off any sort of infection. 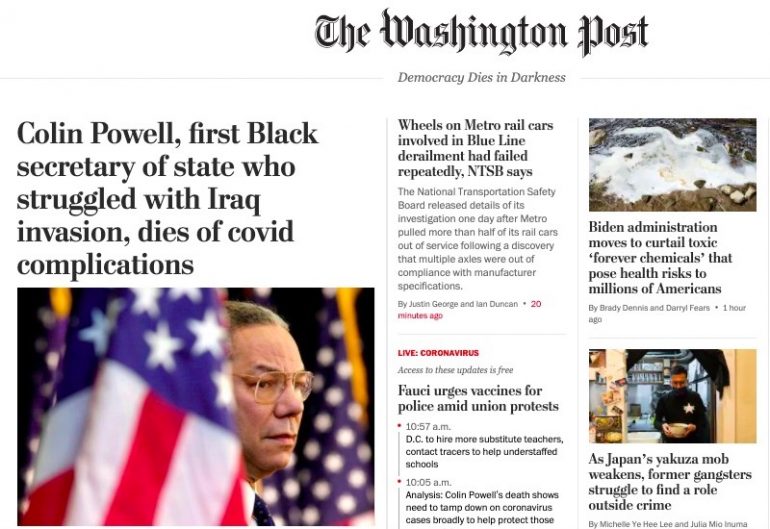 The Daily Mail reported this in the fifth paragraph.

His family confirmed his death in a statement on Facebook, but didn’t mention whether he had received a booster shot. It’s also unclear when he was diagnosed with COVID or how long he was hospitalized for, but he had previously been diagnosed with multiple myeloma, a type of blood cancer that impacts the body’s ability to fight infections.

‘General Colin L. Powell, former U.S. Secretary of State and Chairman of the Joint Chiefs of Staff, passed away this morning due to complications from COVID’, his family’s statement said.

‘He was fully vaccinated. We want to thank the medical staff at Walter Reed National Medical Center for their caring treatment. We have lost a remarkable and loving husband, father, grandfather and a great American.’ He served under several Republican administrations – including for Ronald Reagan, George H. W. Bush and George W. Bush.
Source: Daily Mail (Emphasis Added)

Early reports, however, didn’t include that “small” detail.

The Daily Mail’s initial paragraph-long headline didn’t state that Powell had been battling multiple myeloma, but they did update it later. Still, the main image with the massive headline reads, “Powell Killed By COVID.” 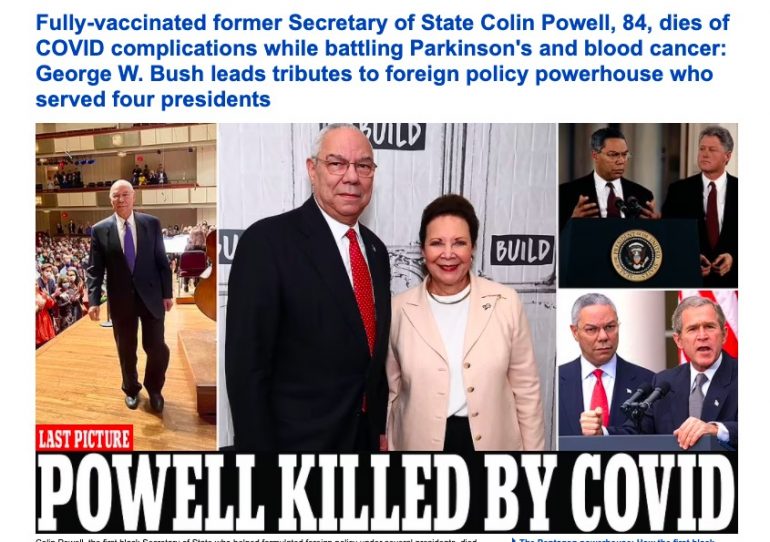 The New York Times has repeatedly edited their piece to include the information about multiple myeloma in the second paragraph, but an archived copy of the article doesn’t include any mention of Powell being treated for any type of blood cancer. 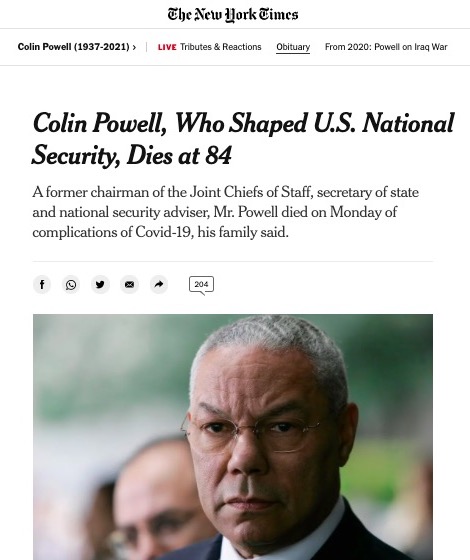 NYT has been a bit more honest now that they’ve been called out on not reporting on Powell’s treatment for multiple myeloma which seems to be a significant comorbidity to overlook.

Former Secretary of State Colin Powell was fully vaccinated against Covid, but his battle against a type of blood cancer had weakened his immune system. https://t.co/RVMa14U8Lz pic.twitter.com/mj6pzY4MLx

How do we trust these clowns?

What would we do if there were no conservative outlets to push back on this B.S.? The New York Post, The Daily Wire, and The Daily Caller all included that Powell had been treated for multiple myeloma for the past several years.

Do you think the Corporate Media would’ve changed the articles if it hadn’t been for Right-Wing Twitter calling them out on ignoring the cancer treatment?

These journos are shameless hacks who don’t want you to hear any opposing view because that exposes them for who they really are.