The jobs report fell significantly short of projections, but Democrats are calling it a win anyway.

On Friday, the September jobs number was released and it was less than half of what was expected.

Just 194,000 jobs were added to the payroll in September, falling far short of the 500,000 that were expected, and offering one of the most dismal outlooks from a US jobs report all year.

Supply chain bottlenecks and Covid-19 contributed to the unimpressive numbers.

Still, Friday’s report from the Labor Department showed that unemployment slipped more than expected, from 5.2 percent in August to 4.8 percent in September. Economists surveyed by Refinitiv had only expected unemployment to slip to 5.1 percent.
Source: Daily Mail

As you can imagine… Republicans “pounced.”

69% of Americans believe Biden is doing a poor job on the economy.

Today’s jobs report is a disaster:

*Prices are rising faster than wages

Biden has squandered the recovery he inherited!

GOP lawmakers weighed in as well.

Another disappointing jobs report for this administration.

Our economy remains well short of full employment—having only added 194K of the 500K expected jobs in September.https://t.co/hk3LYyphl0

The September Jobs Report was ABYSMAL.

Joe the Job Killer isn't building anything back better!

The Biden economy is a colossal failure.

This month, only 194,000 jobs added out of the 500,000 expected. "Dropping the ball" seems to be a common theme these days whether we're talking about the border, Afghanistan, inflation, or in this case jobs. When will it end?https://t.co/o7jx9pbv2X

As the new numbers dropped, the cable news journos didn’t have the luxury of time to come up with spin.

The team over at CNBC couldn’t hold back their surprise.

CNN didn’t hold back saying it was the “worst of the year.”

CNN says the September jobs report is "way less, way less than anybody expected…and the worst of the year." pic.twitter.com/xvKLkwfwoN

In other words, the Biden Stagflation continues.

There have been calls to fundamentally change America – its happening! We are a nation that used to love and appreciate work now we refuses to work or can't because of forced mandates and restrictions.

As did small business expert and entrepreneurship guru, Carol Roth:

Good thing that govt is pushing employers to fire their unvaxxed workforce- that should help!

As the economy emerges from the havoc of the Delta variant, many employers are still struggling to find workers as those who lost their job due to the pandemic have yet to start looking again.

Federally enhanced unemployment benefits officially ended in September, meaning unemployment checks shrank by $300 a week, but so far ending the benefits has not spurred a momentous return to the workforce.

Governors in about half of US states ended their enhanced benefits before the Sept. 5 deadline.
Source: Daily Mail

But the administration and their media sycophants on Twitter are calling it a win anyway.

Here is Turncoat Bill Kristol — a newly-minted Democrat because Orange Man Bad — tweeting out his spin on the jobs report.

The unemployment rate's 4.8% and YOY hourly wage growth 4.6%. Not bad at all. If fewer Americans want to work–so long as they're choosing not to work (perhaps temporarily) rather than suffering from conditions that don't allow them to work–isn't that ok? It's a free country.

The unemployment rate is now down to 4.8% — in just eight months. We've created 2x more jobs under @POTUS in his first nine months than any administration in history.

The incestuous relationship between the Democrats and the corporate media is well-known, but in this post-Bad Orange Man age, there are some journos that want to launch their leftwing street cred with a retweet or two from the Chief Joe Biden handler.

A retweet from the White House Chief of Staff seems to be a goal that some journos are shooting for. The more sycophantic to the Biden-Harris administration, the better.

POLITICO reported that Jennifer Rubin, WaPo’s “conservative columnist” who is suddenly pro-Democrat on every single issue, was retweeted by Klain repeatedly. Klain seems to realize it’s not a good look to be exclusive so early on in the administration, so he’s abruptly ceased after the September report. (Watch out, Ron! You know what they say about a woman scorned!)

The thing is, it appears that a number of the political journos are looking for that sweet, sweet Klain retweet. And boy, does he dish them out. (Even to himself!) 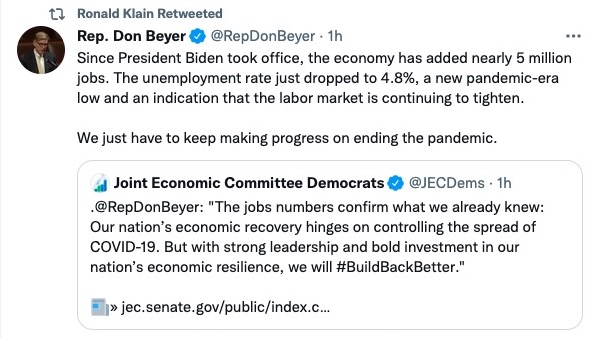 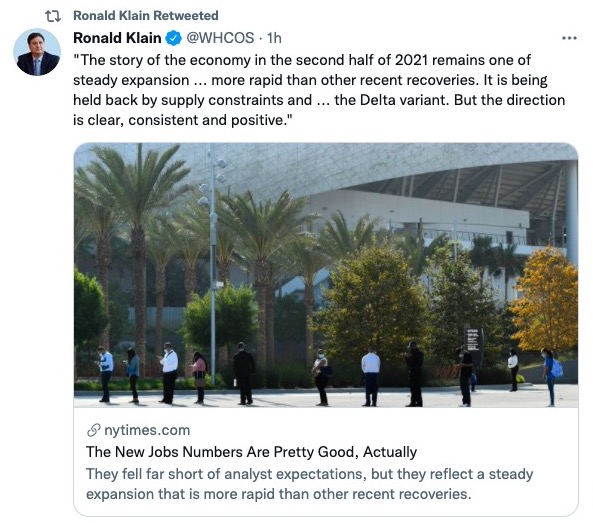 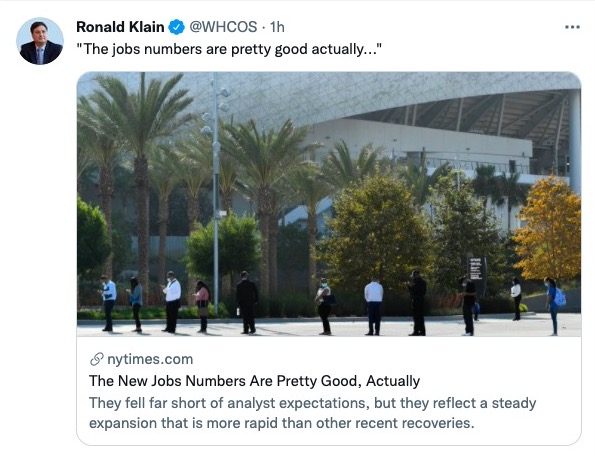 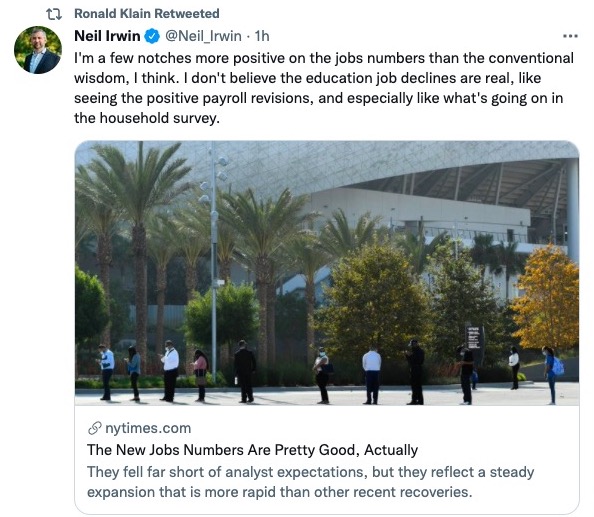 Just how bad is Klain at with spin? He retweeted a poll to try to counter the recent Quinnipiac poll that shows that Biden is losing approval on everything — even on who he is as a human being.

This is only going to continue, and the spin is going to be that there needs to be more “investment” because these Dems can’t understand that you can’t spend money that you don’t have.

But then, they put forward this incompetent buffoon as their leader while the sycophantic media covered up the Hunter Biden story, allowed Joe to hide in the basement, and vilified Trump.