The murder of Sir David Amess, a British MP meeting constituents in a Methodist church is, in fact, being treated as a Jihadi Terror attack. He was stabbed 12 times.

The murder of Sir David Amess is being treated as a terror attack ‘linked to Islamist extremism’ as officers raid two homes in London and a British Muslim of Somali descent remains in police custody.

…MI5 are also said to be taking part in the investigation and will be looking into whether the suspect was known to authorities through the anti-terror PREVENT scheme.

The force says the early investigation has revealed a potential motivation linked to Islamist extremism.

It is believed that he acted alone, and investigators say they are not looking for anyone else in connection with the incident at this time but say enquiries into the circumstances continue. –DailyMail

While Democrats are still wringing their hands over the Threat to Democracy™ posed by the ‘insurrection’ of Jan 6, we have news of a conservative politician being stabbed to death in a meeting with his constituents.

The left has been really struggling with the ability to gain perspective on what a real threat to democracy looks like. Just this week, eco-activists on the left have stormed government buildings to achieve their political agenda, but Democrats aren’t screaming about this threat to Democracy any more than they did when the Kavanaugh hearings were disrupted by leftist protests, or AOC led her merry band of eco warriors into Pelosi’s office to take it over. But let some guy with an (R) after his name put his feet on her desk, and democracy has just been toppled.

The mock horror Dems gin up for Jan 6 looks positively comical when measured against an ACTUAL threat to Western democratic institutions — say, the murder in cold blood of an elected politician.

This is what an ACTUAL attack on Democracy looks like. 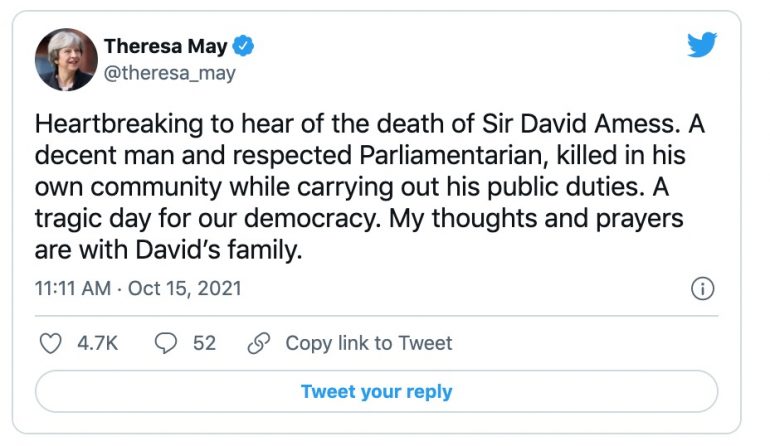 Sir David Amess, a 69-year-old father of five, was meeting his constituents in a public meeting in a Methodist church when a man rushed him with a knife and stabbed him. The wounds proved fatal, and he was pronounced dead at the scene.

In a case of tragic irony, it was only a few months ago that he had been calling for Boris Johnson to do something to respond to the ‘knife crime’ epidemic ‘plaguing Britain’.

He has been in politics since the 1980s, was prominent in the Brexit battle (in favor of Brexit), and maintained a conservative hold in a supposedly swing riding for a couple of decades.

The lifelong backbencher never served in any top government positions but was well-versed in how to lobby ministers from the backbenches.The MP long had a passion for animals and was patron of the Conservative Animal Welfare Foundation – along with the PM’s wife Carrie. He also campaigned against fox-hunting.Sir David was a Roman Catholic and opposed abortion laws and same sex marriage. —Sun

It is worth pointing out that he is described as a decent man who was liked by people across the political spectrum, as the Prime Minister stated…

“I think all our hearts are full of shock and sadness today at the loss of Sir David Amess MP, who was killed in his constituency surgery in a church after almost 40 years of continuous service to the people of Essex and the whole of the United Kingdom.

“And the reason I think people are so shocked and saddened is above all he was one of the kindest, nicest, most gentle people in politics, and he also had an outstanding record of passing laws to help the most vulnerable, whether the people who are suffering from endometriosis, passing laws to end cruelty to animals, or doing a huge amount to reduce the fuel poverty suffered by people up and down the country.

“David was a man who believed passionately in this country and in its future.

“And we’ve lost today a fine public servant and a much-loved friend and colleague, and our thoughts are very much today with his wife, his children, and his family.” –EveningStandard

And now David is dead. Murdered during an act of public service — while engaging with his constituents in a public event.

No details about his attacker, beyond being a male aged 25, have yet been released to the public.

We do not yet know whether the attacker is ‘previously known’ to police, whether he has any established connections to activist or extremist groups, nor have we any other clues as to what may have prompted this brutal attack.