The National Institute of Health has given a grant to a Texas hospital to study the use of four drugs in treating SARS-CoV-2 — including the Drug Which Must Not Be Named.

Included in the study are inexpensive, unpatented, repurposed drugs including the one with a massive meta-analysis that some “developing nations” have been successfully using for prevention and treatment of the China Virus — Ivermectin.

Researchers at Texas Tech University Health Sciences Center El Paso will use the grant to examine the effectiveness of four repurposed drugs, including ivermectin.

The team hopes that if just one of the drugs turns out to be effective, it can be used at home once a person finds out they are infected with Covid, reserving hospital beds for the sickest of patients.

‘Usually treatments for diseases take many years to develop, and everything we’re doing is on a fast track because people need it now,’ Dr Edward Michelson, chairman of Texas Tech’s Department of Emergency Medicine, told The Washington Post.

The $1.7 million will go towards two separate clinical trials: a national trial, known as ACTIV-6, and a local trial.

The nationwide trial will look at three drugs approved by the U.S. Food and Drug Administration (FDA) and see if they can treat mild-to-moderate cases of Covid.
Source: Daily Mail

Well, it’s about bloody time! Nice to have vaccines and all, but therapeutics are much more useful especially now that we know that the virus ain’t going anywhere and the “rare” breakthrough cases don’t seem so rare.

But that’s not all that the NIH did.

It seems that the NIH has also quietly updated its website in July to include Ivermectin as an “agent that is approved or under evaluation for the treatment of COVID-19.”

Would you look at that!

This was pointed out on Thursday by Dr. Robert Malone who invented the mRNA technology that the Pfizer and Moderna vaccines use.

Note the language used in this official NIH website, in contrast to the propaganda and hyperbole spread through the legacy media and their paid “fact-checkers”/narrative reinforcers regarding this “horse drug”. pic.twitter.com/yLZKTtj6xe

Most serious side effects- “Neurological AEs have been reported when IVM has been used to treat parasitic diseases, but it is not clear whether these AEs were caused by IVM or the underlying conditions.”

Here is the section on Ivermectin with dosing recommendations from the NIH.

A cynical person might think that since we’ve come to a point where the Pfizer vaccine has FDA approval, requires boosters, is going to be approved for children, vaccine mandates are in place, and Big Pharma has already raked in Big Profits from the jab — inexpensive, repurposed mediations can now be tested. After all, the “emergency use authorization” could only be given if there were no viable treatments.

It should also be noted that there is another meta-analysis of early treatments for SARS-CoV-2 available here that shows that Ivermectin has shown some positive results.

It shows that in a collection of studies that includes over 48,000 patients, it’s been shown to improve symptoms 66% of the time and costs about $1 per dose. 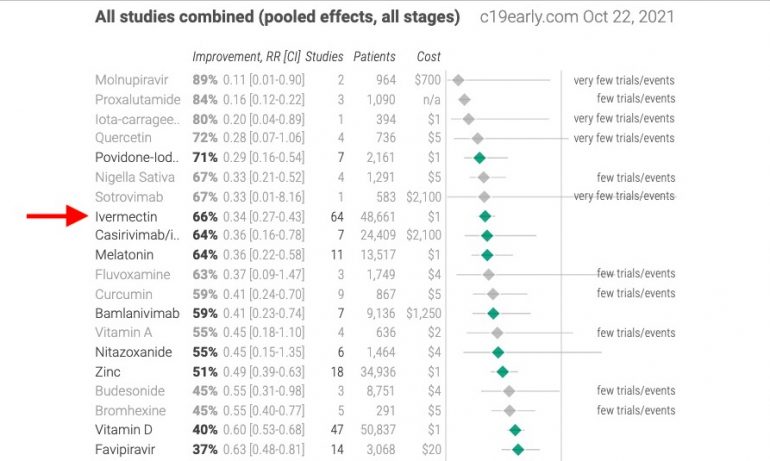 There’s another chart that shows where some of the repurposed drugs are being used.

While lies about treatment for the virus have been spread from the very beginning, what has happened with Ivermectin is just shocking and it’s not really going away.

This Nobel Prize-winning “miracle drug” has been successfully labeled a “horse dewormer” by the corporate media.

Even the FDA was in on the smear sharing half-truths about a drug that is used both for livestock and humans.

And the thing is… in real-world studies, it seems to work for some people.

But you’re not going to see the Corporate Media apologize or attempt to correct the record.

They’re just going to double down like CNN did after Dr. Gupta was confronted by Joe Rogan on the outright lies that the network told about him, and insist that it’s “not approved” even though it’s being studied by Texas Tech with funding provided by the NIH.

CNN’s @DonLemon: “It is not a lie to say that [Ivermectin] is used as a horse de-wormer. I think that’s important. And it is not approved for Covid.”@drsanjaygupta: “Correct … If you look at the data, there is no evidence that it really works [against Covid].” pic.twitter.com/eDpJUxrsqY

They won’t even raise the question, “What the heck did it take the NIH so long to look at therapeutics?”

Our media is broken.