For one thing, we know for certain that age and obesity are significant risk factors for serious illness and death from the China Virus.

But you’re not allowed to say that.

The latest shameless push to vaccinate everyone regardless of natural immunity or age is brought to you by the Orwellian-named Saskatchewan Health Authority (SHA) in the vast, commie-friendly wasteland of Canada. In a stunning tweet, the SHA denied the known science about SARS-CoV-2 to shill for Big Pharma.

The tweet heard ’round the world states, “Your risk from COVID-19 is not determined by age, fitness level or community…your risk is determined by vaccine status. ~78% of all new cases & hospitalizations in #Sask in Sep were unvaccinated or partially vaccinated people.”

Your risk from COVID-19 is not determined by age, fitness level or community…your risk is determined by vaccine status. ~78% of all new cases & hospitalizations in #Sask in Sep were unvaccinated or partially vaccinated people. https://t.co/T0HXlmCUZs 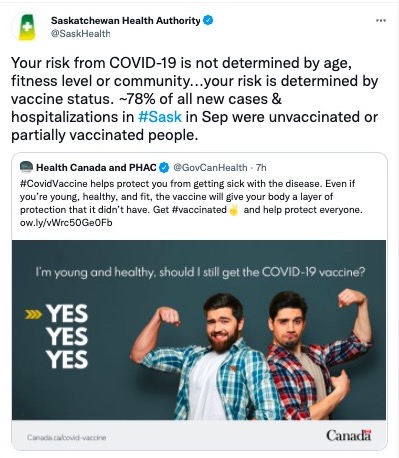 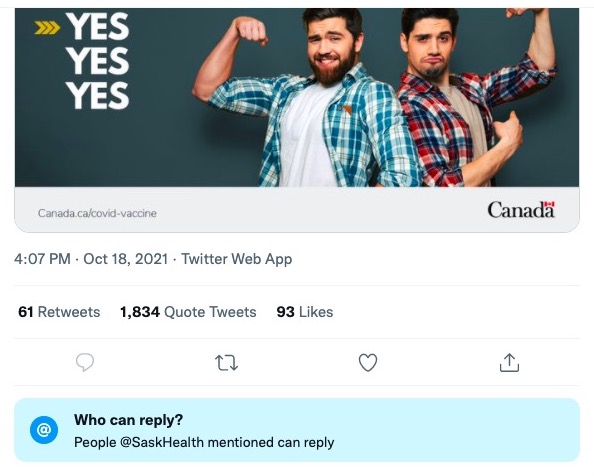 The thing is, even their own data shows that age is a significant factor.

The Saskatchewan government’s website has a chart that shows that the vast majority of death has been people age 60 and up, and it’s not even close.

Clearly, they knew how asinine this tweet was and that it would face a tremendous amount of backlash, so they turned off the comments… and that’s when Twitter users decided to share the hell out of the thing.

In less than 24 hours, the tweet had been retweeted over 3,100 times — pretty much all of them calling Saskatchewan Public Health the clowns that they are.

Many were calling out Twitter for not censoring the  “COVID disinformation.” 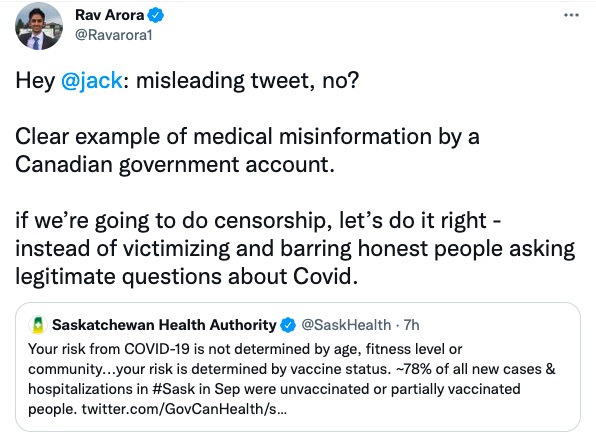 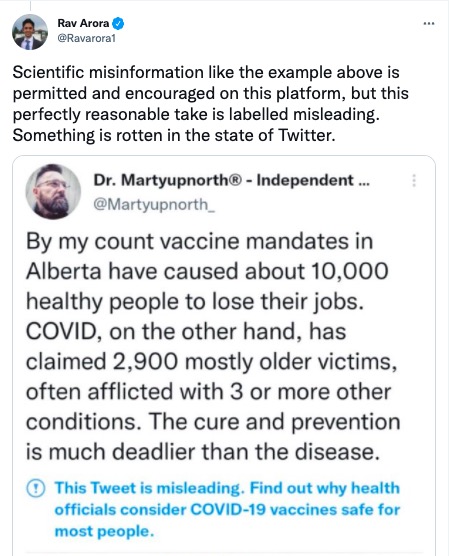 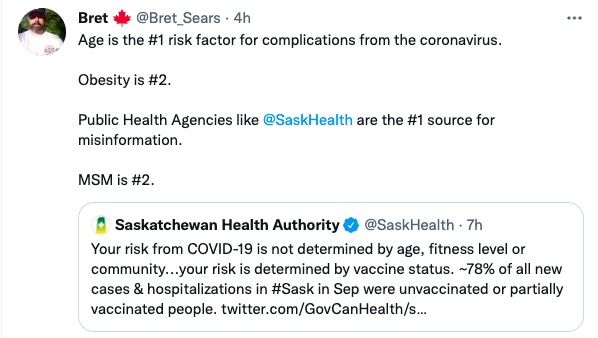 Until recently, Saskatchewan, one of Canada’s prairie provinces, was solidly right-leaning and handling the pandemic in a way that balanced public health and individual liberty. Now, they’ve gone all-in on terrorizing the approximately 1.2 million residents in the sparsely-populated province.

An indoor mask mandate was instituted on September 17, and proof of vaccination or a negative COVID test is required for all provincial government employees as of October 1, as well as for anyone 12 and up who wants to access indoor public spaces such as restaurants, gyms, concert halls, and theaters. There is no broad mandate (yet) but the province is encouraging private businesses to require proof of vax for their employees.

To show you just how asinine these restrictions are, you need to get a vaccine for the China Virus in order to be able to go inside the liquor store and weed shops. I guess they’re just trying to normalize imbibing escapist substances to numb the reality that you’re being controlled… kinda like the way that soma is used in Aldous Huxley’s “Brave New World.”

Speaking of the signs of prescient dystopian fiction…

Earlier this month, Saskatchewan Public Health announced that they’re recruiting former police officers to enforce pandemic restrictions because they expect a spike in cases due to the upcoming fall and winter holidays. Canadian Thanksgiving was on October 10.

“We are really concerned that Thanksgiving … is really going to be another very bad accelerant to an already bad situation,” said Dr. Johnmark Opondo, a medical health officer with the Saskatchewan Health Authority, adding that the province is already deep into its fourth wave.

During his presentation, Opondo also shared news about the province’s offensive strategy against COVID-19.

The team is “a group of retired police officers who are really going to assist us, particularly where we are short in terms of public health inspectors,” he said.

Ezra Levant, a lawyer and the founder of Rebel News, had a perfect tweet about this:

"They refer to those sent to the secure isolation site as clients, not detainees. However they will be there under a detention order."

If that’s not enough, SHA is also promoting *checks notes* snitching on neighbors and the reestablishment of a “secure isolation site” in the province.

Opondo also noted the province has a website where people can fill out a form to inform officials about people allegedly not following the public health orders.

In addition to the enforcement team, the health authority is also preparing to revive a “secure isolation site” at Saskatchewan Hospital in North Battleford, Opondo said…

… The site is specifically for individuals who wilfully fail to comply with isolation orders to prevent the spread of COVID-19 while contagious, says Christopher Clemett, the agency’s acting executive director of enterprise projects and external relations

The site is being re-established “to ensure that individuals who are required to self-isolate, but who fail to or are unable to, follow the direction of a medical health officer,” Clemett said.
Source: CBC News

But then, The Science™ seems to be rather elusive to the folks over at the Saskatchewan Health Authority. An interesting little tidbit picked up while writing this article is that the province is now issuing a second booster jab. Yep, that’s right, they’re already on Jab #4. 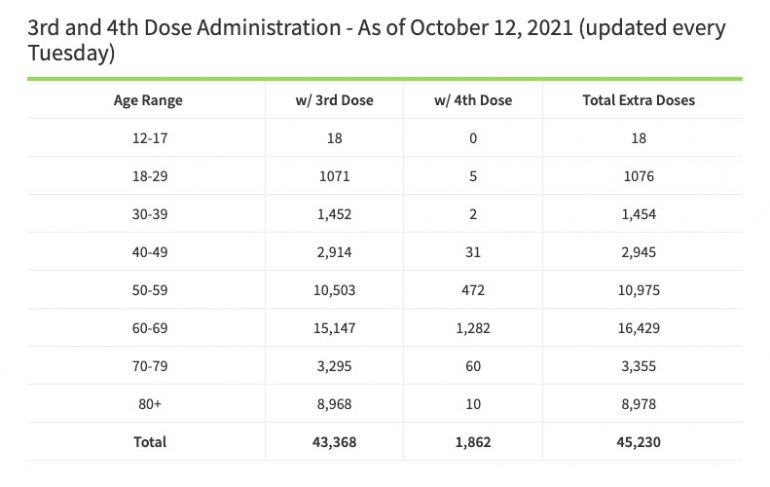 What the heck happened, Saskatchewan?! Who broke you?