The Biden administration has been assuring us that inflation is not a problem.

First, inflation wasn’t actually happening. Then it was transitory. Then it was evidence of a strong economic recovery.

That line of reasoning was what they told us before these October numbers came out. Looks like they’re going to need a new yarn to spin for us.

Prices for U.S. consumers jumped 6.2% in October compared with a year earlier as surging costs for food, gas and housing left Americans grappling with the highest inflation rate since 1990.

The year-over-year increase in the consumer price index exceeded the 5.4% rise in September, the Labor Department reported Wednesday. From September to October, prices jumped 0.9%, the highest month-over-month increase since June.

Inflation is eroding the strong gains in wages and salaries that have flowed to America’s workers in recent months, creating political headaches for the Biden administration and congressional Democrats and intensifying pressure on the Federal Reserve as it considers how fast to withdraw its efforts to boost the economy.

…Excluding the volatile food and energy categories, so-called core prices rose 0.6% in from September to October. Core prices are now up 4.6% compared with a year ago.– NewsMax

If you think it’s bad now, just wait until people (and companies) really start feeling the sting of these pricing changes. It’s too early to assume that inflation won’t continue to compound.

Why is this news relevant now? Because we’re one year out from critical midterm elections, and there will be plenty of time for the public to learn what it’s really like to suffer the real-world effects of the inflation that’s being generated.

The last time we saw this kind of inflation, Dubya’s dad was President.

After that, some guy named Bill ran his Presidential campaign. And what was the most memorable line of that campaign? 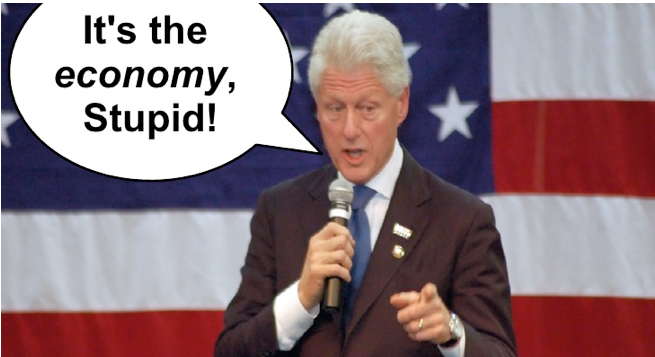 If you collect Trump memorabilia then you must get, The Art of Joe: The Political Brilliance of President Biden. Your friends will pee they’ll laugh so hard. The chapter, Notable Quotable Joe should be read aloud at MAGA parties from coast-to-coast. BTW, the book is 95% bereft of any content. Just like Biden’s head.