On Wednesday, Dr. Richard Ebright, Professor at Rutgers University, tweeted a link to an exclusive article from The Daily Caller News Foundation (DCFN) about the NIAID flagging possible funding of gain-of-function research through a grant to EcoHealth Alliance back in May 2016. Ebright posted a short thread with some of the content of the article.

In his thread, he said that the NIAID staffers were concerned that the research through EcoHealth at the Wuhan Institute of Virology was gain-of-function, but dropped the issue when EcoHealth downplayed it.

Here’s the letter from the NIAID to Daszak saying that they had determined that gain-of-function research was being conducted by his organization and funding would be paused. 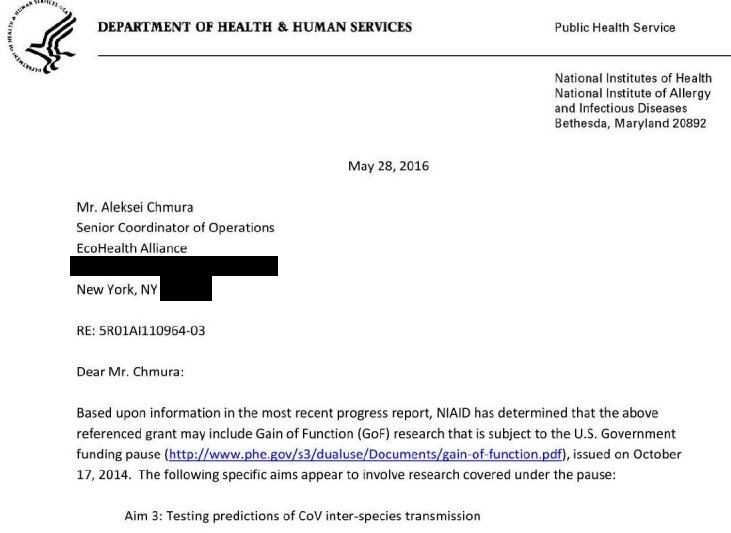 The NIAID then allowed Daszak to file an amendment to his letter dated June 26 after they found a factual error in it and used that second letter to determine that there was no gain-of-function research being conducted.

In a letter to EcoHealth, two NIAID staffers wrote, “NIAID is in agreement that the work proposed under Aim 3 to generate MERS-like or SARS-like chimeric coronaviruses (CoVs) is not subject to the GoF funding pause. The Daily Caller adds that the NIAID “did not expect that EcoHealth’s chimeric lab-created viruses would exhibit enhanced pathogenicity in mammals and that Daszak had promised to immediately stop all experiments and notify the NIAID if EcoHealth created a virus in Wuhan with enhanced virus growth over one log.”

But we now know that EcoHealth didn’t report that:

Peter Daszak was thrilled with the NIAID giving the green light to the funding and accepting EcoHealth’s definition of gain-of-function. He responded to the NIAID staffers, Erik Stemmy and Jenny Greer, four days later with an email stating, “This is terrific! We are very happy to hear that our Gain of Function research pause has been lifted.” 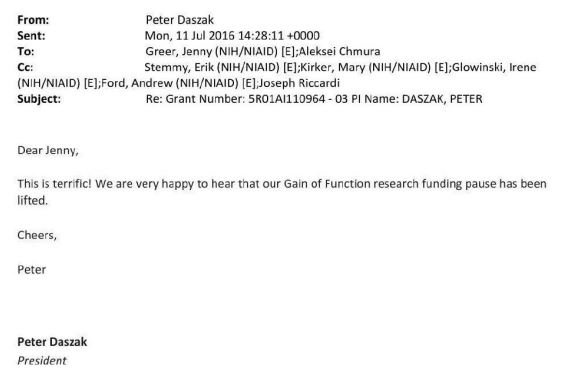 “National Institutes of Allergies and Infectious Disease staffers Jenny Greer and Erik Stemmy told EcoHealth in a May 28, 2016, letter that a proposed grant ‘may include’ gain of function research, according to documents obtained through..information request.”

Dr. Ebright spoke to the Daily Caller (DCFN) about the NIAID letter and Daszak’s response and what that means for Fauci’s repeated denials about funding gain-of-function research.

Rutgers University Professor Richard Ebright told the DCNF that the NIAID’s May 28, 2016, letter to EcoHealth proves that Fauci was “untruthful in his testimony to Congress” that NIH staff concluded up and down the line that the EcoHealth grant did not include gain of function research…

…Daszak’s letter to the NIAID on June 8, 2016, argued that EcoHealth’s proposed experiments in Wuhan were not gain of function in part because the WIV1 bat coronavirus they planned to use as the basis of their lab-made viruses “has never been demonstrated to infect humans or cause human disease.”

But Daszak’s collaborator at UNC Chapel Hill, Ralph Baric, helped publish a study three months prior in March 2016 that found WIV1 had the ability to infect humans. Baric’s study found that the WIV1 virus posed an “ongoing threat” to humans because it “readily replicated efficiently in human airway cultures and in vivo, suggesting capability of direct transmission to humans.”

Daszak also said in his June 8, 2016, letter to the NIAID that he would cease experimentation and notify the agency immediately if EcoHealth’s lab-created viruses in Wuhan were enhanced by over one log, or ten times, compared to the natural strain used to construct it.
Source: The Daily Caller

In a June 28, 2016 email, Daszak explained that he was reliant on reports by Wuhan scientist and bat virus researcher, Shi Zhengli, who has known ties to the Chinese military. 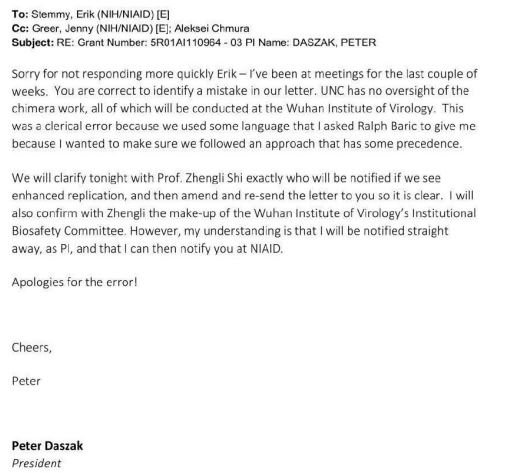 Let’s not forget that Daszak was one of the members of the World Health Organization’s panel that went to China to investigate the origins of the coronavirus, and thanked Dr. Fauci for dismissing the lab leak theory.

Back in September, the New York Post’s Miranda Devine wrote about why many people simply don’t believe Dr. Fauci when he insists that the NIH/NIAID didn’t fund any gain of function research in China.

Devine mentions Fauci’s history of prevarication but also digs into the grants from the NIH given to EcoHealth for research on coronaviruses.

In the grant proposal, for which EcoHealth Alliance was given $3.1 million from 2014 to 2019, Daszak wrote that the Wuhan scientists would conduct “virus infection experiments in cell culture and humanized mice” and look for “spillover” from bats to humans.

“We will do this by sequencing the spike protein genes from all our bat-[coronaviruses], creating mutants … We will also induce site mutations in S proteins.”

Tinkering with a virus in the lab to make it more infectious to ­humans is the very definition of “gain-of-function” research, as stated by the US Department of Health and Human Services: “Research that improves the ability of a pathogen to cause disease.”

Fauci insisted before Congress in May and again in July that the National Institutes of Health never funded this sort of research. But, regardless of how Fauci personally defines the term “gain of function,” the upshot is that the Frankenstein research conducted in Wuhan with American money has been fingered as the most likely source of the virus that has killed millions of people.

Now, try to square all of that with what Dr. Fauci said in his most recent clash with Senator Rand Paul (R-KY) on Thursday:

Senator Paul has said that gain-of-function research on bat coronaviruses conducted at the Wuhan Institute of Virology specifically using spike proteins seems rather suspicious when it has been determined that Wuhan was “ground zero” for the pandemic.

He did not say that any NIAID research grant to EcoHealth Alliance created the SARS-CoV-2 virus, but Fauci continues to react to his statements that way.

It’s a ridiculous assertion that Fauci is making since EcoHealth, the Wuhan Institute of Virology, and the Chinese Communist Party are probably not stupid enough to admit that they caused the pandemic that would make them liable for millions of deaths around the world. Besides, early samples and data were all destroyed, so it would be impossible to prove at this point.

Senator Paul and Dr. Fauci continue to clash on exactly what is considered “gain-of-function” and what isn’t.

In an interesting tidbit gleaned from CNN’s Dr. Sanjay Gupta when Joe Rogan took him to the woodshed over the “ivermectin is horse dewormer” debacle, is that “gain-of-function” doesn’t apply to new viruses.

Senator Paul says it’s gain-of-function to screw around with any virus, known or unknown, and Dr. Fauci insists that gain-of-function research is limited to increasing the pathogenicity of known viruses.

Therein lies the crux of the issue.

Chinese scientists were looking for new viruses in bat caves, brought them to Wuhan, then were stitching them together to create FrankenViruses.

Devine’s NY Post article also explains why Americans can’t get any answers on how it is that taxpayer funds were used for these dangerous experiments.

A couple of the alphabet agencies in Washington wanted to use EcoHealth to “collect intelligence” on what was happening in labs in China.

Fauci’s outfit at the National Institutes of Health gave a total of $14 million to Daszak in various grants. But by far the largest donor to EcoHealth was the Department of Defense, which has given Daszak more than $40 million since 2014, almost all of it through its Defense Threat Reduction Agency, for the stated purpose of “combating weapons of mass destruction,” and most of it since 2017.

A former EcoHealth employee says Daszak disclosed some years ago that he had been “approached by the CIA in late 2015.”

The employee believed that the CIA helped steer large chunks of federal funding to EcoHealth’s projects in parts of the world like China where they needed “human intelligence related to biological threats and capabilities. Many of these places are hard to collect good intelligence … Also, [the Department of Defense] was actively always asking for data, models, and analysis.”

If the intelligence community knew about the dangerous research going on at Wuhan and was directing funding to it through Daszak, then it is complicit in a coverup over COVID-19.
Source: New York Post(Emphasis Added)

Eric Weinstein, who was one of the founding members of the “intellectual dark web” — a politically diverse group of heterodox thinkers who were focused on free speech and opposing political correctness — had some thoughts on what Ebright’s discovery meant, and Dr. Ebright responded.

Within two years. (After the coming midterm elections and change in control of the House, the Senate, or both…at which point, real hearings, with real subpoenas, and with real testimony under oath, will commence.)

That would only happen if Republicans can take back the House of Representatives in 2022, and hopefully the Senate as well.

That means that Americans need to get out there and do whatever they can to bring on a “red wave” in 2022.