Forrest Gump may be the character famous for saying ‘I’m not a smart man.’ But it’s every bit as true of the prosecution that tried to indict Rittenhouse.

Not only was he publicly humiliated by a judge for violating the Constitutional rights of the defendant by commenting on his post-arrest silence, not only did he demonstrate himself to be an absolute ass again and again (and again!) in the courtroom, with plenty of plausible evidence of corruption as a cherry on top, but now he has gone and done something almost as recklessly stupid as pointing a rifle at the jury.

He can’t claim ignorance, either, since it’s the exact thing he personally said he would be ethically forbidden to do. He made public comment on the guilt or innocence of a fully-acquitted defendant.

Those who followed Rekieta Law’s live-streamed legal commentary walking us through the Rittenhouse trial in real time will already know the name Darth Crypto. He made an appearance, for instance, in this story: Prosecutors In Rittenhouse Trial HELD BACK Hi-Def Video From Defense — Motion To Dismiss Has Been Filed

While the rest of the world has begun to move on [much like they dropped the racially-motivated(?) Christmas Parade Massacre], Darth Crypto is still following developments among the participants. And he just gave us a doozy.

DA Binger told the Chicago Tribune that #Rittenhouse’s not guilty verdict isn’t the same as being innocent.

While the terms may be different in the context of American jurisprudence, it’s extremely unethical & prejudicial to the public given the prospect for civil litigation. pic.twitter.com/ytpHj9A4XU

This was first noticed by @bevo_fox, who has done exceptional work helping myself and others with the #Rittenhouse case.

He’s also created video breakdowns of the #WaukeshaMassacre and the #ChadRead shooting will be coming I’m sure!

Here’s a better look at the text he’s citing. 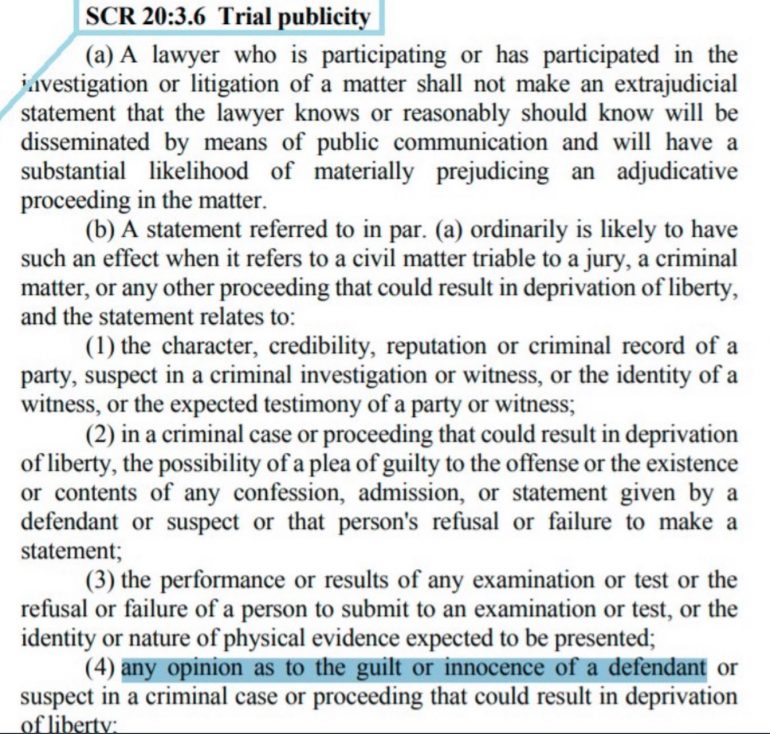 It’s looking like Binger really does hate Kyle with the heat of a thousand suns, and is going out of his way to destroy him.

It’s fairly apparent that Kyle’s lawyers have been (at minimum) discussing defamation suits. Is breaking with ethical norms of the legal profession simply to frame Rittenhouse as ‘not innocent’ really worth putting himself in the same jeopardy that certain media personalities and federal politicians might already be facing?

You’d think a credentialed lawyer would understand that ‘innocence’ is the default state of any American Citizen unless and until he is found otherwise in a court of law.

Last we checked, Binger did a pretty spectacular job of failing to prove even a single charge against his defendant. Because of that Kyle retains his presumption of innocence… no matter HOW Binger may try to undermine it by splitting hairs.

Should Binger be disbarred?

It’s not my call to make. But if nothing else, those to whom Binger reports should demand serious answers to some hard questions about what the absolute HELL got into Binger’s head though this gong-show of a trial, and now… beyond the trial to the time that followed.

Would many of us who see him as evidence of a corrupt system like to see him disbarred?. That one we can answer with a hearty ‘Hell Yeah’.