NARRATOR: Reid is not woman enough.

MSNBC’s Joy Reid has got a veritable buffet of hot-takes, but they’re all made with the same ingredient — race-baiting.

It’s almost masterful how she can so shallowly inject race into every single issue:

In any police shooting incident that makes the news, you can count on Joy Reid to immediately spit out that cops are racist.

When she talks about the pandemic, she focuses on racial disparities.

And of course, Glenn Youngkin is some sort of crypto white supremacist according to Reid.

The “Race Lady over at MSNBC” as Tucker calls her, thinks that parents in Virginia that voted for Youngkin because of his stance on education was “code” for “white parents” who don’t want race taught in schools. It wasn’t because Virginia kept schools closed longer than most in the country and parents were finally seeing what was going on in the classroom and didn’t like it.

She does this with literally every issue. It’s amazing she didn’t trot that one out when she lied claiming her blog was “hacked” after screenshots of what the left calls “homophobic statements” were posted online.

That’s why her statements on Tuesday night about the Republican Party weren’t much of a surprise.

“You have to be willing to vocalize that these Republicans are dangerous,” said Reid. “That this isn’t a party that’s just another party that disagrees with us on tax policy. That at this point — they’re dangerous. They’re dangerous to our national security. Because stoking that kind of soft white nationalism eventually leads to the hardcore stuff.”

Maybe Joy Reid simply isn’t aware that the current Democrat Governor and Attorney General have both admitted to wearing blackface in the past… but that seems unlikely. No, it’s those “racist dog-whistles” of “parents rights” in education that only Libs can seem to hear that are the problem, right Joy?

The newly-elected Jamaican-born Lieutenant Governor of the Commonwealth of Virginia took exception to Reid’s comments about the GOP.

“I wish Joy Reid would invite me on her show,” said Sears. “Let’s see if she’s woman enough to do that, I’d go in a heartbeat. And we’d have a real discussion without Joy speaking about me behind my back, if you will.”

She continued blasting Reid for the race-baiting.

“She talks about white supremacy. Does she know that I ran against a white supremacist? I mean Joy, come on, get your facts straight, and then come talk to me.”

Sears said that race is a tool that is being weaponized to divide Americans and it needs to stop. “It just continues to divide us. And unfortunately, politicians are using it as a tool, because of the things that have happened to us historically, to advance, I would think, their nefarious purposes. And so if we stop just looking at race and just looking at people—because you see, I’m destroying all the narratives about race.”

She continued by saying that she’s an example to show that the race-baiters like Reid ar wrong, “Look at me, look at me, I am a heartbeat away from the governorship in case anything happens to the governor, and how are you going to tell me that I’m a victim. And I didn’t do anything special to get here. Except stay in school and study,” said Sears. “I took advantage of the opportunities that are available here in America. I wasn’t born here. This is not my culture, not my country. But it allowed me America allowed me to come and do for myself and for my family.”

Sears said that she worked hard to get where she is, “I remember when I was wanting to go to college, I had three children under five, my husband took a lower-paying job so he could stay home because he already had his degree. And I put one of my children on the back of a bicycle so that I could get to college. So nobody can say to me I don’t know what it is to be poor. You’re looking at the American dream. So we can do better.”

Well, that would certainly be interesting television.

While we're at it, let's make it a panel and invite @jemelehill to join in some thoughtful dialogue! https://t.co/Fs5t3uGaxX

It might have been something that Jemele Hill had said…

Reid and Hill shouldn’t be surprised. Sears is not some sort of shrinking violet.

Look at one of her campaign signs:

In her acceptance speech on Tuesday, Winsome Sears spoke about how there are some people bizarrely that think that the United States is still stuck in the early part of the Civil Rights movement after having elected a Black President for two terms.

“I say to you, there are some who want to divide us and we must not let that happen,” she said. “They would like us to believe we are back in 1963, when my father came. We can live where we want, we can eat where we want, we own the water fountains. We have had a black president elected not once but twice and here I am living proof. In case you haven’t noticed, I am black and I have been black all my life.”

“But that’s not what this is about, what we are going to do is we are going to now be about the business of the Commonwealth,” she continued. “We have things to tend to, we are going to fully fund our historically black colleges and universities. You’re gonna hear from your governor-elect Glenn Younkin. And he’s got a day one plan that I’m already tired about, I don’t know how we’re gonna make it to day two. But he’s going to make sure we keep more of our money in our pockets because he’s going to get rid of all kinds of taxes. We’re gonna have safer neighborhoods, safer communities, and our children are going to get a good education because education lifted my father out of poverty, education lifted me out of poverty, education will lift us all out of poverty because we must have marketable skills so that our children can not just survive, but they will thrive, and they will create generational wealth. That’s what this is about.”

Here’s her full speech from Tuesday:

"Education will lift us all out of poverty."

Lt. Governor-elect of Virginia Winsome Spears: "We're going to have safer neighborhoods, safer communities, and our children are going to get a good education." #VoteForAmerica2021. pic.twitter.com/81yZu9NtrV

Sears campaigned on not dividing by race, but looking at a person as a whole and voting your values.

Every day, white progressives tell people of color we can only think, act, and vote one way: their way.

I've made the choice to think for myself and leave the Democratic party behind.

Join me and let's bring about real change for Virginia.https://t.co/XZtWMSEEfS pic.twitter.com/XoxrsuQ0Wp

She was hoping to grow the GOP base in Virginia:

LIVE – New episode of "It’s Bigger Than You Think" with Virginia’s Republican nominee for lieutenant governor @WinsomeSears is available wherever you stream your podcasts.

Check it out – we’re 6 days from Election Day! pic.twitter.com/CEuiZ8ODHB

I don’t know about you, but I really like this lady!

How it started. How it’s going. ?? pic.twitter.com/2EUdbxm5eL

Speaking of memes, one was floating around Twitter about what would happen if Joy Reid had the chutzpah to actually invite Winsome Sears onto her show… 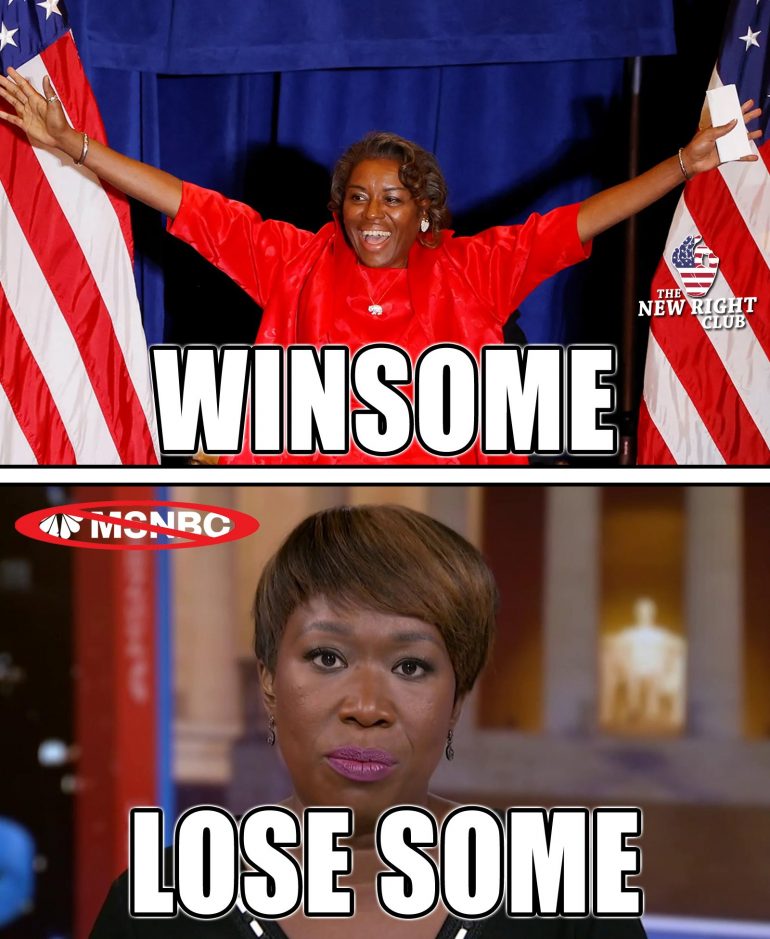