After this testimony, the question is no longer “Is this self-defense?” but “How the heck did this ever get to trial?”

Gaige Grosskreutz was the man that was shot in the arm by Kyle Rittenhouse during the Kenosha riots in August 2020.

Here is video of Grosskreutz immediately after he was shot. (WARNING: GRAPHIC)

Here’s video of the man’s wounds, I recorded him being shot in Kenosha. His right arm is badly damaged. Credit: @ louriealex (instagram) pic.twitter.com/iE8vUG27mb

The prosecution is trying to make Grosskreutz into a credible and sympathetic witness by highlighting that he is an EMT and was afraid that he feared for his life.

“I thought I was going to die.”

After the testimony of #GaigeGrosskreutz, do you believe the defense’s claim that Rittenhouse shot Grosskreutz is self-defense?

Unfortunately for the prosecution, Grosskreutz was under oath and would be cross-examined.

According to National File, Grosskreutz is a convicted burglar and has “affiliation” with communist groups.

Gaige Grosskreutz DENIES being a member of local Communist groups — but ADMITS affiliation, speaking at one of their rallies.

As noted earlier, Grosskreutz was armed but his permit to carry his gun had expired.

Gaige Grosskreutz, who was shot in the arm by #Rittenhouse, is asked if I he had a permit to carry the firearm he had when he rushed toward the teen. “I did,” he responds. He is asked if the permit was actually valid.

“It was not,” he answers. #Kenosha pic.twitter.com/honc2xnA9F

Under cross-examination, Grosskreutz admits that Rittenhouse didn’t fire until he approached and pointed his handgun at him.

He also admitted that he pulled out his gun to protect his own life.

Grosskreutz effectively just admitted he wanted to kill Kyle to save his own life. Thus confirming Kyle‘s self-defence privilege. I think he also forgot about the Facebook post… pic.twitter.com/4GteKAfH2S

While Grosskreutz continues to say that he’s a loving, wonderful person who would never take a life, there’s this small issue of a Facebook post that says otherwise…

After Grosskreutz was shot in the arm, a friend of his posted a photo to Facebook, and in the comment thread, wrote, “I just talked to Gaige Grosskreutz toohis[sic] only regret was not killing the kid and hesitating to pull the gun before emptying the entire mag into him.” 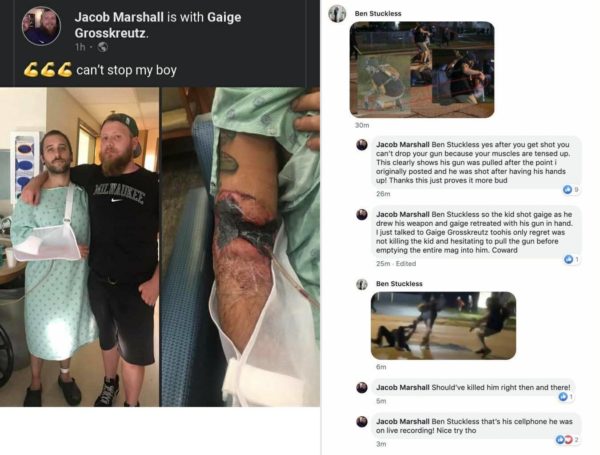 Grosskreutz then admits that he was advancing with his gun pointed at Kyle Rittenhouse — who had just been attacked with a skateboard and had a crowd going after him — when he was shot.

Rittenhouse trial should be over immediately. pic.twitter.com/PHZnHS5rD9

Rittenhouse prosecution after witness Grosskreutz admits he only got shot after he drew his gun on Kyle and advanced on him pic.twitter.com/yvzeowUzF3

Grosskreutz has a financial interest in the testimony — he has a lawsuit against the city and county of Kenosha, Wisconsin for $10 million.

??Gaige Grosskreutz FAILED to mention in both the Kenosha suit and in federal court filings that he had a firearm on him when shot by Rittenhouse pic.twitter.com/oCxnPv2yVI

Looks like Grosskreutz has 10 million reasons to get Rittenhouse convicted. And that smirk at the end? A smirk of deceit. pic.twitter.com/iwY1CujfFO

If that’s not damning enough, footage that was filmed by Grosskreutz shows that after the shooting of Rosenbaum, Rittenhouse was heading toward the police.

“I’m going to the police” Kyle Rittenhouse is heard saying

further supporting that Kyle was not on the offensive but trying to surrender when they attacked himpic.twitter.com/l7S0UW486P

Several conservative journalists including Human Events senior editor and podcast host Jack Posobiec, videographer for Townhall.com Julio Rosas, and New York Post journalist Eddie Scarry, were live-tweeting during the trial and showed just how awful Grosskreutz is as a witness.

Gaige Grosskreutz admits he saw the mob attacking Kyle, and that he drew his Glock as he approached Kyle

Kyle Rittenhouse did not point his rifle at Gaige Grosskreutz while his hands were up. Simply not true. Gaige Grosskreutz’ testimony is not supported by the evidence pic.twitter.com/qPWPvP9lBg

Grosskreutz said it is not true to say he chased after Rittenhouse. The defense then showed Grosskreutz this picture of him grabbing his handgun while running towards Rittenhouse. pic.twitter.com/b52dtDWvpG

Gaige now admits that was a lie.

He told police Kyle racked the rifle and then shot him.

He did not tell police he pointed a Glock at Kyle.

Yes, Gaige Grosskreutz is this much of an idiot pic.twitter.com/ASrak9BKZx

???: The defense just noted Jacob Marshall, who posted on Facebook about Grosskreutz wanting to empty the “entire mag” into Rittenhouse, was in the courtroom but is now gone after being served a subpoena. Judge says they need to find out where Marshall is. pic.twitter.com/mhRfs1k3SC

Grosskreutz just testified that he did not say what’s in this post, as relayed by a roommate/friend. https://t.co/g6XYsn654p

On Thursday, Richie McGinnis, a videographer for The Daily Caller, was a witness for both the prosecution and the defense, but he completely dismantled the prosecution’s case.

Here is the prosecutor questioning McGinnis:

This is the prosecution’s star witness.

The judge must immediately dismiss the charges against Rittenhouse with prejudice, then sanction the prosecution and refer their conduct to the state Bar for even bringing this case.pic.twitter.com/iH4mJiTwxm

Richie McGinniss, chief video director at conservative website the Daily Caller and a critical witness in the trial of Kyle Rittenhouse, said one of the men shot during protests in Wisconsin cursed and lunged for the defendant’s military-style rifle https://t.co/PsBcnxV0oB pic.twitter.com/5xDVMvdK5n

It’s important to note that Richie McGinnis was so close that he was the man who pulled his shirt off and tried to give medical assistance to Joseph Rosenbaum, the first man shot by Rittenhouse. Rosenbaum had threatened the group that Rittenhouse was with saying that if he got one of them alone, he would kill them. Rosenbaum was shot after he chased Rittenhouse.

This really looks like an open and shut case of self-defense. It seems like it made it to trial solely due to political reasons.