The Panic-mongers will NOT want this story to see wide publication. It would totally undercut the fear narrative AND the logic behind the mandate.

In light of places like Israel and the UK indicating the comparative strength of natural post-infection immunity being even better than any artificial immunity provided by ‘the jab’, the following story should be of great interest to anyone whose interest in the Wuhan China virus is more scientific than political.

The CDC has (finally!) released numbers for how many people have gotten sick and then recovered and just as everyone could have figured out from the basic facts on hand about cases reported minus total death claims, that total number of survivors is very, very high.

Why is that number of survivors so important to us? Because it provided the rest of the picture that the panic-mongers keep leaving out of the conversation as they work so hard to drive wedges in society, creating an us-versus-them dynamic with those who are not vaccinated as the dangerous, bad, or dirty people who need to be ostracized or punished.

Why do they ‘need’ to be punished? It’s for the great ‘crime’ of being non-compliant to government and employer demands to take a series of injections whose long-term effects are as yet untested, and whose efficacy is so profound that, less than a year after the injections are delivered, that some people have already adjusted their definitions of ‘fully vaccinated’ to mean a ‘booster’ shot.

Now that the CDC has released some of the numbers we could previously only have guessed at, we have a more complete data set from which to draw informed conclusions.

Two charts in particular from the link above catch our eye.

One shows the raw figures of just how many Americans have already faced COVID, recovered, and put it behind them. The other puts the real risks into a persepctive that the panic mongers have been desperately trying to keep out of the public conversation.

Here’s the risk as broken down by age group.

Although people under the age of 65 account for 90 percent of the cases they only account for 20% of the deaths.

That fact comes into even sharper focus when you move the dividing line to age fifty. If you are fifty-plus, you account for only 27% of the total cases, but 95% of the total deaths.

Flipping those numbers, even though the supposedly ‘reckless’ under-fifty crowd accounts for 73% (almost 3/4) of the total cases, they account for only 5% of the total deaths.

That, strictly speaking, is the science. In other words, it is data.

What we DO with that data once we have it takes us to the realm of policy and politics. Interpretation and application are human activities filtered through all the good and bad qualities humanity is capable of… from altruism, and chasing the truth, to fear, greed or corruption.

If you are under fifty, and in reasonable health, it’s getting harder to make the case that COVID is super-scary. Because so many folks have survived it.

Statistically, millions of Americans have already survived it. Tens of millions have survived.  Dare we say hundreds of millions?

Well, we can go as far as to say roughly ‘one-and-a-half’ hundred million have gotten sick and recovered. 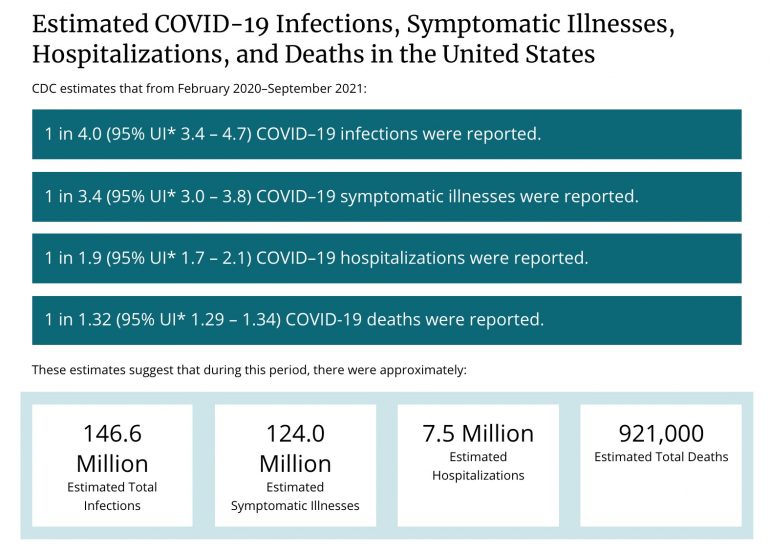 If we’re looking at a population of about 333,000,000 Americans, that’s about 44% of our total population who now have acquired some level of natural immunity.

That’ puts a whole different spin on the browbeating Joe Biden is giving us about how he is running out of patience, and how he has been lawlessly bullying businesses to ignore Court Rulings against his vaccine mandate, and proceed with them anyway.

Has Biden considered the possibility that the real reason so many of the work-a-day folks who were called ‘COVID heroes’ only a year ago is because they have already recovered from the virus, and see no way in which a vaccine can improve their situation at all?

Why risk any known side effects of a vaccine if you see no way in which that vaccine can make you ‘more immune’ than an actual brush with the real virus made you?

Speaking of vaccines mandates, ClashDaily recently ran a story mentioning that the Lancet published a peer-reviewed article describes the vaccine’s ‘minimal’ efficacy against transmission of the (now-dominant) Delta Variant of the virus. It also happens to mention the fact that CDC doesn’t have any evidence of, and isn’t bothering to track any data about, anyone with natural immunity transmitting the virus to others.

Why does any of that matter?

Leaving aside all the politicking we’ve seen in the last 2 years, vaccines have basically one job. They are an artificial way of training the immune system to recognize a dangerous virus so that if the immunized person meets that virus in the real world, they will not get sick, and they will not pass it on to anyone else.

While vaccines may have improved overall outcomes for certain at-risk populations, there are two important benchmarks they have not met. They have not prevented immunized people from getting sick, especially with the Delta Variant, nor have they prevented sick people from passing that infection along to others.

That leaves, for many, an unanswered question as to what the real benefits of getting this vaccination are… especially when almost half of all Americans have already had it.

The second we as a country look around and decide we are no longer at serious risk, the jig is up.