Think back to October 2020. The election hung in the balance, CNN had a COVID death clock, and labcoat authoritarians were entrenching their ability to micromanage our lives. And now this.

An email now reveals that the scientists who were running point on our pandemic response didn’t just ignore dissenting opinions, but they actively looked for ways to smear and discredit them as ‘fringe’ or cranks– even when it involved Nobel Laureats.

Because Fauci and Collins are far more serious scientists than any Nobel Laureate, right? After all, Fauci IS the science. He’s said so.

How exactly does someone like Fauci or Collins get to be the gatekeeper of a discipline whose very existence depends on conflict between dissenting ideas?

Simple. They do it by cheating and by colluding with powerful media and tech players.

The key dates to watch here as the story unfolds are the publishing of the Great Barrington Declaration on October 4, the email between Collins and Fauci on October 8th, and action taken by Google no more than 4 days later.

In October of 4 2020, a group of scientists came forward with ‘The Great Barrington Declaration‘, it’s a document written and now signed by a great number of well-qualified medical practitioners of various types and backgrounds as well as members of the public who agree with the premises therein.

Here’s a screenshot from the page as it appears today.

And a screenshot from that same page describing the original authors:

Harvard? Oxford? Stanford? And a Nobel Laureate as well? If this were an alarmist document pushing climate change, this would be cited in every major news source. But as with all Corporate News selective appeals to authority these days, dissenting voices are dismissed and squeezed out as ‘fringe’.

Serious scientists would face the claims made by rival schools of thought, put them to the test, and change or refine their own opinions based on the result of those studies. Unfortunately, Fauci and Collins are NOT serious scientists.

They had a far more ‘progressive’ way to defeat a rival school of thought. Wage a propaganda war to destroy the dissenters.

They would never do such a thing, would they?

Well, here’s a tweet by one of the authors of the GBD. 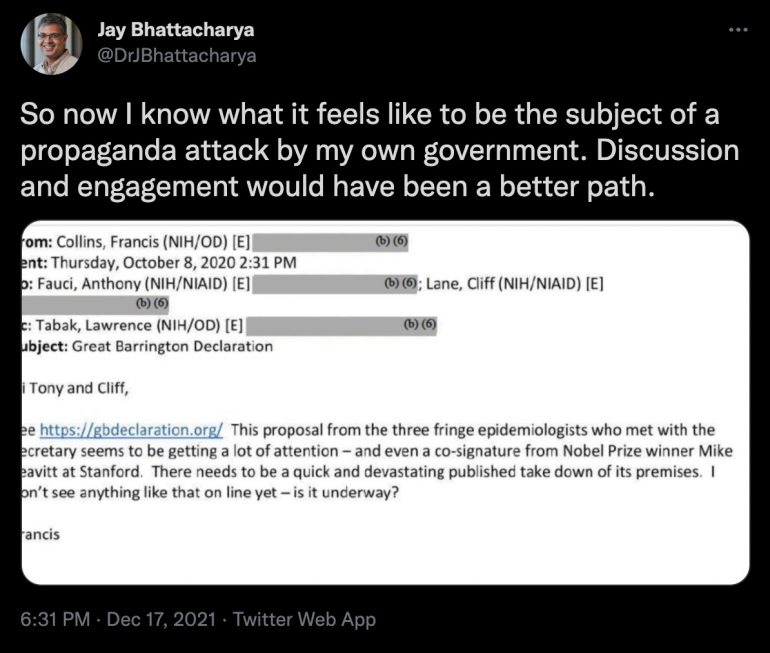 If you open up that tweet, you will find the following creepy email inside. Names are highlighted in red, the date in green, and we’ve brought attention to one especially jackbooted phrase in the body of the email itself.

[For proper context of what had him so worked up, we will include the full text of the document at the end of the article.]

It wasn’t underway yet, but Fauci obviously passed that message on to somebody and it was duly heard, understood, and acknowledged by ideological shock troops somewhere.

The GBD was published on October 4th. On the afternoon of the 8th, Collins and Fauci are plotting to take them down with extreme prejudice.

A websearch of GBD in that time period is quite telling. Aside from the site itself, and a Federalist article praising it, even my non-Google websearch turns up mostly negative hits on the topic… including some doozies.

The Guardian (Left wing, UK) wasted no time at all writing a hit piece the next day. 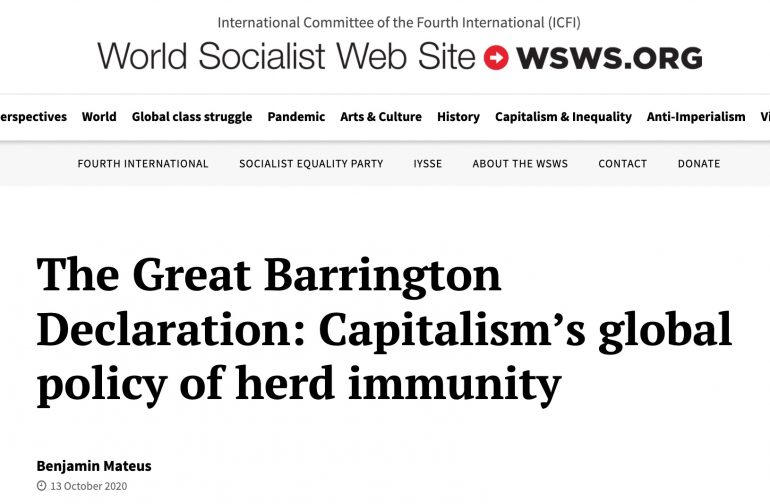 And this last one, dated October 12, and noticing that Google had (already!) been ‘disappearing’ the Great Barrington Declaration seems like kind of a big deal for anyone thinking that Section 230 does NOT need to be revoked…

When people talk about a ‘deep state’, they don’t have to mean some nefarious secret club. Unaccountable people with politically-aligned interests who short-circuit the normal safeguards of public oversight and accountability can be every bit as dangerous and nefarious.

Especially when they are arrogant enough to think they know what’s in our own best interests better than we do… and have a LOT to lose if they are ever shown the door.

The real irony here is, with current strategies to ‘shut down the virus, not the economy™’, failing, even foreign leaders are coming to grips with the reality that COVID will be with us for a long time (forever?) and we’ll have to learn to live with it.

And that’s essentially what the GBD (which predated the vaccine announcements) prescribed in abandoning the default approach of societal lockdowns of the healthy and turning attention to protecting the most vulnerable among us until the more dangerous strains of the virus basically burn themselves out.

(Full text of the declaration found below)

Coming from both the left and right, and around the world, we have devoted our careers to protecting people. Current lockdown policies are producing devastating effects on short and long-term public health. The results (to name a few) include lower childhood vaccination rates, worsening cardiovascular disease outcomes, fewer cancer screenings and deteriorating mental health – leading to greater excess mortality in years to come, with the working class and younger members of society carrying the heaviest burden. Keeping students out of school is a grave injustice.

Keeping these measures in place until a vaccine is available will cause irreparable damage, with the underprivileged disproportionately harmed.

Fortunately, our understanding of the virus is growing. We know that vulnerability to death from COVID-19 is more than a thousand-fold higher in the old and infirm than the young. Indeed, for children, COVID-19 is less dangerous than many other harms, including influenza.

As immunity builds in the population, the risk of infection to all – including the vulnerable – falls. We know that all populations will eventually reach herd immunity – i.e. the point at which the rate of new infections is stable – and that this can be assisted by (but is not dependent upon) a vaccine. Our goal should therefore be to minimize mortality and social harm until we reach herd immunity.

The most compassionate approach that balances the risks and benefits of reaching herd immunity, is to allow those who are at minimal risk of death to live their lives normally to build up immunity to the virus through natural infection, while better protecting those who are at highest risk. We call this Focused Protection.

Adopting measures to protect the vulnerable should be the central aim of public health responses to COVID-19. By way of example, nursing homes should use staff with acquired immunity and perform frequent testing of other staff and all visitors. Staff rotation should be minimized. Retired people living at home should have groceries and other essentials delivered to their home. When possible, they should meet family members outside rather than inside. A comprehensive and detailed list of measures, including approaches to multi-generational households, can be implemented, and is well within the scope and capability of public health professionals.

Those who are not vulnerable should immediately be allowed to resume life as normal. Simple hygiene measures, such as hand washing and staying home when sick should be practiced by everyone to reduce the herd immunity threshold. Schools and universities should be open for in-person teaching. Extracurricular activities, such as sports, should be resumed. Young low-risk adults should work normally, rather than from home. Restaurants and other businesses should open. Arts, music, sport and other cultural activities should resume. People who are more at risk may participate if they wish, while society as a whole enjoys the protection conferred upon the vulnerable by those who have built up herd immunity.