There is now a mad rush for kids to get COVID vaccines, despite the fact that Xi’s Omicron variant is quickly crowding out the Delta, and the jab doesn’t seem to slow the new variant down much.

Officially, no direct connection has been drawn yet between eight kids in the 5-11 age range getting heart inflammation, despite one of their common denominators being the fact that they all got vaccinated. Making such assertions with any certainty takes time and significant sample sizes.

But we also know that the current understanding of myocarditis risks began with seemingly innocuous headlines like this: 18 CT Teens Report Heart Problems After Coronavirus Vaccine that were dismissed as ‘relatively few’ and dismissed as not a significant risk. If you click through, you will see that no link to the vaccine had been established then, either.

But it wasn’t long before reports did come back that myocarditis really is a risk associated with the vaccine, and that some of the effects of myocarditis have been serious indeed. In Canada, a waiver needs to be signed by young males in a certain age group before they can even take it, and others.

Here is what the CDC has said about these latest cases.

…A CDC safety group said earlier this year that for teens and young adults there is a “likely association” between the rare heart inflammation and a second dose of a COVID-19 vaccine.

The lesson we learned from the myocarditis discovery last May — too late — was that the risk-reward ratio for some groups had been badly miscalculated. On later reflection, young men of certain demographics were told to avoid certain versions of the vaccine for safety reasons.

Are we repeating past mistakes?

Despite those lessons from recent history, we’re still charging ahead with offering the vaccine to a broader and broader scope of people, even when there are stories that raise serious questions about what kind of protection the vaccine actually provides going forward to 2022.

Stories like this one run in Bloomberg, neatly summarized thusly:

We’re caught up in an emotional response to the virus. We’re charging blindly ahead in panic, insisting that younger and younger people get more and more vaccines. (Pfizer is currently in the process of rolling out the next set of must-have vaccines for the under-five crowd!)

It’s a good gig if you can get it:

Instead of getting caught up on emotional hype, which tends to lead to poor decision making, how about we slow down, absorb the information we have about both the virus and the vaccine to date, and recalibrate our plan.

Is our current plan even working?

Before doubling down on what we’ve been doing all along, shouldn’t we look back and check our progress so far?

If shutting the world down really did make the difference our experts claimed, it would follow logically that statistics could show us to be in much better shape than countries that did not.

Fortunately, there is an objective way to measure this sort of thing.

The Financial Times, for one, has a tracker tool that lets you compare the relative success or failure of various nations or various American states in dealing with the Chinavirus by a variety of metrics.

The link above shows the ‘interesting’ results for fields we punched in both internationally (from the top of that page) and domestically (further down).

Looking at these two graphs of fatalities for the last year, do you notice anything interesting? 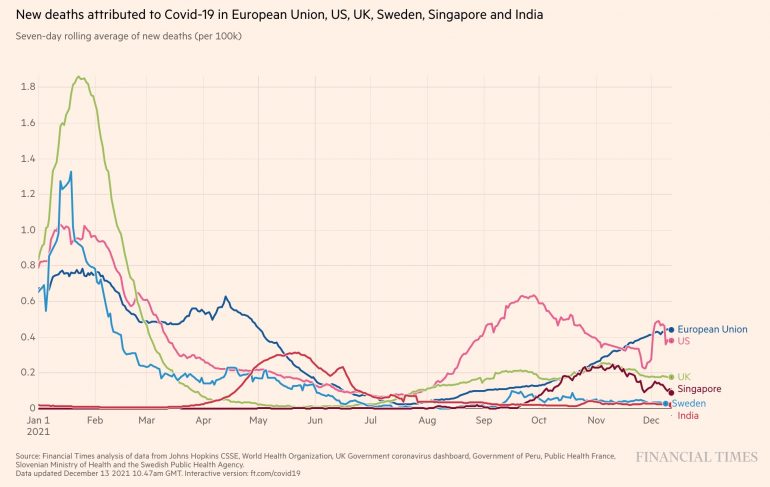 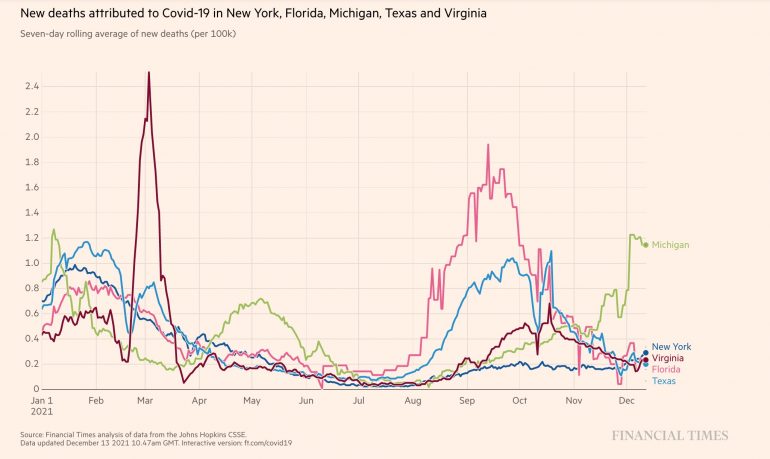 Remember, we have previously reported that some countries — including some on this list — were turning their backs on the whole Chinavirus panic model. FEAR Vs. HOPE: Two Very Different Government Approaches To Pandemic Messaging 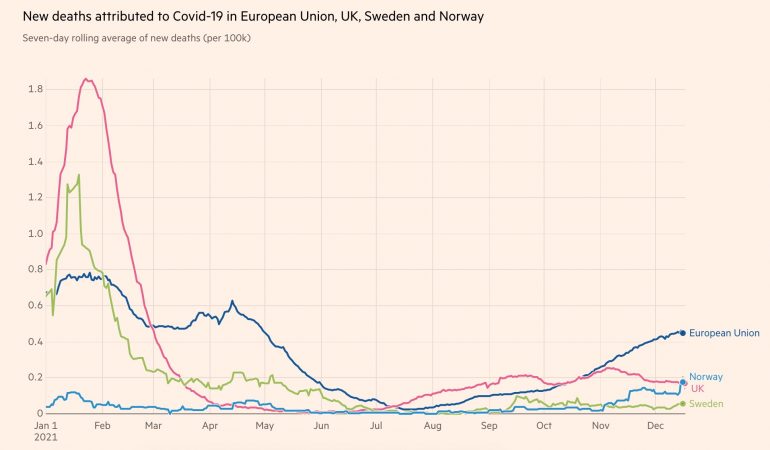 If we must all believe the science, as is devoutly claimed by zealots following the new pontiffs of scientism, this data point — combined with our new understanding of potential risk to the hearts of young children, and other new details we’re learning about Xi’s Omicron — needs to thrown into the conversation as we consider the best path forward.

We have come a long way with mastering therapeutics, and a new study, if it pans out, may show even greater promise of putting a simple OTC treatment within easy reach of the average person.

Is the risk of this new variant really worthy of Manhattan-Project levels of response? Or is it on its way to becoming like so many other respiratory diseases we have learned to live with?

This brings us back the question — is risking our children’s health to ‘slow the spread’ really worth the tradeoffs?