The difference in the two letters that this Angel Mom received couldn’t be any more stark… and she’s not the only one.

You may have seen Virginia Krieger, an “Angel Mom” when she was on Justice With Judge Jeanine in early December. Krieger’s 26-year old daughter Tiffany died in 2015 after taking a counterfeit Percocet that was laced with fentanyl.

Here she is on Fox News:

Krieger is now an activist who is “devoted to raising public awareness of the dangers of black-market fentanyl” according to her LinkedIn page. She’s the President/CEO of The Fentanyl Awareness Coalition (The-FAC), Founder P-A-I-N Parents Against Illicit Narcotics and warns that it isn’t just drug addicts that die from fentanyl poisoning.

As a grieving mother and committed activist, she wrote letters to both the Trump and the Biden administrations to ask them to address the issue of fentanyl that is coming across the southern border and is being taken by unsuspecting people thinking it’s something else.

On Thursday, Krieger shared photos of the two responses she received from each President. One was sympathetic and addressed her loss, the other looked like a form letter. Can you guess which one is which?

Here’s the one she received from President Biden via email. 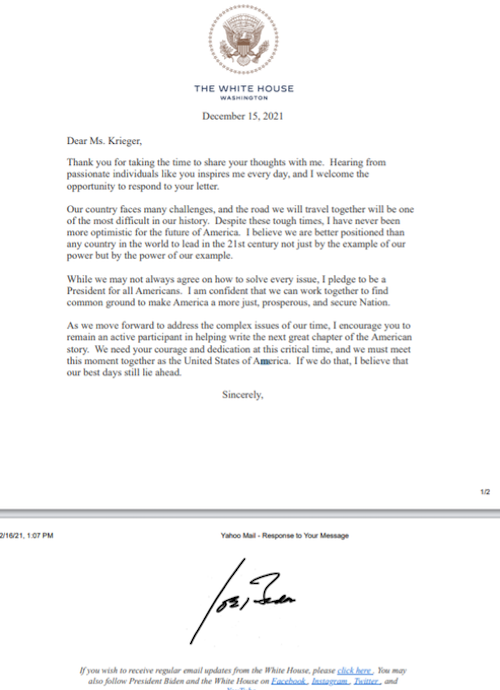 Thank you for taking the time to share your thoughts with me. Hearing from passionate individuals like you inspires me every day, and I welcome the opportunity to respond to your letter.

Our country faces many challenges, and the road we will travel together will be one of the most difficult in our history. Despite these tough times, I have never been more optimistic for the future of America. I believe we are better positioned than any country in the world to lead in the 21st century not just by the example of our power but by the power of our example.

While we may not always agree on how to solve every issue, I pledge to be a President for all Americans. I am confident that we can work together to find common ground to make America a more just, prosperous, and secure Nation.

As we move forward to address the complex issues of our time, I encourage you to remain an active participant in helping write the next great chapter of the American story. We need your courage and dedication at this critical time, and we must meet this movement together as the United States of America. If we do that, I believe that our best days still lie ahead.

And here’s the one she received from former President Trump in 2018: 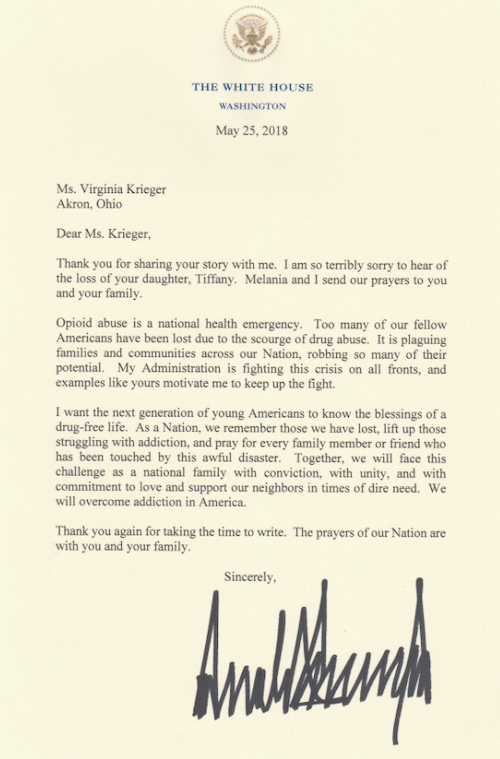 Thank you for sharing your story with me. I am so terribly sorry to hear of the loss of your daughter, Tiffany. Melania and I send our prayers to you and your family.

Opioid abuse is a national health emergency. Too many of our fellow Americans have been lost to the scourge of drug abuse. It is plaguing families and communities across our Nation, robbing so many of their potential. My Administration is fighting this crisis on all fronts, and examples like yours motivate me to keep up the fight.

I want the next generation of young Americans to know the blessings of a drug-free life. As a Nation, we remember those we have lost, lift up those struggling with addiction, and pray for every family member or friend who has been touched by this awful disaster. Together, we will face this challenge as a national family with conviction, with unity, and with the commitment to love and support our neighbors in times of dire need. We will overcome addiction in America.

Thank you again for taking the time to write. The prayers of our Nation are with you and your family.

What a stark difference! The letter from Trump addressed the issue that Krieger was writing about, but also was personalized by mentioning Kreiger’s loss and even using Tiffany’s name. Very classy.

In contrast, the letter from Biden didn’t even acknowledge what it was that Krieger was writing about and instead was this general message of “we’ll get past these challenges as a Nation.” It was cold and impersonal.

2) I honestly don’t know which is worse, the fact that our President completely ignored my pain of loss or that myself and our other grieving families, who received similar responses weren’t even worth the value of a U.S. postage stamp to send us a real letter instead of an email

In her brief tweet thread, Krieger said that other Angel families she knows received form letters from the Biden administration.

This form letter included references to Biden’s “build back better” agenda, the American Rescue Plan, expanding the Affordable Care Act, Medicare, and Medicaid. It also mentioned vaccines, which has zero things to do with the fentanyl crisis.

4) I really wish I could say this was just a mistake but it’s not. Another of our bereaved mother’s also received a form letter after begging for help 10 days ago. I urged our families to write to the POTUS for help and all we got in return was more pain. https://t.co/Te9IEmjg9J

This is the “compassionate” and “humane” Democrat party that sends out form letters to bereaved families that push its own agenda and ignore the issues brought forward by Americans.

Thought for the day: Perhaps those on the left simply assume that Republicans don’t have compassion because they don’t see it in their own politicians.