Brown is the 28-year old NASCAR driver whose interview after winning the Xfinity series in Talladega sparked the “Let’s Go, Brandon” revolution when NBC sports reporter Kelli Stavast mistook the “F**k Joe Biden” chant for what has now become the PG version.

As we noted in the article, in a moment of raw emotion, Brown shouts, “Let’s Go!” after his thrilling win which was perhaps what prompted Stavast to say that the crowd was chanting, “Let’s Go, Brandon.”

It’s hard to believe that the “Let’s Go, Brandon” movement only began in October.

It’s also hard to believe that it’s been two months and the Shambling Husk of Mediocrity is still oblivious to it.

That must be what happens when you are completely out of touch.

Meanwhile, the hoi polloi know exactly what “Let’s Go, Brandon!” means and it’s not exactly been a smooth ride for Brandon Brown.

Just before Christmas, Sports Business Journal reported, “NASCAR driver Brandon Brown unintentionally helped spark the viral ‘Let’s Go Brandon’ catchphrase, and while many have profited off of it, he says the situation that has made him famous has ironically also hurt his marketability.”

The problem seems to have been solved.

In a press release on Thursday, Brandonbilt Motorsports announced that Brown has secured sponsorship for the entire 2022 season with the cryptocurrency that bears the meme that has made his first name famous.

The partnership marks the latest crypto outfit to back a NASCAR driver and team, a growing trend not only in motorsports but across all professional sports leagues. In 2022, BMS driver Brandon Brown will sport an eye-catching red, white, and blue livery with the logo and wordmark of LGBcoin aboard his No. 68 Chevrolet Camaro for all 33 races of the NXS season.

LGBcoin is a new, decentralized meme cryptocurrency similar to other meme coins and tokens such as Dogecoin and Shiba Inu, that has achieved a market capitalization of more than $300 million in less than six months. The patriotic coin dubbed “America’s Coin” aims to inspire positivity and unity, grounded in a strong belief of the American dream.

Brown unveiled his new red, white, and blue Camaro in a video, and it’s pretty sweet.

I’m excited to welcome @LGBcoin_io aboard my No. 68 Chevrolet Camaro as our 2022 NASCAR Xfinity Series full season primary partner!

The reason people are chanting “Let’s Go, Brandon” (and “F**k Joe Biden” for that  matter) is because it’s such a stark contrast to the previous administration.

This photo sums it up: 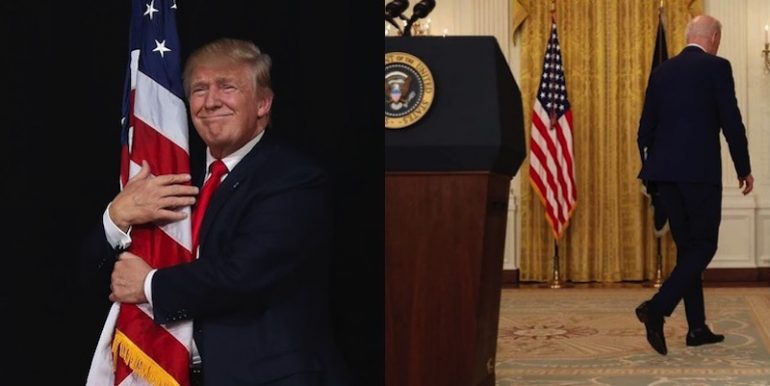 The branding that LGBcoin is doing is absolutely genius — “America’s Coin backs America’s Driver” with full-on red, white, and blue and a big ol’ flag. 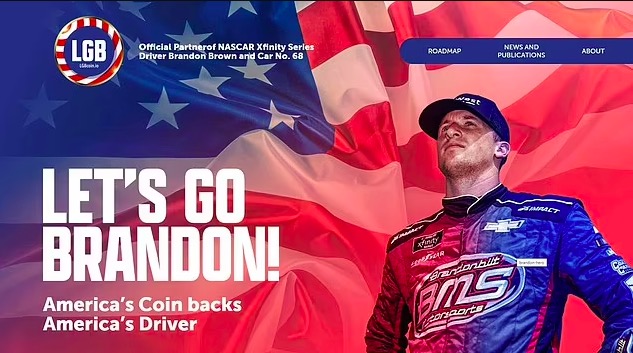 The cheer is the branding.

It taps into the 2016 “Make America Great Again” momentum while simultaneously thumbing its nose at the Corporate Media and a President that has openly repudiated the MAGA message.

‘We are proud to support Brandon this season, to help him continue his American dream,’ James Koutoulas, LGBcoin HODLer and founder of Typhoon Capital Management, said in a press release.

In wake of the new sponsorship, Brown – who is being referring [sic] to as ‘America’s Driver’ by the cryptocurrency – will sport a red, white and blue Camaro with the logo and wordmark of LGBcoin during the upcoming season.

After securing funding from a portfolio of crypto entities this past year, he is now the first NASCAR driver to land multiple crypto deals.

He also distinguishes himself as an early attractor for meme and crypto partnerships.

Brown is finally getting some benefit from the meme that made him famous, and it’s really nice to see.

‘Having the financial support of LGBcoin is incredible, especially at such a pivotal time in our team’s growth as we work to build to the next level of competition,’ the pro-racing driver said.

‘From wondering if we would have the financial means to continue to compete, to my first major win (at Talladega no less), to becoming an unintentional meme, this past season was a rollercoaster.’

Brown continued: ‘The support of sponsors like LGBcoin empowers us to be as competitive as possible and I’m looking forward to competing hard on the track in 2022.’

If that’s not the American spirit, I’m not sure what is.