Brian Stelter knows that media credibility is on the ropes and embarrassingly easy softball questions for Joe Biden have done nothing to dispel that notion.

But to protect the brand — and to lift up Biden with Trump as his foil — Stelter cherrypicks a guest who’s lockstep with the Dem-Media narrative. He brings in someone who agrees with the premise that the media has been really hard on Joe Biden, far more than they have with the — here it comes — ‘fascist’ Donald Trump.

CNN’s @BrianStelter promotes Dana @Milbank column, “The media treats Biden as badly as — or worse than — Trump. Here’s proof.” Stelter: “Is that possible? Does it ring true to you? I think it rings true to my next guest.” That’s @EricBoehlert pic.twitter.com/5baXPdLKQo

Seriously? You just couldn’t resist the empty virtue-signaling swipe at the guy who is NOT making any of the decisions that have given us our several current crises?

Yep, that’s some super-serious ‘journalism-ing’ you’ve got going on there, Mr. Potatohead. 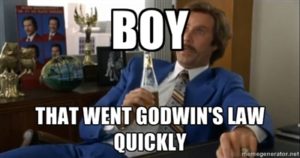 This is really the best your crew has got over there at CNN? We’re embarrassed for you since you don’t have enough dignity to be ashamed of yourself.

We COULD treat his statement the way we would a serious argument and rip it apart it with examples like the Harvard study that showed extreme media bias against Trump in his first year by every outlet except Fox whose coverage was about half-and-half positive and negative. RELATED:Winning: Trump Numbers Rising While Media Coverage Tilts Even More Negative

And we COULD follow that up with evidence that there was a coordinated plot by Clinton Flunkies at Media Matters to have a daily drip of negative press, endless criminal allegations, attempts to impeach Trump, and coordinated fact-checkers to discredit the right-of-center outlets… published while Trump was still president-elect. RELATED: CIVIL WAR: Remember, THIS Is What Silicon Valley And Some Key Bernie Bros WANTED

But ClashDaily has covered that ground before.

This time, we’re going to take you behind the curtain to see exactly how the media echo chamber that Obama’s Ben Rhodes bragged about leveraging for the Iran deal actually works.

Stephen Miller, a contributing editor for The Spectator did an excellent job of explaining how this is an example of a “closed media feedback loop.”

(Try to ignore the typos, Twitter has no edit button.)

1. Someone writes an insane easily debunked column like Milbank

2. But people like Jong-Fast at The Atlantic or Margaret Sullivan at Wash Post retweet or take it seriously

3. Media's janitor amplifies it because these are friends. https://t.co/EUnQSc1k14

This is the thing – Stelter's show isn't for the audience. Its not for viewers. It's nog ti inform. It's to tell his friends how right they are. He's monologging for them. That's it.

Except 85% of viewers/country no longer read, trust or even like him or his friends.

Why did CNN get so absolutely enraged when Trump called them out as ‘Fake News’?

Because Trump had pulled back the curtain so all the world could see that the ‘great and powerful Oz’ was just some cheap charlatan yelling into a loudspeaker.

Trump didn’t wilt and bend the knee when the media threatened to ruin his reputation. He taught others how to stand strong in the midst of their abuse.

It robbed them of their power, and they hated him for it.