What a surprise. Folks from the same political party that gave us the Japanese Internment Camps are happy to justify the ‘free holiday’ forced COVID detention camps give you.

To hear all the lockdown fanboys tell it, Australians are getting two weeks of glorious vacation at the government’s expense.

Here’s someone with social influence weighing in blowing it off as no big deal. (She fails to mention that these photos are most likely from the Olympians who used the same space to self-isolate before it was used as a place to hold citizens — even those with multiple negative tests — imprisoned against their will. 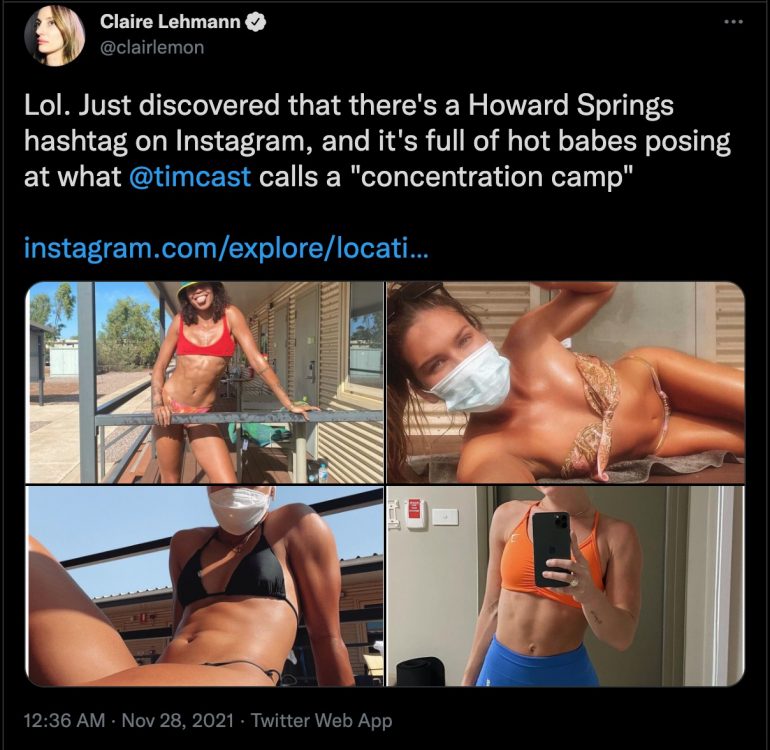 It’s such a wonderful holiday spot that COVID-negative people are escaping from it… and when caught, are dragged back there, kicking and screaming. Then get fined thousands of dollars for the privilege.

Three teenagers tried to escape from Australia’s Howard Springs COVID-19 detention camp. They were captured and each tested negative for COVID-19. However, they’ve been returned to detention and will each have to pay multi-thousand-dollar fines.
https://t.co/EWC488tH8H pic.twitter.com/ZfBm1G2QYu

You know the panic has gotten out of control when they prioritize this health scare above minority rights — especially aboriginal rights.

Let’s look behind the curtain and see what someone who’s received an ‘invitation from the government’ to attend this happy resort has to say about it.

Plainclothes police showed up at her house after she gave someone a ride on her scooter because they traced the scooter’s license plate. They detained her, and told her that someone would be coming by to give her a covid test. They never did. Instead, uniformed police showed up and made her choose between being brought to the Howard Springs detention facility by the cops — and facing a $5000 bill for the privilege — or calling a ‘covid cab’.

Once she was there, she was dropped off in her little living space, which includes a little balcony that she can’t step off of without a mask — even with nobody nearby. Breaking that rule invites another $5000 fine.

She took a total of 3 tests for the virus, all of them came back negative, but that didn’t matter. She was still obligated to remain there for the full 2 weeks.

She lost her job in the process, and when she called their CDC, it turns out that she didn’t get to self-isolate like many others have because someone decided to punish her for noncompliance.

As far as holidays go, this hardly sounds like a trip to Miami.

Notice what she says about the psychological impact of having her freedoms arbitrary ripped from her… and this is something that COVIDictators want to normalize in society???